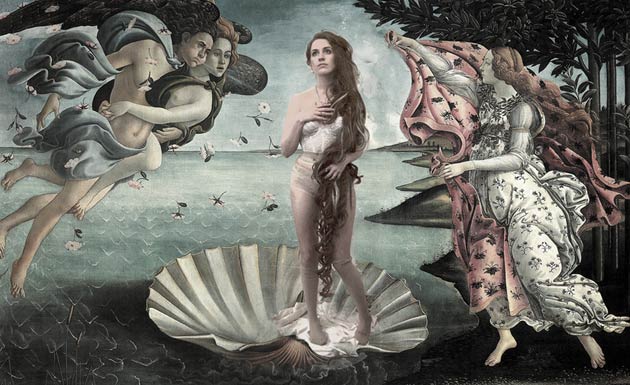 Taxidermy and jewellery couldn’t be more polar in their opposites but they collide and combine in Tessa Metcalfe’s unique jewellery.

Both a taxidermist and jeweller by profession, Tessa Metcalfe is controversial as she is creative and belongs to a cutting edge genre of artists from Hackney in London. Already making a name for herself in both the art and fashion worlds with her experimental jewellery designs, her debut jewellery collection entitled ‘Homage’  is based on a fantasy London underworld where pigeons rule the roost and their feet are turned into a precious talisman of the city. 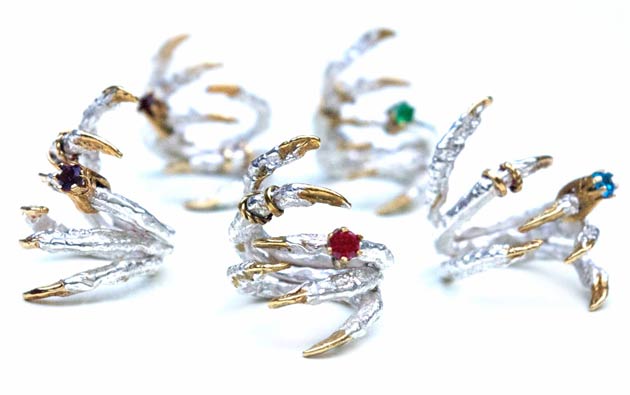 London pigeon’s feet are cast in silver before having their nails gold plated by hand, the surprise being the individually made miniature rings adorning the pigeon claws hinting of human-like desires within the birds. A ring titled ‘The Pearl of London’ has gold claws playfully spinning a pearl within its grasp. A large statement necklace made from two silver claws holding hands creates a structurally symmetrical piece, completed with her charming touch of a gold ring set with a pink stone. The pleasure in her work is all over the bold, androgynous creations.

Tessa Metcalfe says “my most powerful childhood epiphanies came during the stories of Leda and the Swan and The Ugly Duckling. I believe in both myths and legends and I want to combine the two creating a little dream to carry with you.”

“My dad eats roadkill, so I’ve always been around dead animals, I’ve never thought twice about handling them…I found a dead pigeon 4 years ago so took it home and made it into a hat which got me a bit of attention.” 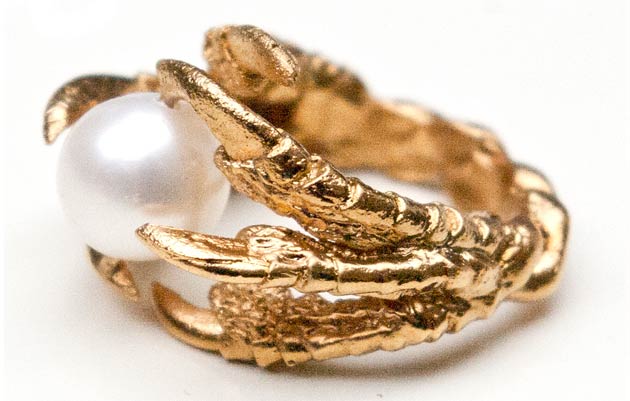 Having made the transition to jewellery from taxidermy and encompassing her art school background, Tessa Metcalfe is the winner of the 2013 Professional Jeweller ‘Treasure’ award and pieces boast a place in the collections of America’s Next Top model stylist Tamra Natisin, Skrillix artist of the moment Sirah, lead singer of The King Blues, Itch, and UK pop sensation Rita Ora.

Now who said beautiful things had to be made of sugar and spice and all things nice?

See more beautiful pieces by Tessa Metcalfe in the video below