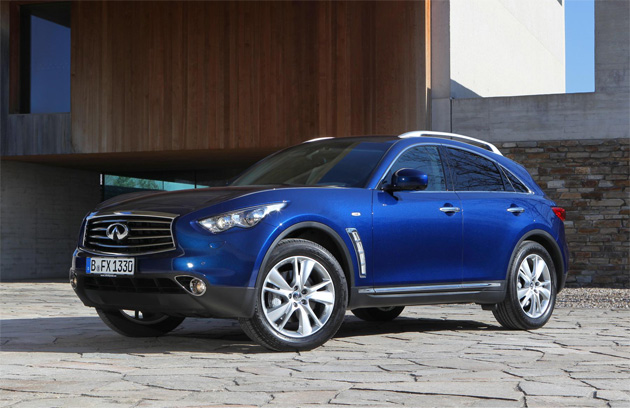 After four successful years as Infiniti’s icon and top-selling model in Europe, the Infiniti FX for 2012 is bolder and more distinctive than ever.

The FX’s first makeover since UK sales began in 2009, a package of enhancements brings a new focus to its unique blend of passionate design, inspired performance and modern luxury. In short it gets more of the FX DNA that has been so popular with buyers across Europe – with sales up 31% in 2011 in a market sector down 7%.

The 2012 range comes at unchanged 2011 prices, also unchanged: the stirring performance, rewarding handling, award-winning technology and five-star safety and standard equipment at the heart of every FX. More akin in appearance to a sports car than boxy crossover, the FX for 2012 boasts even more street presence than the outgoing version thanks to carefully-wrought changes to the front-end design, along with bold new colours and an exclusive new design of alloy wheel. The expressive new look has been achieved by reprofiling the bumper section and subtly changing the grille, based on a design explored by the influential 2009 Infiniti concept car, Essence. Sporting appeal is reinforced on GT and GT Premium derivatives with a new five double-spoke design of 20-inch wheel. S versions, with the availability of Rear Active Steering (RAS) among a long list of handling-oriented features, stay with their distinctive 21-inch wheels. More choice for FX owners is offered with the latest exterior paint colour, Iridium Blue. It is Infiniti’s newest Scratch Shield finish and available exclusively on the FX. Graphite Shadow is also additionally available on all FX models.

“Buyers love the way the FX looks and they love the way it drives so the last thing we are going to do is make changes for change’s sake,” said Bernard Loire, Infiniti Vice President for Europe and Middle East. “What we have done instead is focus on reinforcing FX DNA.”

S versions are more overtly sporting and come with Rear Active Steering (except FX37) and Continuous Damping Control, among other changes. They are set apart by their 21-inch alloy wheels, smoked headlights, red S badging and dark chrome exterior air vent and sill strip. Premium versions of both the GT and the S are possibly the most comprehensively equipped cars in their class.  Their specification majors on technology with standard equipment including advanced navigation and entertainment systems, along with a suite of safety features such as the Euro NCAP award-winning Lane Departure Prevention. Both petrol and diesel V6s are available in Premium guise, along with the 385bhp (390PS) 5.0-litre V8 of the FX50 performance flagship, available in S Premium guise only.

Every FX is equipped with Infiniti’s intelligent torque-sensing all-wheel-drive system as well as a 7-speed adaptive shift automatic transmission. Solid magnesium gearshift paddles on the steering wheel of every model demonstrate both the FX’s manufacturing integrity and its performance personality. The 2012 range of Infiniti FX models is available at Infiniti Centres across Europe now. As announced at the Geneva Motor Show in March, pre-ordering for the pinnacle of the range, the FX Vettel Version, has now begun. Just 200 of the 420PS V8 models will be availableworldwide, with first customer deliveries due in 2013. More information on the FX Vettel Version will be released soon.