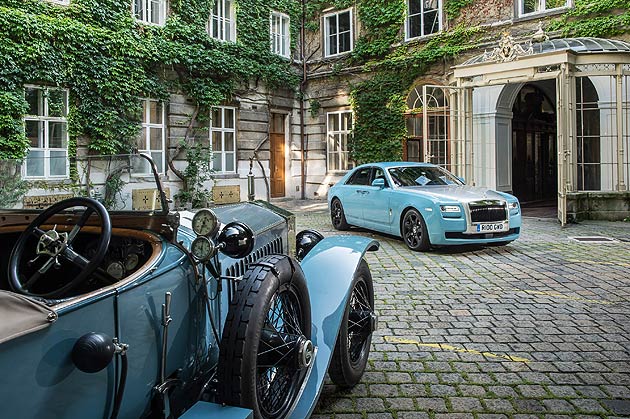 As many of you will have seen, Luxurious Magazine has eagerly followed the Centenary Alpine Trial from race preparation to the finish line. We looked in awe at the range of wonderful Rolls Royce vehicles from various decades that took part, the attention to detail paid by the participants in their costumes, thrilling the many international fans of this iconic motor manufacturer during the tour. We were obviously delighted to hear that the 2013 Centenary Alpine Trial, won Best Rally or Tour of the Year at the prestigious International Historic Motoring Awards in London.

Reliving events of one hundred years ago, a Rolls Royce Works Team took part in the trial. The original James Radley 1913 Silver Ghost was joined by a contemporary homage created by Bespoke designers and craftspeople at Goodwood, the Home of Rolls Royce in England. Finished in an exterior light blue hue that takes inspiration from the Radley car, the 2013 Alpine Trial Centenary Ghost features exquisitely crafted Bespoke touches that elegantly tell the story of the 1913 Trial. The clock displays the stages of the rally and timings, whilst inlays to rear picnic tables and the front fascia express the topography and distances of the Alpine route. A hand painted coach line referencing the four Rolls Royce motor cars that took part in the 1913 Alpenfahrt and headlining, colour matched to the hood of the Radley car, completes a beautiful tribute.

The International Historic Motoring Awards are the most coveted awards in the classic car industry, showcasing excellence, rewarding innovation and providing the benchmark by which the world of historic cars judges itself. The Best Rally or Tour of the Year 2013 trophy was received by Nick Naismith and Tim Forrest of the 20 Ghost Club at the event last night.

The 1913 Radley car and the 2013 Alpine Trial Centenary Ghost will be reunited at the BMW Museum in Munich on Friday 22 November 2013 for the unique Night of the White Gloves, where visitors are issued with white gloves and invited to explore the cars close up. Both cars will remain on display until the New Year.