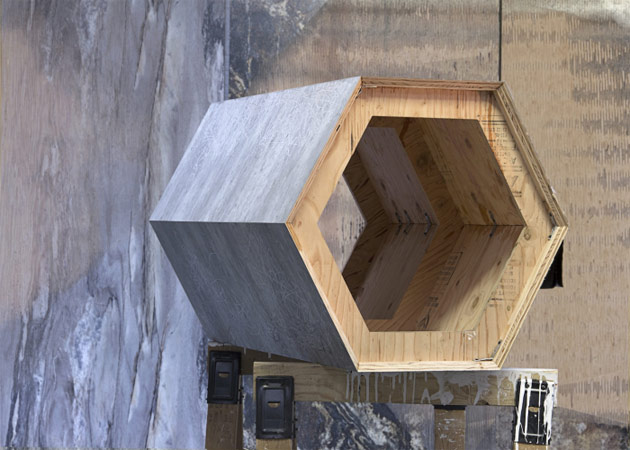 The Galerie Nathalie Obadia Brussels will be hosting the 4th solo show by Michael DeLucia in Europe since they collaborated for the first time in 2008.

The twenty or so works on show illustrate the young American artist’s most recent researches. They override everyday objects, the theme of the artist’s latest exhibition, to explore new forms derived from nature and a new industrial material, laminate, better known as Formica.

The one constant is the creative process. The artist uses a computer to produce his design, which is then processed using three-dimensional modelling software. The resulting forms are printed in high definition on plywood panels, and then engraved into the material using a mechanized arm. The engraving process, which is simultaneously digital and mechanical, brings out the hollow pattern given material shape by the natural colour of the wood clad in a layer of laminate imitating coloured stones.

Two new themes, cloud and rock, allow Michael DeLucia to extend his researches on the informal. Once they have been modelled by the software, the two elements, which in nature are complete opposites (water/rock), become startlingly similar in the digital state. This transformation, which is a source of confusion, challenges the viewer in three different ways: visually, physically and mentally. This threefold experience under the aegis of the phenomenological is in keeping with the tradition of New British sculpture, whereby artists from Henry Moore to Tony Crag invented a sculptural language which was first and foremost sensory. Following this unifying historical thread, Michael DeLucia, dubbed ‘the first sculptor of the virtual world’ by Pierre Sterckx, constantly chips away at the taut boundary between the material and the virtual, between the physical object and the digital form. This is an intuitive form of exploration which the artist ties in with Plato’s Allegory of the Cave, a metaphor for the visible world where men think they can access the truth via their senses. The Greek philosopher’s illusory quest morphs into the American sculptor’s simulacrum of reality.

Michael DeLucia makes use of trompe l’œil to magnify his works. Their underpinning of rough plywood, referencing Arte Provera, which also used poor materials, is lifted by the layer of laminate coloured to look like marble, granite, agate or petrified wood. The colours add a further level of abstraction, leading the viewer towards a mental reconstruction of the pattern and an additional experience of form which overflows the structural limits of the sculpture or the wooden panel.

The use of laminate, like the Formica in the works of Richard Artschwager (1923-2013) from the 1960s, combined with the subversion of everyday objects (office chairs, lamps, car tyres) forms a historical link to Pop Art. A second line of kinship can be identified with Sol LeWitt or Donald Judd’s Minimalist Art, through the use of elementary geometrical shapes such as the circle, the square or the rectangle, whose simple material essence is so impressive when transposed on to wood or Formica.

The effect sought after on shapes directly inspired by nature, experienced for the first time in the Brussels exhibition, offers Michael DeLucia some fresh prospects, simultaneously graphic and sensory. These bring the viewer up against the tangible and virtual duality of the modern world.

The Michael DeLucia monograph will be published in the spring of 2015, and followed directly by the first solo show devoted to the artist by a museum at the MCA (Museum of Contemporary Art) in Santa Barbara, in the summer of 2015.