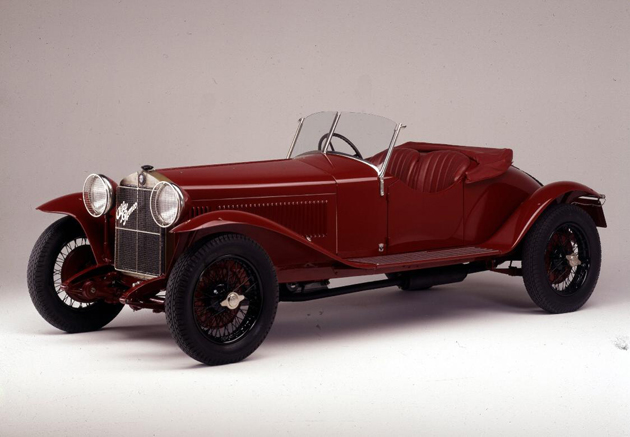 For the 2012 Mille Miglia tribute, the Alfa Romeo Historic Motoring team will be lining up four official Museum vehicles, two pre-war – the 1500 SS and the 1750 GS – and two models from the 1950s – the 1900 SS and the 2000 Sportiva – which took part in the Mille Miglia race between 1927 and 1957, a classic event which resulted in 11 victories for Alfa Romeo – a record which remains unbeaten.

The Mille Miglia 2012 (16-20 May) is being held in a year packed with Alfa Romeo anniversaries. In addition to the Giulia’s 50th birthday and celebration of the Alfetta’s 40th, it is the 80th anniversary of the first win of an 8C in the Mille Miglia. In 1932 Baconin Borzacchini and Amedeo Bignami crossed the finish line in Brescia aboard an 8C 2300 followed by a sister car and another five Alfa Romeos that filled the top order up to seventh place.

The 6C 1500 Super Sport of 1928 (Stabilimenti Farina bodywork) is the first turismo model of the Jano era. The 1500 made its début in 1927 by winning at the Modena Circuit with the team of Enzo Ferrari–Giulio Ramponi. It won the first of 11 Alfa victories at the Mille Miglia the following year, with Giuseppe Campari and Giulio Ramponi, who clinched the win with a car similar to the Alfa Romeo Museum example.

The 6C 1750 Gran Sport of 1930 (Zagato body) is a car that became a legend at the Mille Miglia. Tazio Nuvolari and Giovanni Battista Guidotti won in 1930 with a 1750, and it was at this race that the driver from Mantua beat the record of 100 km/h average speed over the entire course. The contrast with Achille Varzi – also behind the wheel of an Alfa Romeo 1750 – was the leitmotif of the race, which reached its climax with a legendary overtaking manoeuvre with headlights off, to the detriment of the driver from Galliate.

The 1956 1900 Super Sprint is an elegant coupé with a body of a Touring car typical of the 1900s, a prestigious gran turismo in the 1950s and the top of the Alfa Romeo range at the time (the “family saloon that wins races”). The 1900 SS took part in a large number of Mille Miglia races. It was the favourite car of many privateers because it guaranteed an effective blend of performance and reliability.

The 2000 Sportiva completes the team of Alfa Romeo Museum cars – an exclusive gran turismo sporting group with glamorous and dynamic lines. The Sportiva was designed by Franco Scaglione, the same designer who created the Giulietta Sprint and the 33 Stradale. From a mechanical viewpoint, the 2000 Sportiva was derived from the 1900, with the sophistication of a rear De Dion axle, a solution that was adopted on the Alfetta saloon 20 years later.

The official historic Alfa Romeo Museum cars will be accompanied by a fleet of Alfa Romeo Giulietta 1.4 MultiAir TCTs, the car that boasts the best efficiency to performance ratio in its category. It possesses extraordinarily low fuel consumption and emissions (54.3mpg in the combined cycle and 121 g/km of CO2 emissions) and at the same time outstanding performance worthy of an Alfa Romeo: a top speed of 135 mph and 7.7 seconds to go from 0 – 62 mph. In detail, the innovative Alfa TCT double clutch gearbox works either completely automatically or sequentially, through manual control of the up and down positions of the gear lever using the shift paddles on the steering wheel. In addition, the driver can customise the car’s character using the Alfa DNA driving selector to enhance its features of comfort, performance, safety and efficiency.