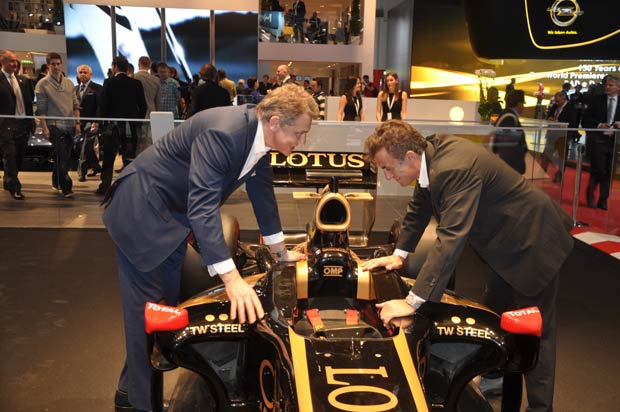 First model of the F.P.Journe “lineSport”, the Centigraphe Sport, is made entirely in aluminium – just like the first Lotus to win the Indy 500.

F.P.Journe has launched the first collection of ultra lightweight state-of-the-art mechanical sports wristwatches. A world first, they feature a new allaluminium alloy case, bracelet and movement. Available both with automatic and manual winding, the lightweight lineSport is in keeping with the philosophy of motor racing pioneers Lotus, of which F.P.Journe is a partner at this year’s famous Indianapolis 500. 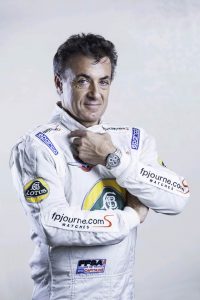 There will be a double premiere as Formula One legend Jean Alesi is entering the Indy 500 for the first time in his celebrated career, and for F.P.Journe that will emblazon its colours on the black and gold Dallara. The British marque won the race in 1965 with the groundbreaking Lotus 38 – the first mid-engined car to win at the Brickyard. Now, of course, all single-seat racing cars are mid-engined. Lotus set the trend, as did F.P.Journe with its new lineSport.

F.P.Journe shares Lotus founder Colin Chapman’s quest for lightness, innovation and engineering excellence. Painstaking research into light, yet resistant materials, as well as the highest standards of Swiss horology, have led to the creation of the Centigraphe Sport, which Jean Alesi will wear during his historic Indy debut.

The Centigraphe Sport is the first wristwatch made entirely of high-technology aluminium alloy, which is also used in Aeronautics. The movement, case and bracelet are all hewn from this alloy. In the search for absolute comfort and extreme lightness, the timepiece weighs just 12 grams and, including the strap, 55 grams.

The journey from 18K rose gold – used in all other F.P.Journe movements – to aluminium was not without difficulty. F.P.Journe took their research to a higher level in an aesthetic quest to complete an appropriate contrast in colours. F.P.Journe also perfected different methods of special processing in order to make the aluminium scratch resistant and give it anti-corrosive and anti-allergic properties.

Rubber inserts are fixed with an outstanding process to the end of each link of the aluminium bracelet, the sides of the case and the crown in order to efficiently protect the watch from any dents, just like the bumper of an automobile. The folding clasp in aluminium, engraved with F.P.Journe’s signature, is also covered with a rubber coating. In addition, it offers an adjustment system of a half link size (4mm approx.).

The Centigraphe Sport_ a humanitarian watch
With the Centigraphe Sport, F.P.Journe is supporting the people of Japan in the wake of the earthquakes and tsunami that rocked the country in March 2011. François-Paul Journe offered the first Centigraphe Sport timepiece numbered 001 to be auctioned by Christie’s in their Hong Kong sale of May 20, 2011. The total amount of the sale, including Christie’s 20% buyer’s commission, soared to an amazing HK$ 3,620,000 /US$ 465,170 – close to ten times its original estimate. Godfather of the Centigraphe Souverain, Jean Todt remains the initiator of F.P.Journe’s engagement towards the ICM – Institute of Brain and Spinal Cord in Paris – to help fight diseases such as Alzheimer’s, Parkinson’s, and Multiple Sclerosis…

In purchasing the Centigraphe Sport, in line with the Centigraphe Souverain, you are also supporting the medical research carried out by the ICM. Along with Professor Gérard Saillant, Luc Besson, Jean Réno, Jean Todt, Michelle Yeoh and Michael Schumacher, amongst others, François-Paul Journe has committed to the ICM in donating 30% of the profits from the sale of each Centigraphe Sport to the ICM, with no time limit. (www.icm-institute.org)

The hand-wound mechanical movement of the Centigraphe indicates elapsed times on three sub dials from a 100th of a second, 20 seconds, and 10 minutes, each with a time scale in red. 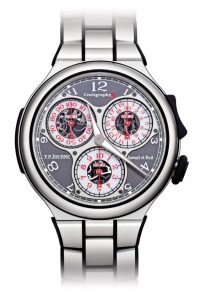 The 100th of a second hand at 10.00 revolves around the dial in one second on a scale marked in hundredths of a second. / On the dial at 2.00, the hand revolves once every 20 seconds on a time scale divided into seconds. / The third dial, at 6.00 is graduated for 10 minutes.

Patented ergonomic chronograph
The chronograph is started, stopped and zeroed by a ergonomic designed rocker at 2 o’clock in the case band, instead of the usual buttons on either side of the crown.

Patented chronograph mechanism
A second patent was granted for the mechanism’s ingenious configuration, which efficiently isolates the chronograph from the timekeeping function. This means the balance amplitude is unaffected when the chronograph is running. The hands of the 100th of a second counter, the 20 seconds, and the 10 minutes hand are driven by 2 different wheel trains, themselves driven by the centre of the mainspring (patented). Another separate train of wheels, also driven by the barrel arbor, drives the 10-minutes hand.

1/100th second recorder hand
The 100th of a second’s hand, released by the watch’s escapement, makes one revolution of the dial per second. A wheel mounted on the escape wheel (4th wheel of the going train) releases the arbor to which the hand is fitted. The seconds are driven by the going train from the barrel, and by the energy of the chronograph train, as transmitted by the barrel arbor. One ingenious feature of the 100th of a second is that it may be stopped anywhere along its one-second journey around its dial, even between two 100th-second divisions, enabling a fractional reading. This is achieved by vertically disengaging the pinion of the 100th of a second hand from that of the escapement, which presses on the pivot shank and acts as a brake.

Return to zero
The 20-seconds hand and the 10-minutes hand arbors are zeroed by hammer levers acting on snail cams. The 100th of a second hand is stopped at zero by a beak protruding from its pinion, which presses on a lever and thus blocks the chronograph train.