Design, photography, sound and film come together for a stellar Royal Oak 40th anniversary worldwide exhibition. To celebrate the 40th anniversary of Audemars Piguet’s iconic timepiece Royal Oak, the world’s first ever luxury sports timepiece which sparked a complete paradigm shift in the watch industry, the Swiss Manufacture from Le Brassus in the Vallée de Joux has put together a unique, ephemeral exhibition. 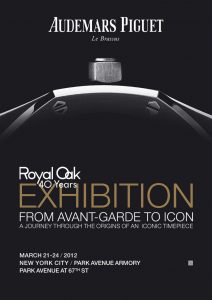 Using design, photography, sound and film from three unequivocally 21st century artists, Sebastien Leon Agneessens, Quayola and Dan Holdsworth, the Manufacture has curated an exhibition of 100 exceptional timepieces set against the backdrop of a stage that underscores Audemars Piguet’s origins, mastery and artistry.

These rare watches, from the very first Royal Oak in 1972 to the latest models unveiled at the Salon International de la Haute Horlogerie, Geneva in January 2012, will be revealed in a series of exhibitions showcasing the brand’s ability to innovate and create. Following Audemars Piguet’s recent partnership with the American Patrons of Tate (an independent charity that supports the Tate Galleries in the UK), this not-to-be-missed exhibition will commence its worldwide tour in New York on March 21st at Park Avenue Armory. Open to the public for four days only, the exhibition will then continue in five key cities and captivating artistic venues around the globe throughout 2012.

To break the rules, you must first master them
40 years ago, Audemars Piguet broke all rules of fine watchmaking when in 1972 it introduced the ground-breaking design of the Royal Oak, the first luxury sports watch in Haute Horlogerie. 40 years on, the four characteristics that defined this timepiece and the luxury watch industry are even more than ever recognisable; the octagonal bezel fixed with the hexagonal screws, one of the thinnest selfwinding movements, the seamlessly integrated to the case bracelet and the tapisserie pattern on the dial.

This exhibition – created, developed, and globally executed by MA3 Agency – captures and illustrates how the Royal Oak became the icon it is today, by reinterpreting the origins and modernity of Audemars Piguet through the innovative and contemporary perspective of artists Sebastien Leon Agneessens, Quayola and Dan Holdsworth. The exhibition installation, photography, sound and film of the three artists create an ambience that is sure to immerse every visitor deep in the Vallée de Joux, the birth place of Haute Horlogerie in Switzerland, while also illustrating its story like it has never been shown before.

The Vallée de Joux in the Swiss Jura mountains has for millennia been a harsh and unyielding environment, a place of raw nature and unforgiving climate. It was not until the sixth century that monks first settled in the Vallée as they saw in its austere surroundings a place of serenity and spirituality. It is also the home of Audemars Piguet since 1875, in the village of Le Brassus. The early watchmakers worked the land during summer while during winter, by the even, Northern Light, they concentrated on mastering the most complex mechanisms known to watchmakers. Throughout the centuries, the pursuit of excellence and building a long tradition in mastery and artistry in fine watchmaking have been values that have remained at the core of Audemars Piguet’s existence until today.

Sebastien Leon Agneessens, the creative mind behind the overall design of the exhibition, drew his inspiration from the origins of the brand in Le Brassus. Hundreds of tubular sticks of different heights symbolising the forests of the valley area are treated as organ-like sound sculptures surrounding the exhibition area, which is made to resemble a fragmented mineral rock typically found in the Vallée de Joux and symbolizing Audemars Piguet. The angular and multi-faceted exterior of each of the fragments and its dark reflective metal surface inspired by the Royal Oak creates a natural contrast with the wooden interior which reflects Audemars Piguet’s long tradition and humble origins.

Each of these fragmented units is a journey of discovery of the origins and savoir-faire of the brand. Apart from 100 iconic timepieces and invaluable memorabilia dating back to the beginning of the 70s, the visitors will also have the opportunity to visit a watchmaker’s area including a brocading dial machine where they could closely observe the artistry of Audemars Piguet’s craftsmen.

The contemporary lens of photographer Dan Holdsworth captures the terrain of the Vallée de Joux and its special – cosmic – relationship to time. He documents the Valley at its stillest hours, capturing the ancient forests and glacial topography under the celestial presence of mist or moon to convey the extraordinary temporal significance vested in the landscape. This incredible link between nature, man and his creations, the complex movements that have become the beating hearts of each Audemars Piguet timepiece, continues to live in Le Brassus of the 21st century and inspires the watchmakers of today as they pursue their never-ending quest to unravel the mysteries of nature. One of these images has been selected for the new branding campaign of Audemars Piguet, launched worldwide beginning of January 2012.

Quayola’s work for Audemars Piguet 40-years exhibition is a study and celebration of ‘matter’ itself, the substance of all physical objects. The installation focuses on a continuous transformation and metamorphosis of matter: from the grace, complexity and unpredictability of geological forms, to the perfection, beauty and precision of man-made objects of art. Through a process of continuous mutation and metamorphosis it explores simultaneously classical art, 1970s sculpture and contemporary digital aesthetics. Specific sculpture’s have been reinterpreted by the artist as icons of man’s craftsmanship, reflecting on the classical view of man’s mastery over matter.

The year-long celebrations of one of the most iconic timepieces in the word of Haute Horlogerie will take place for a short time only, in iconic buildings of key cities around the world. The exhibition, open to the public, will stop in Milan, Paris, Singapore, Beijing and Dubai.