About the Cameron Highlands Resort 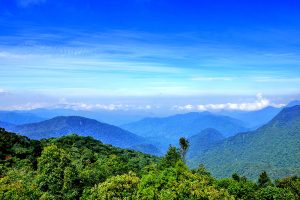 The hotel is located approximately 5000 feet above sea level and has been in situ since the 1930s, starting out as a small 16 room hotel offering rates from a little as $8 per single room and $10 for a double. Over the subsequent 80 years the Hotel has undergone major expansion and improvement into its current impressive proportions with 56 luxurious and character filled rooms consisting of two feature suites (the Cameron and Jim Thompson Suite), six junior suites and a further 48 well appointed luxury rooms.

The Cameron Highlands was first discovered on a British mapping expedition in 1883 by William Cameron hence the name. A favourite destination for visitors to the country, romantics, Malaysian nationals and over the past 70 years, the British Army and Allied Forces who found the cool climate perfect for rest and recuperation with warm Sunny daytime temperatures up in the mid 20s falling to the teens during the evening. Much of the architecture within the Cameron Highlands has been influenced by British and European design, with a liberal smattering of brick built houses strategically located among the hillside greenery providing breathtaking views of the peaks and valleys that stretch out all around you.

The cool climate of the Highlands is also the ideal location for growing organic  produce including strawberries, vegetables, fruit and of course the most famous export of the Highlands, quality tea. Boh, Malaysia’s largest and most famous Tea manufacturer accounting for 75% of the tea consumed in the country has had its home here in the Highlands since the 1930’s. 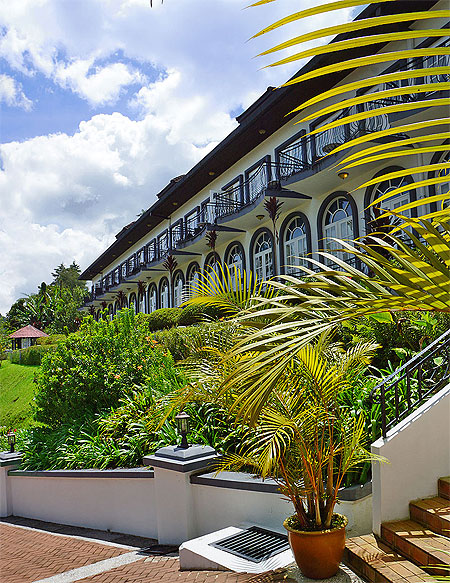 Originally founded by 1929 by J.A Russell and still run by his descendants’ the Boh tea plantation produces a range of high quality tea leaves that is used by the Cameron Highlands Resorts for its guests and has subsequently produced a very special tie-up between the Hotel and Tea Plantation which we will touch upon a little later.

Our visit to the Cameron Highlands Resort.

The journey to the Cameron Highlands is both simple and stress-free being a few hours drive North of Kuala Lumpur and South of Penang. Major road improvements to the roads in the Highlands make the trip uneventful aside from visual stimulation from the incredible change of scenery as you get closer to the Highlands. The imposing hills, lush foliage and gravity defying farms and properties, will to many first time visitors be a unique experience to your eyes.

Along the way you’ll pass many roadside shops and stalls selling all types of locally grown produce, highlights include fresh honey and locally grown strawberries and hand made chocolate, a welcome break should you decide to stretch your legs during the journey.

Once you have passed through the town you’ll reach the resort and golf course on the other side, it’s hard to miss the Cameron Highlands Resort, a beautiful, gleaming Colonial styled mansion with uniformed arched windows and balconies, a ‘Maison Blanc’ on an elevated position with sculpted gardens. Upon driving up to the main entrance we were greeted by the General Manager, Mr Kirinjit Singh, a charming well dressed man who gave us a very warm welcome and asked the porters, dressed in their gleaming white tunics to unpack and park our car.

For fans of  period style property, the Cameron Highlands Resort is a true delight to look upon, wide, well proportioned, obviously Colonial in style and aesthetic in construction with rows of arched Georgian styled windows, casement doors and balconies. Accompanied by Sherry, the Guest Relations Manager and other members of his management team, Mr Singh walked us up through the main entrance into the ‘Reading Room’, a room that looked exactly like a lounge from a private members club, a place where lords, ladies and the gentry would have relaxed away from the common people chatting away over Pims, Fine Teas, Pipes and Cigars.

Photographs shown throughout the Cameron Highlands Resort feature were taken using the new Sony 24.3MP SLT-A77 – the World’s fastest* camera with record-breaking 12fps continuous shooting speed. You can read more about the Sony / Luxurious Magazine partnership on the About us page.
*Among interchangeable-lens cameras with an APS-C sensor as of August 2011.