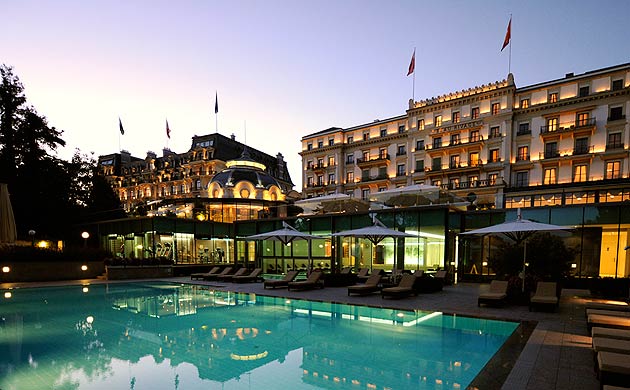 Enter the Beau-Rivage Palace and let it truly transport you to another world. Hailed as one of Switzerland’s finest hotels not least because of the amazing backdrop of the mountain, it’s been serving clients for nearly 150 years.

You often read of breathtaking panoramic views in brochures but looking outwards from this property, the view of the mountains really is jaw-dropingly amazing. I found myself pausing on several occasions to take in their beauty at every opportunity I could get.

Just as well, the Cinq Mondes spa offers the same dramatic views over Lake Geneva, where I was booked in to have a traditional oriental relaxing massage. The hotel takes its spa facilities very seriously and has spent some 12 million Swiss Francs on developing it. Cinq Mondes’ philosophy is to incorporate ancient health and beauty rituals as well as design elements sourced from Japan, India, North Africa, China and Bali.

The oriental head to toe massage begins with a generous splashing of oil, the fragrance of which you get to choose. I chose oil with rose and orange hints. It is then applied to the back using rhythmic massage movements before transcending on to each limb. You’re then turned on your front and the pampering continues on the front of your limbs before you get a good abdominal massage. I thought this would feel funny but actually it was really pleasant and my therapist told me it was good for aiding digestion. The best bit of the massage was left right until the end – the head. The same oil was drizzled onto the scalp and worked into it with the fingertips. I had been so relaxed throughout the treatment that I had been dosing in and out of sleep the entire time. But the head massage was what tipped me right into the land of nod.

Still wanting to lay horizontal, I continued my relaxation by the indoor pool taking sips of herbal tea which was available throughout the spa. There’s also an outdoor pool which is open in the summer, a Jacuzzi, steam room and sauna. For the exercise enthusiasts, there’s a fitness room complete with machines and free weights.

With food for the soul attended to at the Cinq Mondes spa, I was certain the gastronomy for the belly was going to be just as extravagant. With three restaurants to choose from it can be a hard choice to make. There’s the Café Beau Rivage which during the summer months opens its doors out onto the terrace overlooking the lake offering a brasserie style cuisine, the Miyako ehere guests can tuck into sushi and sashmi, and the Anne-Sophie Pic au Beau-Rivage Palace. The restaurant is led by Anne-Sophie Pic who is the only female French chef to gain three stars.

I chose to dine at the Café with offerings of contemporary dining in an equally modern setting. There’s plenty of choice with a selection of meats including lamb, venison, and steaks but I decided to opt for a simpler cuisine of tuna as a starter and chicken as the main. Or so I thought. The Caesar salad with grilled tuna with piquillos is far from simple in both its appearance and taste. The tuna was cooked to perfection and the small gems of lettuce still in the shape of their original buds, was the most crisp I had ever tasted. The roasted chicken was super moist with the flavour of thyme coming through just as it should. All the meals at Beau Rivage are paired with the right wines with many of them coming from the hotel’s own wine cellar which houses some of the best in the world. Pre or post dinner drinks can be had at the palace’s vintage-inspired bar which blends old with new for a truly decadent experience.

Both dramatic and subtle, the traditional wood panelling, rare under lit onyx bar top and muted earth grey tones, define the design’s aesthetics. Choose to sip a tradition cocktail or purchase a bottle of your favourite spirit, to be stored in a crystal decanter at the Bar, to impress friends when ordering even more cocktails.

Lisbon is Primed and Ready to Thrill British Tourists in 2021