Christie’s is proud to announce the sale of Comte and Comtesse Niel, a shared passion which will take place in Paris on 16 April 2012. Featuring nearly 130 lots the collection includes furniture, silver, arms, prints, books, old master paintings and sculpture. The collection is a testimony to the Comte and Comtesse Niel as passionate collectors of French art with royal provenance from the second half of the 18th century and is expected to realise between €1 million and €1.5 million. 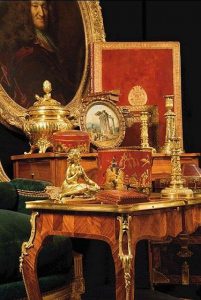 The Comtesse Niel, born Victoire Gasquet James, was one of the four heirs of both her mother Elizabeth Bleeker Tibbits Pratt’s immense New York Pratt banking fortune and her father Amedee de Gasquet James’ equally large New Orleans fortune.  During her childhood, the Comtesse, her parents and siblings led a Henry Jamesian existence moving from grand house to grand house in France and America.  However, in 1911, after the Comtesse’s father died, her mother married the Grand Duke of Mecklenburgh-Schwerin, Raymond Abel de Libran.

In 1921 the Cometesse married the Comte de Niel and settled into married life at No. 44 Avenue Gabriel.  In the early fifties they began to collect and study books, pictures, souvenirs, bibelots and furniture that had once been owned by the French royal family in the latter half of the l8th century. Examples of this furniture will be offered at auction including a Louis XVI royal “Bergère”, estimated to fetch between €80,000 and €120,000. Created during the third quarter of the XVIIIth century, this chair was brought to Elizabeth’s castle in Compiègne. Also on offer is a Louis XV writing case made during the middle of the XVIIIth century (estimate: €40,000-60,000). These rare and precious survivals of the revolution and republic were discovered with the help of the leading antique dealers of the post-war era such as Cailleux, Fabius and Wildenstein. The objects were obtained from other collectors, as well as from the descendants of aristocratic families, and discovered in the sale rooms of the time.

From l954, the couple began to give generously to the royal palace of Versailles; they were celebrated for refusing to lend any part of their collection preferring to donate royal pictures, furniture and works of art outright.  Treasures made for and belonging to Madame du Barry, Marie Antoinette and Louis XV which had disappeared during the Revolution now found their way back to the palace for which they had been originally destined.  Over the years the Comte and Comtesse became by far the most important patrons of Versailles and other public collections in France.

After the Comtesse’s death in l962, the Comte continued to bequeath important pieces until his death in 1966.  He donated Portrait of Baron de Breteuil by Mosnier to the Louvre in 1963, as well as a bird cage once owned by Madame du Barry and a table delivered by Domanock for Marie-Antoinette to Versailles in 1966.

This unique collection of fine and decorative arts with royal provenance was created in an era of unequalled connoisseurship in France and in America and which also saw the forging of both the Frick and the Wallace Collections.