Conrad Macao has opened its doors to welcome the public as part of the elegant and exciting opening of Sands Cotai Central.

“We are extremely proud of this significant milestone both for Conrad and for Macao,” said John T.A. Vanderslice, Global Head of Luxury & Lifestyle Brands for Hilton Worldwide. “Conrad’s entry into the Macao market sets a new benchmark for luxury accommodation on the Cotai Strip.” General Manager Troy Hickox added, “Sophisticated global business and leisure travellers to the city now have a hotel where they can enjoy the ultimate luxury of being themselves in a world of style, service, and connection.”

The Conrad Club Lounge, one of the hotel’s three-bay suites and the restaurant Do Mar played host to some of Asia’s most well-known actors, musicians and models in the afternoon, as media representatives were taken on a celebrity mystery tour. The starstudded line-up of surprise interviewees included Kuraki Mai, Park Min Young, Vivian Xu, Rene Liu, Richie Jen, Jaycee Chan, Kenny Bee, Annie Wu and Hey Girl. 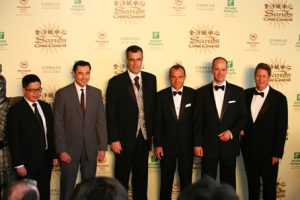 The highlight of the day was the 5pm opening celebration. The China National Symphony Orchestra Choir gave a stirring performance, followed by a lion dance featuring a colourful purple lion representing the Conrad brand. After a coin ceremony, sky walkers 500 feet overhead began carefully traversing the 1,700-foot distance between The Venetian Macao and the top of the Conrad Macao tower at Sands Cotai Central, while balancing on a wire less than one-inch thick. Vanderslice participated in the culminating moment of the ceremony, along with other key executives and dignitaries, bringing together a large golden traditional Chinese knot, which then ascended to hang above the crowd in attendance, symbolising the union of both sides of the Cotai Strip.

Thousands of members of the public, who had been queuing outside during the ceremony, were given their first look inside the one-of-a-kind Conrad Macao when doors opened at 6pm.

In addition to the uniquely-designed lobby, which features a Himalayan theme, Conrad Macao offers guests a host of services and amenities in a contemporary luxury environment. Each of the 430 exquisite rooms and 206 magnificent suites provides luxurious comfort, along with the latest technology, in a spacious environment. The Conrad Club Lounge is Macao’s largest and most elaborate, and features a magnificent view of the Cotai Strip. Guests have an exquisite variety of dining options at hand, including Dynasty 8, Conrad’s signature restaurant, headed by the esteemed and experienced Chef Wong Man. Conrad’s world-class meeting facilities are impressive, with three junior ballrooms in house providing 16,000 square feet of flexible meeting space. Conrad Macao specialises in bespoke wedding experiences, and also has comprehensive athletic and wellness facilities, including heated pools, a state-of-the-art fitness centre by Technogym and the luxurious Bodhi Spa.

Conrad Macao further provides guests with easy access to an extensive variety of dining, retail, entertainment, gaming and MICE offerings, as part of a fully integrated resort city at the heart of the Cotai Strip.

Conrad Macao, Cotai Central is just minutes from all of Macao’s major points of entry. It offers convenient access to all parts of the territory, including UNESCO heritage sites, with limousine service, plus the added convenience of complimentary shuttle buses.