As the countdown begins for the seventh edition of World Ducati Week 2012, online ticket sales have started ready for thousands of Ducatisti to descend on the Misano World Circuit on the Riviera Romagnola 21- 24 June for the year’s most eagerly-awaited Ducati event.

With motorcyclists all over the world making travel plans for World Ducati Week 2012, this year entitled: The Planet of the Champions, the dedicated event website at wdw.ducati.com is so busy with ticket orders that the record 60,000 visitors from 2010 looks set to be broken in 2012. 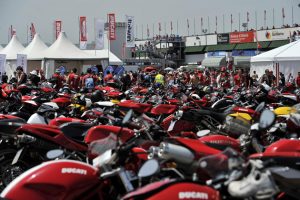 Tickets are available in “one-day” or “four-day” format and further divided by “motorcyclist pass” for rider and bike or “passenger pass” for person without bike or arriving as a passenger. The Ducati Factory is also busy preparing to welcome the thousands of people who will visit their famous Borgo Panigale home in Bologna around the World Ducati Week 2012 event, with doors open to visitors from 19 – 25 June for both Factory and Museum tours. Factory tours will be available from 9.30-16.00 each day and the Museum will be open from 09:30-17.30. No prior-booking is required and World Ducati Week 2012 ticket-holders will also benefit from a special discount.

As usual, Ducati have planned a packed program of activities and entertainment, including a Saturday night event in Riccione with Team Ducati MotoGP riders, Valentino Rossi and Nicky Hayden. Triple World Superbike Champion,Troy Bayliss will also be in attendance, holding a round of his Troy Bayliss Academy on the track on Thursday as part of a special Ducati Riding Experience in addition to attending many other WDW2012 activities. Current Ducati-powered Superbike riders will also include Althea Racing Team’s reigning World Champion, Carlos Checa.

As well as the traditional track sessions, appropriately qualified enthusiasts will also have the opportunity to pre-book an exclusive test ride aboard the latest Ducati 1199 Panigale, while for racing Ducatisti, World Ducati Week 2012 will also host a round of the Ducati Desmo Challenge.

In true Ducati community spirit, World Ducati Week 2012 welcomes non-Ducati riders to experience the unique event with attractions such as the Ducati University, in which participants can engage with Ducati Technicians, Test Riders and Engineers. Additionally, Ducati present the custom bike Ducati Garage Contest, the Historic Bike area, Pitlane Walks with the GP and SBK riders available and the highly popular “Bike Wash”! In organising the biggest WDW event ever, Ducati has further strengthened its associations with partners, institutions and authorities whose valuable support will help to achieve a spectacular and successful event. This year’s special recognition includes the Misano, Cattolica and Riccione Town Councils and the Republic of San Marino, whose collective three evenings of incredible open-air World Ducati Week 2012 festivals will be hosted in some of the most beautiful towns of Rimini’s Riviera Romagnola.

The party atmosphere starts on Thursday, 21 June with a Beach Party at Misano exclusively for WDW participants. The long-awaited arrival on The Planet of the Champions will be celebrated with music, fireworks and more, while the evening event of Friday, 22 June will see the town of Cattolica painted red with Ducati passion. Saturday evening’s perfect destination for great nightlife is the seafront at Riccione, which will host an evening of entertainment with special guests Valentino Rossi and Nicky Hayden.

Vital to the success of such a mega-event are important partnerships such as Mercedes-AMG, with whom Ducati established strong ties during WDW2010 as event sponsor. It was from that event that the two brands entered a number of co-branded initiatives, from visibility in official Ducati Team in MotoGP and becoming the Official Car Partner of the Ducati Team to the production of the exclusive Diavel-AMG Special Edition.

Effenbert Beer (also available in non-alcoholic) take on a supporting role as event-partner. As the “title sponsor” of World Superbike’s Team Effenbert Liberty Racing, they will attend with their Ducati-powered official riders of Jakub Smrz, Sylvain Guintoli and Maxime Berger, as well as Superstock duo, Federico Sandi and Brett McCormick.

Entering World Ducati Week 2012 as event-partners are Tudor, the high-end Swiss sports watch maker, who already collaborate closely with Ducati as Official Timing Partners and with the creation of the Fastrider series of watches that combine Tudor’s cutting-edge technical characteristics with unique Ducati features.