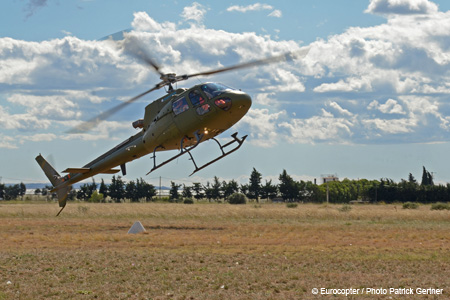 Eurocopter has successfully tested a hybrid helicopter that combines a turboshaft internal combustion engine with an electric motor for a world premiere, marking a new milestone in its innovation roadmap that opens the way for further enhancements in rotary-wing aircraft safety.

For this initial breakthrough in exploring the hybrid concept, Eurocopter is using the supplemental electric system to increase maneuverability of a single-engine helicopter during an autorotation landing – which is performed by helicopters in the event of a main engine failure.

The demonstrator helicopter is a production version of Eurocopter’s highly successful light single-engine AS350, which has been equipped with a supplementary electric motor. In the event of an engine failure, the electric motor provides power to the rotor, allowing a pilot to control the helicopter very easily during the descent to a safe touchdown. The next step is to bring this concept to maturity and evaluate its implementation on Eurocopter’s series production helicopters.

“Eurocopter’s research and development efforts are used every day to push the frontiers by increasing helicopter safety and performance for the benefit of our customers, and we are proud to have brought the first helicopter equipped with an internal combustion engine and electric propulsion system to flight,” said Lutz Bertling, Eurocopter President and CEO. “Hybrid propulsion is an important element of Eurocopter’s innovation roadmap in developing the next generation of helicopters. It offers new opportunities for improvements in safety, along with the potential for reducing fuel consumption and emissions.”

The AS350 hybrid demonstrator has its highly compact electric motor and lithium ion polymer battery installed in the center area of the helicopter. Electronic controls enable precise deployment of power delivered by the electric motor during the period of autorotation.

Eurocopter’s AS350 is one of the most successful helicopters, with the more than 4,000 aircraft in service worldwide having logged more than a million flight hours as of 2010. It excels in hot conditions and very high altitudes, holding the record as the only helicopter to have landed on top of Mount Everest.