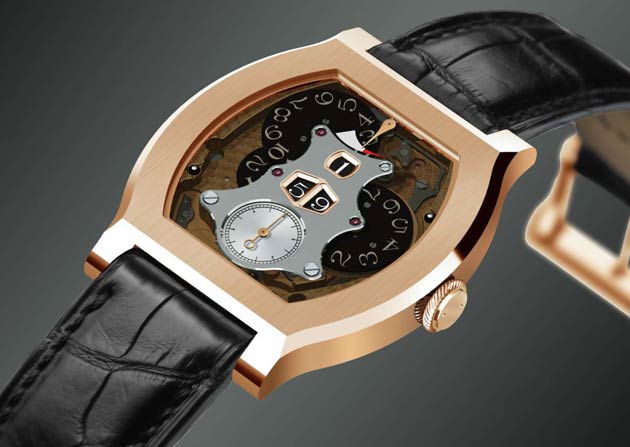 In the world of horology there seems to be an endless amount of watches to choose from.

I would envisage that the diverse range of timepieces currently available on the market would overwhelm a serious collector. Watchmakers are coming up with radical designs and using cutting edge materials. Essentially this makes my job as a watch writer a lot more interesting. 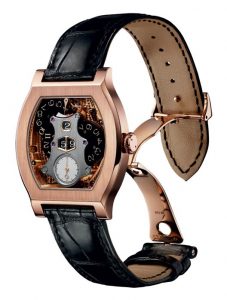 F.P Journe is a high-end watchmaking company established by François-Paul Journe in Geneva, Switzerland. Since his graduation in 1976 from the prestigious Ecole d’horlogerie de Paris, he has gained experience in the industry for nearly thirty years. Amongst his many achievements are the many awards he has been bestowed upon, including the Balancier d’Or prize and the Grand Prix d’Horlogerie de Geneve (for his Octa Calendrier model). Ultimately this has gained him respect and admiration from his many contemporaries.  All of his timepieces are really attractive but my personal favourite is his magnificent Vagabondage II.

The Vagabondage II is part of the F.P Journe Limited Edition range of watches. With dimensions measuring 45mm x 37.5mm x 8mm the watch should attract serious collectors. In my opinion the proportions of this timepiece suit the general aesthetic of the timepiece. I also feel a watch of this size will sit comfortably on the wrist. Primarily this is down to the elegant tonneau shape case and choice of materials used in production. The watch is available in 18 karat rose gold (68 pieces) and platinum PT 950 (69 pieces). Personally I prefer the platinum version because it showcases the overall design more effectively. Realistically I suspect a watch of this caliber would only be worn for special occasions and not for daily usage. 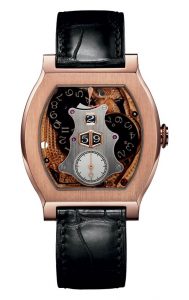 Visually the Vagabondage II has a unique and sophisticated appearance. The skeleton façade is captivating and perfectly exposes the brilliant mechanics of the bespoke movement. I love the way that the hours and minutes are displayed in a digital format (via rotating discs) rather than by the conventional hands. Admittedly this type of dial won’t appeal to everyone’s tastes especially classic watch lovers. Nevertheless there is no disputing this is a beautifully presented timepiece. Other attractive details include a polished central base plate, small seconds counter (at 6 o’clock) and retrograde power reserve (at 12 o’clock).

To power the watch François-Paul Journe has devised a highly complicated manual winding movement. The Calibre 1509 comprises 31-jewels and oscillates at a frequency of 21,600 vibrations per hour. Each of the 234 components has been hand finished and decorated to the highest possible level. This incredible mechanism also has a patented 1-minute constant force device. Functionally the Vagabondage II features hours, minutes, small seconds and a power reserve indicator (approximately 28 hours).

You can read more reviews by Steve Huyton on his own website www.totalreviews.com

See more of the Vagabondage II by clicking on an image below: