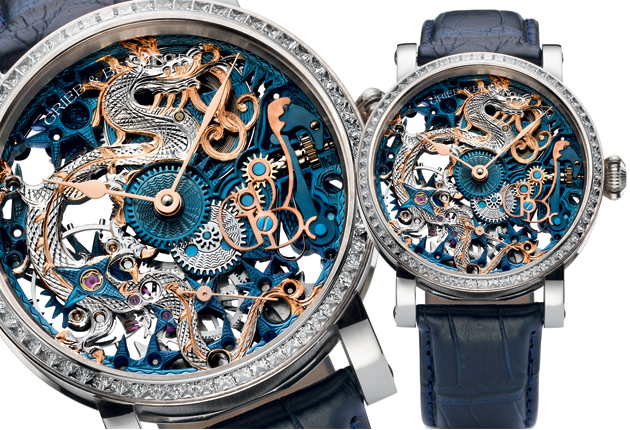 The number 8 is extremely lucky for many people around the world, particularly for those of Chinese origin. So it seems fitting that the latest creation from German watchmakers Grieb and Benzinger was handed over to a passionate Chinese watch collector on August 8th 2014 (8-8-2014).

When you want something spectacular and bespoke, you can’t rush things and Grieb & Benzinger Blue Dragon Imperial had this very eager Chinese customer waiting for eight months before receiving the finished masterpiece, once again the number 8 was a factor in the manufacturing process so it was probably a hidden blessing in disguise! Aside from the intricate hand-guilloché on the movement, the most striking aspect has to be the dragon incorporated into the intricate movement. The dragon has always been the symbol of imperial power – a symbol for happiness, peace, protection and destiny. And since 8 is the Chinese lucky number, this dragon project was blessed with triple luck.

The Blue Dragon Imperial includes a number of personal meanings for its new owner and was constructed (as with all Grieb & Benzinger timepieces) using the very best materials. The contrast between the blue, white and gold works very well, and it’s one of those timepieces that will garner admiring glances and curiosity, very handy especially if there is a story and meaning behind the watch.

This bespoke piece of horological art alludes to and combines Chinese mythology with the craftsmanship of Grieb & Benzinger, for which the German workshop is famed. This watch impresses by its amazing dragon which is fully skeletonized out of the movement itself and majestically floats within the case. Historical handicrafts and fine skills are exhibited by Grieb & Benzinger within this Blue Dragon Imperial watch: hand-skeletonization, hand-guilloché, hand-engraving and of course fine watchmaking.

The blue platinum coated movement is tribute to very rare historical Swiss watch making roots: Blue movements have mainly been built for the Chinese market in imperial China of the Qing Dynasty under Emperors Jia Qing and Dao Guang. Grieb & Benzinger is lucky enough to own one of these very rare original blue watch movements (made by Charles Oudin in about 1820) – the historical roots comes full circle.

The bespoke Blue Dragon Imperial comes in a solid 18K palladium-white gold case and a bezel set 66 finest Princess cut diamonds. The price tag hit the US $ six digit region, but this is not a big surprise as it’s a bespoke handmade timepiece.