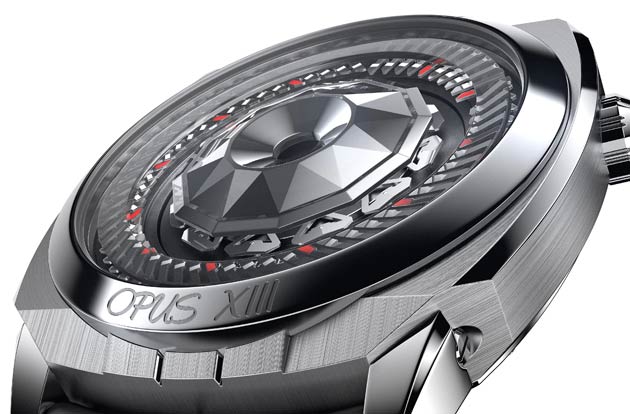 The marvellous designers art Harry Winston have done it again, creating something both unique and beautiful with the Opus XIII wristwatch.

So what make this a special timepiece? Well, there are only a few ways that you can measure time using a mechanical movement, but when it comes to showing it, the floodgates open and the world is your oyster. Harry Winston have used both originality sprinkled with a liberal dose of inventiveness with the Opus XIII.

Contrary to the usual staid styling seen on many of today’s watches, Harry Winston have used 59 pivoting minute hands in the Opus XIII, 11 triangles that rotate denoting the hours and a sliding trapdoor where minutes and hours appear and vanish before your eyes (see video below). Minutes accumulate around a track, each five minutes in red, withdrawing in unison when they complete the circle of the hour. Silver triangles spring in turn from a faceted dome to show the hours, rotating back when their duty’s done. Every twelve hours, Harry Winston’s logo is revealed on the dial, only to vanish sixty minutes later. 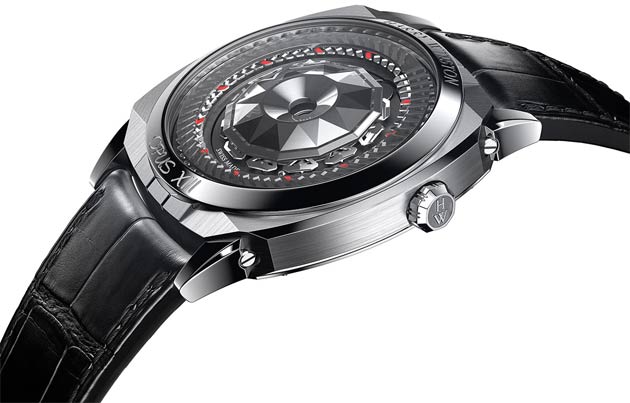 The 59 minutes hands pivot upon a ring of equally numbered steel shafts, held between ruby bearings and bring the total number of functional jewels to a record-setting 242. The bearings had to be set and adjusted with the utmost precision, a task requiring a huge amount of patience, skill and experience. The ruby ball-bearings used in the construction of the sliding shutter were so small that the package could only be opened in a non-static environment or they would fly off.

With all of this technology, you would perhaps imagine that the Opus XIII would be massive, the great news is that its not. Its stylish, unique and discrete with the inner working cossetted under a faceted dome. Peering beneath the smoked sapphire crystal, you’ll see something that looks similar to the fan of a jet engine. This is an extraordinary component, comprising fifty-nine jumper springs — one for each minutes hand — carved from a single piece of steel using LIGA technology (lithography, electroplating and molding). The blades had to be adjusted with a file in numerous prototypes until the component could be manufactured with the exactly right tension in each spring. 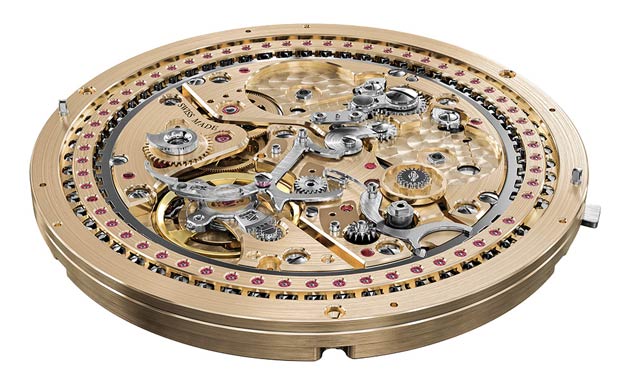 How does the Opus XIII Work?

The Harry Winston Opus XIII shares very little with any other watch on the market aside from its balance and escapement; the rest of the mechanism is pure innovation and invention, courtesy of independent watchmaker Ludovic Ballouard.

The display is essentially two separate power sources working as a team. The first, a mainspring barrel drives the escapement through the going train and keeps the balance swinging at a steady 21’600 vibrations an hour. The other barrel provides the energy for the display of minutes, triggered every 60 seconds by the center wheel of the going train.

Perhaps the key element is the outer minutes ring driven by the second barrel. Every minute, it jumps forward a step, releasing then locking by a rocking lever with two pallet stones, controlled by a cam working off the center wheel. A peg on the advancing ring flips each minutes hand forty degrees in turn, revealing them in succession around the dial. At the end of the 59th minute, a second outer ring comes into play, its crenelated rim simultaneously rotating the fifty-nine minutes hands back into their hiding places. The mechanism for the hours is no less ingenious. Here again it relies on an outer ring that jumps forward every sixty minutes, turning the triangle of the old hour 180° so that it disappears beneath the faceted dome on the dial, and simultaneously turning up the next hour. At the heart of this mechanism is a snail cam that rotates once an hour. A lever drops off the edge of the cam, pulling a rack to turn a pinion that advances the hours ring. At the 12th hour, instead of turning up a triangular hour hand, the hours ring rotates a wheel attached to a connecting rod that pulls open a sliding shutter to reveal the Harry Winston logo in the centre of the faceted dome.

The Harry Winston Opus XIII, reinvents time, and again illustrates the creative explosion triggered between the designers, master watchmakers and its partners in the Opus Series. The company believes nothing in watchmaking is beyond human ingenuity, and Opus XIII invariably proves it right.