Benefiting from the experience of his father, who despite his health worked alongside his son for 13 more years, Emile achieved remarkable success, building the business into the largest and most prosperous in Villeret. Not only did he introduce the lever escapement – the design used today in almost all mechanical Swiss watches – and stake out a speciality in women’s watches which was to 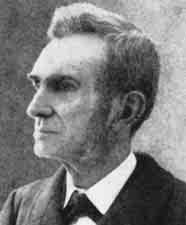 distinguish Blancpain for more than a century, Emile made enormous strides in the production methods. He increased output from the workshops fully tenfold by development of a modern assembly line, which divided tasks of the watchmakers into particular elements of the watches. There is somewhat of an irony in this advance by Emile, since 150 years later, the modern Blancpain retreated to= the traditions of the past well pre-dating Emile and distinguished itself from the rest of the industry in its rejection of production line methods, favouring instead hand assembly of watches from beginning to end by a single watchmaker, or as modern Blancpain terms it “an individual watchmaker working on a watch from A to Z”.

Not only was Emile prolific as a watchmaker, he was prolific as a father. His five sons and three daughters all followed in his footsteps as horologers. Upon his untimely death in 1857 at the age of 46, three of his sons, Jules-Emile, Nestor and Paul-Alcide, took the reins of the Blancpain enterprise. Later, in 1865, Jules-Emile and Paul-Alcide, fully preserving the business, reincorporated together. They were to preside over a period of enormous technical change and competitive pressure. On the technical side, winding by means of a key fell to the wayside, replaced by the more modern method of keyless works enabling both winding and time setting by means of the crown. But it was the brutality of the business environment that raised the sternest challenges. In 1860 the average price of a silver men’s watch with a cylinder escapement was 50 francs; in the ensuing 40 years that price was to fall by a factor of 5 to but 10 francs. Even though it is certain that this observation will elicit no sympathy whatsoever from anyone remotely connected with today’s electronics industry where prices for storage or computing power may fall a hundred fold in but five years, this price collapse took its toll on Villeret’s watch industry. Of the 20 companies which existed when Jules-Emile and Paul-Alcide Blancpain took over the business, only three others apart from Blancpain were to survive through to the very early 1900s.

Blancpain’s formula for prospering during this washout of the industry was Jules-Emile’s decision to specialise in high end watches featuring lever escapements. Following the departure of his brother Paul-Alcide, who left to pursue a career of all things brewing beer in Fribourg, Jules-Emile, now joined by his son, Frédéric-Emile (not to be confused by his grandfather who bore the same name), continued the pursuit of modernity. Directly in front of the original Jehan-Jacques farmhouse, Blancpain constructed a new two storey factory which for the first time employed water power from the bordering Suze river to generate electricity.

Frédéric-Emile Blancpain’s career was to endure until 1932. For his later years, he was joined in 1915 by Betty Fiechter who assisted in running the business. Over the period 1915-1928, Frédéric-Emile trained Betty, allowing her to become the director of the factory overseeing all of the production for Blancpain. Revealing of his embrace of technology and his progressive approach to management, was Frédéric-Emile’s use of the then remarkable invention, the Dictaphone. Preferring to spend his time in Lausanne rather than Villeret, he was given to dictating his thoughts onto the wax rolls of the machine and, depositing the rolls in the mail, trusting his orders would be carried out. Had he lived 70 years later, it is clear that Frédéric-Emile would have been in the forefront as a Blackberry addict (now affectionately known as “Crackberry”). Relying on the stream of wax rolls running between Lausanne and Villeret and reposing full confidence in Betty Fiechter’s talents as a manager, Frédéric-Emile devoted himself to both expansion of Blancpain’s markets and the design of record-breaking movements. For the first time, Blancpain looked across the Atlantic, sending its marketing director, André Léal, over to the United States. On the movement side, Frédéric-Emile was particularly fascinated by the challenges of automatic winding. In the mid-1920s he made the acquaintance of a British watchmaker, John Harwood who had been working on bringing an automatic winding system, then solely existing in pocket watches, into the world of wristwatches. Working together and utilising as a starting point one of Blancpain’s base calibres, Harwood and Blancpain succeeded in 1926 in producing the world’s first automatic winding wristwatch. 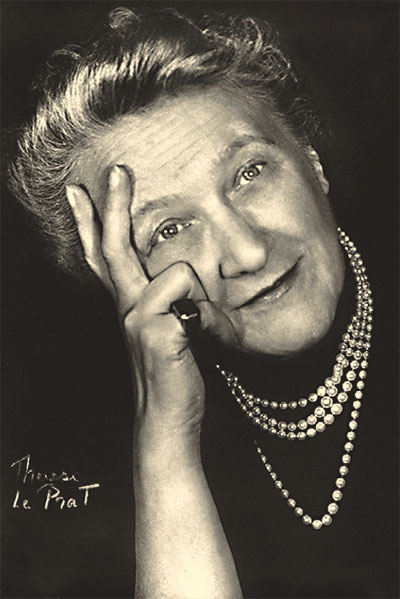 Amazing for its time, the Blancpain Harwood watch placed a thick winding rotor off the end of the movement, allowing it to move back and forth in its channel over a 180 degree arc. Although the achievement of the world’s first automatic winding system for a wristwatch propelled the watch to the starring position at that year’s Basel fair, the innovations did not stop there. To fight dust, a brutal wristwatch enemy before modern seals were developed, the crown was removed and the watch featured a system for setting the time by rotating the bezel. Frédéric-Emile’s second foray into automatic winding came a few years later in 1930 with the introduction of the Rolls women’s watch. Again working in collaboration with outsiders, Blancpain perfected a scheme for automatically winding ladies watches which were far too diminutive to accommodate a rotor. Here the ingenious solution was to place the entire movement into a carriage that would allow it to slide back and forth, thereby recharging the mainspring. To facilitate the sliding, the watch was fitted with ball bearings between the movement and its carriage. Again a world first was won as the Rolls, a name invented by Blancpain for selling the watch, earned its place as the first automatic winding wristwatch for women. Frédéric-Emile’s string of successes came to a tragic close with his sudden death in 1932. Lost at the same time was the Blancpain family name, as he left no male heirs. There were however capable hands to take over the Blancpain enterprise, those of Betty Fiechter, who, together with the Blancpain sales director André Leal, purchased the business in June 1933, renaming it Rayville-Blancpain, Rayville being a phonetic anagram of Villeret. Owing to an oddity of Swiss law, this name change was not optional. With no member of the Blancpain family remaining associated with the business, the new owners were required to alter the official business name (the gymnastics provoked by this regulation have, over time, led to bizarre solutions with one famous Geneva watch company searching for and hiring a person “with the right last name” in order to continue their hyphenated trademark).

There is a touching letter marking the transfer of Blancpain after 200 years within the founding family to Betty Fiechter. Frédéric-Emile’s daughter, Nellie wrote to Betty: “The end of Villeret for Papa brings real sadness, but I can assure you that the only solution which can truly ease my sadness is your taking over of the manufacture together with Mr. Leal. Thanks to this fortunate solution I can see that the traditions of our precious past will be followed and respected in every way. You were for Papa a rare and dear collaborator. One more time let me thank you for your great and lasting tenderness which I embrace and carry with me in my heart.” The early days were not easy for Betty Fiechter. The Great Depression walloped the entirety of the Swiss watch industry, causing widespread business failures and producing massive unemployment. Blancpain’s solution was to seek refuge in the American market, which by the mid-30s was in sounder condition than prevailed in Europe. The opening which Fiechter found was as a movement supplier. Over time, Blancpain became a principal supplier of Gruen, Elgin and Hamilton. A further blow came with the disappearance of Fiechter’s co-owner, André Léal, on the eve of WWII.

Despite these challenges, Betty Fiechter succeeded enormously. Joined in 1950 by her nephew Jean-Jacques Fiechter the Blancpain business became a powerhouse, both in respect of watches sold under the Blancpain name and as a movement manufacturer. Their string of triumphs included the Fifty Fathoms, the world’s first modern diving watch which debuted in 1953 (see Issue 3 of “Lettres” for the comprehensive history of how Jean-Jacques Fiechter developed this iconic watch in collaboration with the French combat divers and presided over not only its widespread adoption by navies around the world, but its use by Jacques Cousteau and his team) and the Ladybird women’s watch appearing in 1956 and featuring what was then the world’s smallest round movement. On the back of these milestones, the Fiechters guided Blancpain to a production level of over 100,000 watches per year by 1959. 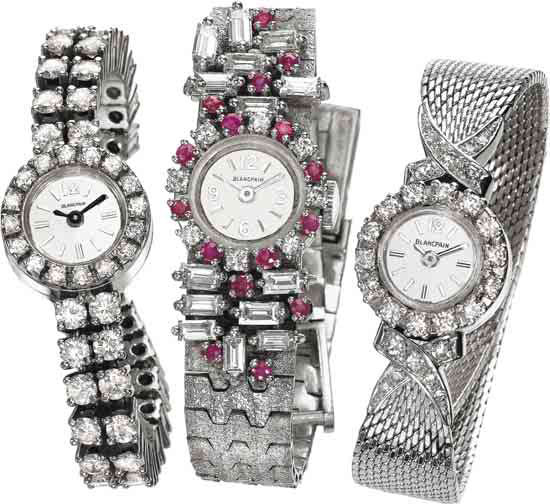 As Rayville-Blancpain grew it became increasingly apparent that the Fiechters needed additional resources to expand production to the level of demand. Betty Fiechter found the solution in 1961 via a merger into Société Suisse pour l’Industrie Horlogère (SSIH). Joined into SSIH were Rayville-Blancpain, Omega, Tissot and Lemania. Rayville-Blancpain became one of the production bulwarks of the group, building new facilities and soaring its production to over 220,000 pieces by 1971. The Fiechter legacy fell solely into Jean-Jacques’ hands following Betty’s death in 1971. Jean-Jacques would soon be sorely tested by what some in the industry called the perfect storm of the mid-70s which brought together the introduction of competition by quartz watches, the melting of the dollar against the Swiss franc (sending the prices of Swiss watches in the most important market to unprecedented levels), the oil crisis and a global recession. In combination these market forces plunged the production of SSIH in 1979 to less than half of what it had been before, generating huge losses and precipitating a crisis with their banks.

SSIH’s response to this pressure saw both arrivals and departures in the early 80s. Arriving in 1980 was the engineer Nicolas Hayek who later came to found the Swatch Group under whose ownership Blancpain now flourishes. Desperate to generate cash in all ways, SSIH turned to selling its patrimony. First on the block was the movement manufacturer Lemania (today Lemania, now merged into Breguet, is part of the Swatch Group aside Blancpain). Next was the name Blancpain which was sold to a partnership of movement manufacturer Frédéric Piguet, led by Jacques Piguet, and Jean-Claude Biver, then an employee of SSIH. Only the name Blancpain was sold by SSIH; the assets of Rayville-Blancpain, that is to say its movement manufacturing facilities and equipment, remained fully in operation continuously through the time of the sale. Together Jean-Claude Biver and Jacques Piguet opened a new chapter in the two and a half centuries’ old history of Blancpain. They transformed Blancpain from a company that had hidden much of its savoir faire by emphasising the production of high quality movements which would be sold under the names of others and letting sales of watches under its own name dwindle to but a few thousand pieces a year, to one which would keep its creations and inventions for itself.