With a limited special edition for the Laureus Sport for Good Foundation, IWC Schaffhausen is showing its support for the sixth time to children and adolescents who are confronted with the most trying conditions in the course of their everyday lives. The watch manufacturer is launching the Portofino Chronograph in characteristic Laureus blue as a symbol of hope for a better future.

“As a Global Partner of the Laureus Sport for Good Foundation, IWC Schaffhausen is launching another watch with a mission that goes well beyond keeping the exact time,” says CEO Georges Kern. “The Portofino Chronograph Edition Laureus Sport for Good Foundation is an ambassador for children and young people from all over the world who lead lives that are far from blessed and are in urgent need of our support. We are able – and willing – to lend a helping hand.”

Since 2005, the Schaffhausen based company has been a driving force behind Laureus, which supports over 90 projects worldwide that give socially underprivileged children and adolescents the hope of a better life and show them ways of helping themselves. Every year, in keeping with a revered tradition, IWC Schaffhausen selects a model from its collection as a means of supporting the Laureus Sport for Good Foundation. In 2012, it is the Portofino Chronograph’s turn to sustain this sport-inspired range of watches.

The watch that gives fresh heart 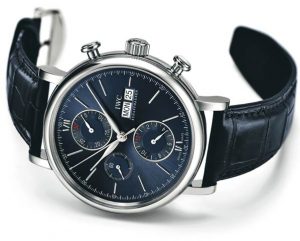 The Portofino Chronograph Edition Laureus Sport for Good Foundation in stainless steel is available in a limited edition of 2,500 watches. The exclusive timepiece in the hallmark shade of blue combines understated elegance with a distinctive sporting flair and is a perfect example of successful design and modern technology. The stopwatch elements have been so skilfully integrated that the simplicity typical of the Portofino is retained. The chronograph dial, too, is equally restrained without sacrificing any of its functionality. The aggregate timing displays are joined by a small seconds at “9 o’clock”, which elegantly counterbalances the day and date displays on the opposite side of the dial.

The Portofino Chronograph Edition Laureus Sport for Good Foundation is powered by the tried-and-tested 79320 calibre with a 44-hour power reserve and automatic winding with a ballbearing rotor. A special engraving embellishes the back of the case. This year, in keeping with tradition, IWC Schaffhausen organized its annual children’s drawing competition among all the Laureus Sport for Good Foundation projects worldwide. The subject “Time to inspire” motivated children and young people all over the world, aged between 4 and 16, to take part. The jury finally chose an illustration by 7-year-old Kumara Wadu Parami Apsara from Sri Lanka, who is part of the Seenigama Sport for Life project. The young girl, who was born exactly a month before the devastating tsunami, took inspiration from the subject to depict four young girls happily playing and enjoying themselves without a care in the world. The winning entry is engraved into the case back of the special edition and serves as a reminder that part of the proceeds from sales will help children all over the world come to terms with their difficulties and find renewed courage despite all the setbacks and losses they have suffered. 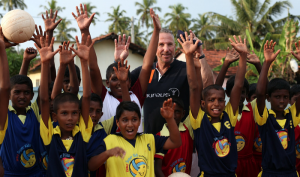 The last three decades in Sri Lanka have been marked by fear and suffering. A 30-year civil war that ended only in 2010 destroyed a large proportion of the island and violently ripped many communities apart. The effects of the horrendous tsunami that hit in December 2004 are still keenly felt, even 7 years later. In April 2005, 4 months after the catastrophe, representatives of the Laureus Sport for Good Foundation first paid a visit to the devastated southern province of Sri Lanka around Galle. Under the leadership of cricketing legend and Laureus World Sports Academy member Sir Ian Botham, the team looked into ways of using sport to give children and adolescents in the crisisstricken region something they could count on and use, to make a large contribution to rebuilding the country. Following its visit, the Laureus Sport for Good Foundation began cooperating with the locally active Foundation of Goodness and set up the Seenigama Sport for Life project as a means of actively supporting the region. While the first priority was to heal the mental wounds and rebuild the country and its infrastructure after the tsunami, the focus today is on a long-term commitment.

The Seenigama Sport for Life project offers coaching in cricket, volleyball, swimming, basketball and badminton from which more than 1,400 children and young people in eight village schools now benefit. Sport is also used as a means of tackling the many social problems, and this is having a positive effect on the entire region. The Foundation of Goodness has also extended its efforts to the north of the country. It is the only non-governmental organization involved and, together with the Laureus Sport for Good Foundation, is fostering post-war development in Sri Lanka. New sports facilities are being built in the former wartorn zone of Mankulum in the north of Sri Lanka.

In March 2011, Ian Botham paid a visit to the project region, which is still plagued by landmines. “Sri Lanka has had to face a number of challenges over the years including the tsunami and conflict, and I never cease to be inspired by the strength of the human spirit to deal with the challenges that affect communities,” said a visibly moved Ian Botham.

Sport will continue to play a key role in the attempt to have a positive influence on the lives of as many children and adolescents as possible in Sri Lanka and to pave the road to a better future. Further information can be found at: www.laureus.com/foundation/projects

Together against poverty
Seenigama Sport for Life is just one of over 90 worldwide projects supported by the Laureus Sport for Good Foundation. A charitable foundation, it has already assisted over 1.5 million children and adolescents who are victims of poverty, homelessness, war, violence, discrimination, drug addiction, racism and HIV/Aids. IWC Schaffhausen is a Global Partner and worldwide representative of the Laureus Sport for Good Foundation. With the support of the Laureus World Sports Academy, an association of sports legends who between them hold over 100 Olympic medals, 100 world championship titles and 200 world records, the aim is to help children and young people find a way out of drugs, poverty and violence. Following this principle, the Laureus Sport for Good Foundation is active in crisis areas all over the world, including the slums of Mumbai and Uganda, the South Bronx in New York and in the region torn by the Israeli–Palestinian conflict.

IWC Schaffhausen – Social Responsibility
With a clear focus on technology and development, the Swiss watch manufacturer IWC Schaffhausen has been producing watches of lasting value since 1868. The company has gained an international reputation based on a passion for innovative solutions and technical ingenuity. One of the world’s leading brands in the luxury watch segment, IWC crafts masterpieces of Haute Horlogerie at its finest, combining supreme precision with exclusive design. As part of the company’s social responsibility, IWC is one of the driving forces behind the Laureus Sport for Good Foundation. Active climate protection and environmental responsibility also are part and parcel of the company’s philosophy. The traditional Swiss manufacturer has lowered its carbon dioxide emissions by 90 per cent in the space of a few years and has been certified as a carbon-neutral enterprise since the summer of 2007.

Features
Mechanical chronograph movement, date and day display, small hacking seconds, case back engraving based on the winning entry to the “Time to inspire” drawing competition, limited to 2,500 watches in stainless steel 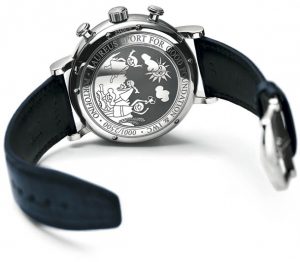