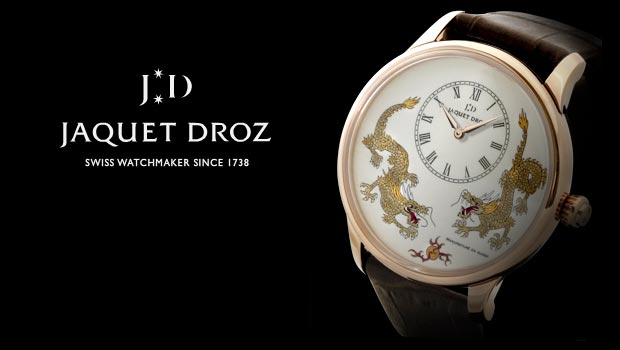 This is the story of an encounter between a country and a master watchmaker. Since they first met more than three centuries ago, Jaquet Droz and China have been steady companions. Today, the 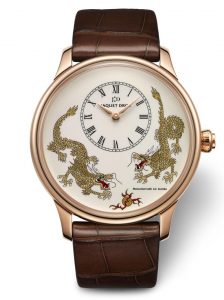 Manufacture is celebrating the Chinese New Year with the Petite Heure Minute Dragon, a precious timekeeper that sparkles with exceptional brilliance.

Long a creature of legend in Chinese civilisation, the Dragon has always fascinated men and women in power. The Imperial Dragon, with its pair of horns, ten claws and four teeth, is the most famous of them all. Concealed at the throat of this fantastic animal, which symbolises supreme spiritual authority, is a pearl of phenomenal power representing happiness as well as the wisdom of the Emperor and the righteousness of his decisions.

Pierre Jaquet Droz was undoubtedly familiar with the power and symbolism of the Imperial Dragon, for it was he who introduced the privileged denizens of the Forbidden City to the magic of Swiss clockmaking at the time of the Enlightenment. Three centuries later, the watchmaking company originally founded by this intrepid adventurer and man of vision is presenting the Petite Heure Minute Dragon in honour of the Chinese New Year and the Year of the Dragon.

Famed as an enamelling specialist and for the delicacy of its paintwork on enamel, Jaquet Droz has applied a new technique to one of its most iconic watch creations. The size of the off-centred subdial on the Petite Heure Minute Dragon Watch offers dialmakers a perfect canvas on which to express their art to the fullest. By adding infinitesimal flakes of gold to its pigments, Jaquet Droz has expanded the canon of beauty and presented its master painters with a daunting challenge: they must work for an entire week to give each piece spectacular radiance and unparalleled dimension.

Against an ivory background of Grand Feu enamel, two dragons fight over the pearl. Remarkable for its intensity, the dramatic scene occupies the blank space of the dial to great effect. The gleam of dragon scales enhances the brightness of the generously proportioned 43-mm Petite Heure Minute Dragon watchcase as well as the streamlined lancine hands, also made of gold. Subtle touches of red enhance the powerful imagery of the drawing. The classical elegance of the Roman numerals on the  Petite Heure Minute Dragon refers discreetly to the dialogue between the Orient and the West, not only situating this timepiece within the Jaquet Droz tradition of innovation and exploration, but also staying true to the craft and traditions of Jaquet Droz.

Mounted on a rolled-edge, hand-made brown alligator strap, the Petite Heure Minute Dragon is provided with a mechanical self-winding double-barrel movement powered by a weight of 22-carat white gold. Issued in a Limited Edition of only 88, each timekeeper features an engraved number, a power reserve of 68 hours and water resistance down to 30 metres. It is a work of art, conceived as an exceptional invitation to travel through time, space and one of the finest cultures in the world.