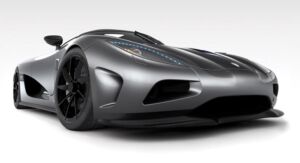 This year at the Geneva Motor show Koenigsegg is presenting the brand new Agera R – Quicker than lightning!
Equipped with special Michelin tires and a custom made Thule Roof Box – Speed Racer is ready to attack the ski resorts!
Last year Koenigsegg presented a pre-production version of the upcoming Koenigsegg Agera. Since then the pre-production car and several test mules have continued the Agera development program.
The Agera pre-production car has been driven by several influential motoring journals, resulting in raving reviews and awards, such as for example becoming the “Top Gear Hypercar of the Year”.
All in all the production versions of the Agera are created to take the Koenigsegg experience to the next level both on the road and the track, still maintaining the largest luggage space in the industry in combination with the unique Koenigsegg door
system and detachable/stow-able hardtop.
There are several differences between the pre-production car previously shown and the production versions. For example, the engine and gearbox configurations are different and some revolutionary interior, chassis and aerodynamic features adorn the production version of the Agera that has never been shown before.
Although sharing the same values and philosophies as previous Koenigsegg models, the Agera takes the Koenigsegg experience to a completely new level. Similar to all previous Koenigsegg hypercars, the new Agera is the brainchild of Christian von Koenigsegg. The Agera has come to life in order to set new benchmarks for Hypercars when it comes to control, handling, speed, comfort, practicality and sheer driving enjoyment, while combining these features with clean, efficient and beautiful design. The name Agera set the tone for the new project. Agera means “to take action” in Swedish. It is also short for the ancient Greek
word Ageratos which means ”ageless”. These two are very suitable meanings, for the car building the future of Koenigsegg.

THE DESIGN OF THE KOENIGSEGG AGERA
The Agera is designed with the minimalistic “less is more” philosophy in mind. This philosophy means that the shape of the car has to be purely functional with no added features except those purely needed to meet regulation, added safety, ergonomics, practicality and aerodynamics. We believe that if this philosophy is followed, the car will also be beautiful as it is purely purposeful. A good analogy is the evolution of a dolphin that has had to meet similar criteria in order to reach their present configuration through the evolution of nature.
The Agera is proportionate, compact and muscular. Its timeless, efficient and distinctive shape is truly a testament to time. The original shape and concept of the Koenigsegg CC, created 15 years ago, is still valid, fresh and highly competitive today. The Agera manage to stay true to the original philosophy.

THE AERODYNAMICS OF THE AGERA
The Aerodynamics of the Agera has been honed and perfected over many years in CFD and wind tunnel in order ensure best possible outcome. Even with the massive dynamic rear wing, the drag of the Agera is only Cd 0.33, in high speed mode and Cd 0.37 in track mode. Even though the Agera is a full 2 meters wide, it only has a frontal area of 1.87 m2. This results in a Cd*A value of only 0.62 and thus a theoretical top speed of around 440 km/h (Agera R), given the gear ratio and power available.
All Agera models are limited to 375 km/h in standard mode, but can be unlocked by Koenigsegg for shorter periods of time, if all necessary conditions are met, such as road condition, tire wear, service level of car etc. The car is set in full speed mode by unlocking the top speed mode in the Infotainment system.

THE INTERIOR
The interior of the Agera is like no other car. No other materials than those deemed worthy by Koenigsegg are allowed in the interior. This means that what you get to touch and see inside the Agera is only aluminium, carbon fibre, precious metals, alcantara and aniline leather. All switch gear is highly bespoke and features wonderfully unique solutions, as for example the Koenigsegg Ghost light, that make solid aluminium buttons gleam with LED powered symbols appearing out of nowhere.
A world first in the car industry. The illumination shines through the billet aluminium buttons and surfaces by way of almost invisible micro holes, creating excellent visibility of the symbols as well as a very clean and stylish appearance, framed by an all-new carbon fibre centre console and tunnel assembly.
The new super light full carbon airbag steering wheel incorporates many vital functions directly in front of the driver. Similarly to the CCX, the shifting paddles are mounted directly on the steering wheel to enable shifting without taking your hands off the steering wheel during hard cornering.
The central high-definition touch screen infotainment system controls the audio functions, satellite navigation, Bluetooth phone and secondary functions such as performance meters and car telemetrical data. The very comfortable and optionally heated carbon seats are great for long journeys but also give excellent lateral support
when needed. The Interior of the Agera is truly minimalistic and efficient in the purest Swedish sense. Nothing in the interior is there only to add visual drama; instead everything is there for a functional purpose. According to Koenigsegg, this is the essence of beauty, as it follows a less is more philosophy that embodies every engineering aspect of the Agera.

CI – Configurable Instruments
The CI is specifically developed for the Agera by Koenigsegg. It features a unique and configurable interface that can be adapted to driver specific demands. As it is connected to the cars CAN bus system it freely communicates with the infotainment screen and all other functions in the car. By pushing the left stalk button, different priority graphics can be chosen, depending on need. For example in track driving mode, there is a focus on; RPM, pressures, temperatures, lap times, and g-forces. Compared to GT mode, where: car speed, auto shift, satnav, power, music etc is prioritized.

Top Gear Mag by Bill Thomas:
It rides beautifully, almost softly, breathing deeply over harsh bumps, and longer undulations, and combining that with body control and cornering agility from the very top drawer. I couldn´t give higher praise. I absolutely love it. The most exiting supercar on earth, bar none.

Gulf News by Nick Hall. Agera Driven to the limit on the Dubai Autodrome:
I can feel the car tugging to the outside of the circuit, under steering ever so slightly on a constant throttle. Of course you can balance the rear slip angle with a delicate right foot or push straight through into lairy, sliding oversteer with a hefty application of throttle, with the traction control switched off. But then with a turbo-powered car it makes sense to make it nose heavy. The brakes, meanwhile, are pin-sharp ceramics mated to six piston callipers and the car’s stability under heavy deceleration is a testament to the engineering throughout. The Veyron and this are two of the only cars that brake in a perfectly straight line without a hand on the wheel. The Koenigsegg doesn’t only fit the roof in that front end, it can even take golf clubs, a feat not matched by the Bugatti Grand Sport. It wins the practicality war by a mile.