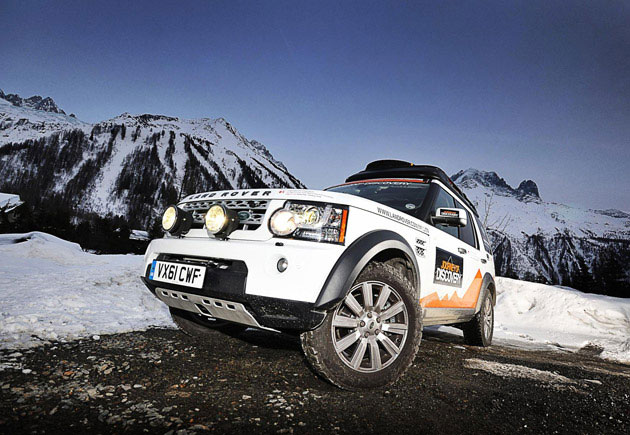 On the 50-day Journey of Discovery from Birmingham to Beijing, a team of four Land Rovers took on more than 8,000 miles of varied terrain through 13 different countries, revealing some unique and fascinating stories with the aim of raising £1m for the International Federation of Red Cross and Red Crescent Societies in the process… 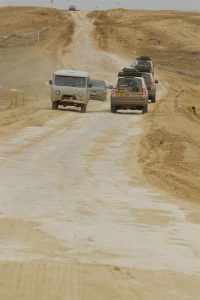 “Yeah, we’ve made it,” crackled a voice over the radio, speaking with relief after a nerve-wracking 72 hours of driving in one of the world’s most remote and rugged regions. For one of the most epic and ambitious modern-day overland journeys, this was a truly monumental moment.

The high-alpine pass into China had been blocked by snow for days, impassable even to the hardiest of off-road vehicles. With no other route through, the team’s target – the bright lights of the Beijing Motor Show – was slipping, and time was ticking.

It was with a justifiable cry of relief, then, that China finally rolled beneath the wheels of the four Land Rovers on the Journey of Discovery and this 13-country flash-tour through a mix of urban and off-road destinations – which demonstrated the fascinating diversity of the world we live in – was on the home straight at last.

It was ironic, too, that the very thing that had been blocking the path into China had been directly related to the very first story on this ‘journey of discovery’.

After rolling out of the Geneva Motor Show, the first stop was the Aosta Valley, where the team joined the experts from the Pila resort to discover the technique to protecting the slopes from avalanches. There, polar explorer Ben Saunders and cameraman Johno Verity – an avalanche survivor – watched as the kaboom of 20kg of explosives triggered a perfectly controlled avalanche, removing a threatening snow cornice before it become a danger.

It was a dramatic start, and after a stint of ice driving in Austria and a tour of the cultural European cities of Milan, Saltsburg, Vienna and Budapest – travelling with a police escort through Heroes Square – it was onto even more gritty stuff, as the first week ended with a haunting trip to Chernobyl.

More than 25 years since the world’s worst nuclear accident, this was the first private vehicle trip allowed into the 30km exclusion zone, and the peeling paint and sagging ceilings of buildings in the ghost town of Pripyat, once home to 50,000 young working professionals, showed a snapshot of a life destroyed.

With people filtering back, there is hope that one day the town may breathe again – and that was a story repeated time and again, in different situations, all the way along this intriguing route.

The Ukrainian cities of L’Viv, Kiev and Odessa were next up, passing by with visits to a Hogwarts-style pharmacy museum of potions and lotions; a micro miniatures museum with a 400-piece gold model ship smaller than a fingernail; and the Odessa Steppes, where a late decision by the crew to avoid damaging the famed walkway halted a planned descent.

The wheels then rolled into a former submarine shelter, carved deep into a mountain beside the Black Sea in Balaklava. Such a crucial part of the Soviets’ Cold War armoury, the entire town was taken off the map for more than 35 years and driving through the curved tunnels, designed to deflect accidental blasts from nuclear missiles once stored inside, revealed the stories behind a secret old world, now replaced by luxury yachts in the harbour outside. 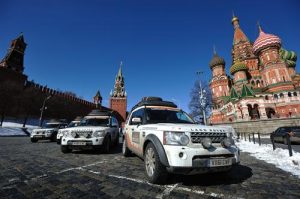 En-route to Moscow, up a slithering snow-covered driveway, the enthralling Mikhail Krasinets revealed a glimpse into Soviet automotive history through his incredible 300-strong collection of cars, with the modern Discovery off-roaders driving alongside an ancient Soviet equivalent.

In Moscow itself, an exclusive visit to the Kremlin was followed by a unique tour of the city’s sights with a former dancer from the Bolshoi Ballet, before the route into the awaiting ‘Stans’ was completed with a visit to the mighty statue of Mother Russia in Volgograd – soon to be the subject of a major motion picture under its former name of Stalingrad.

From there on in, the Journey took a twist and went into the wild as the highways turned to potholed roads; urban streets were replaced by remote desert outposts; slick border crossings lengthened into the night; and temperatures, which had been chilled for most of the journey, plummeted to new lows.

Meeting a rare mix of camels and heavy-duty lorries, the vehicles covered long distances, stopping at truck stops where the fresh fish gutted and sold out back often seemed easier to obtain than the precious fuel needed to keep the journey going.

Eventually, the team made it to the Aral Sea, where long abandoned rusting boats sit on a gargantuan seabed created by the chronic over-demand on its feeder tributaries 50 years ago. Again, in a story of recovery, local inhabitants now fish a tiny re-filled lake, their catch used to re-populate another new region in an effort to re-establish the ruined eco system.

In stark contrast, the cultural jewel of the Savitsky Museum in Nukus, deep in the Uzbekistan desert, offered the chance to explore a collection of over 90,000 avant-garde Soviet artworks, saved from destruction through years of hiding from the KGB.

From here, Islamic architecture spread far and wide as the Silk Road and Spice Route rolled out towards China, with Bukhara ‘spice master’ Mirfayz – whose family have traded in the same town for generations – handing out health teas and Uzbekistan’’s most famous pop star, ‘Karen’, providing a unique glimpse of Tashkent on the route through.

As the temperature rose and the flat arid plains turned to rolling grass and snow-capped mountains, the roads became rutted and it was a challenging drive to Lake Issyk Kul, where an old Soviet Spa in Cholpon-Ata, once a closed shop but now the region’s equivalent of Ibiza, offered a clinical conditioning experience far from the typical Western health hubs.

And so, heading south, after more than 6,000 miles, came the obstacle at the final border.

The 3,752m Torugart Pass came so close to repeating the route-blocking issues that forced the original Land Rover overland expedition in 1956 to re-direct to Singapore that it was a welcome relief to reach Turpan, the first main stop in China, and take a tour of an ancient Chinese winery that is forging ahead in a new and increasingly eager market.

But it says something about the incredible size of China – a thriving nation and a growing market for the likes of Land Rover – that almost 2,000 story-filled miles still remained.

The dunes of the Taklamakan Desert presented a playground of adventure with China’s most adventurous off-road driving club before the Great Wall offered a clear path to follow all the way to Beijing, via China’s biggest sand ski resort and a bizarre raft race on vessels floated by whole sheep skins on the Yellow River.

And when the wheels of the one millionth Land Rover Discovery rolled along the infamous tarmac of Tiananmen Square, it was mission complete. Without a scratch, but caked in the dirt of adventure, this one-in-a-million journey was over.