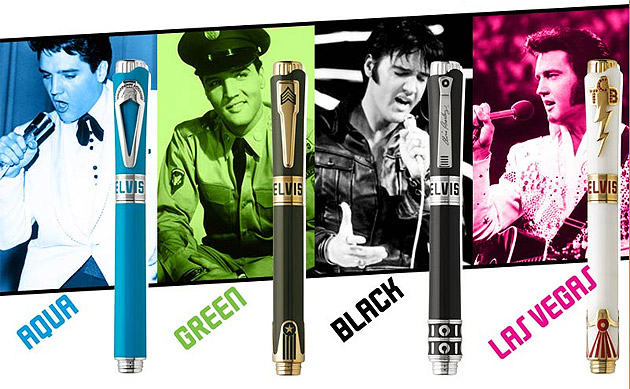 It’s not often that we get to feature the late King of Rock and Roll in Luxurious Magazine even though Elvis was a well known fan of Luxurious things having been the owner of a gold Midas watch and many magnificent jewelled pieces.

It seems fitting that the worlds foremost manufacturer of luxury writing implements, Montegrappa, the company that created the worlds most expensive pen, has now launched the latest edition of their ‘Icons’ series, an homage to Elvis Presley. The Elvis Presley pens, in conjunction with Elvis Presley Enterprises, as mentioned, is the latest collection within the Montegrappa Icons Series which pays tribute to global icons, people that have achieved global fame. Previous members of the ‘Icons series’ have included Bruce Lee, Muhammad Ali and Frank Sinatra. 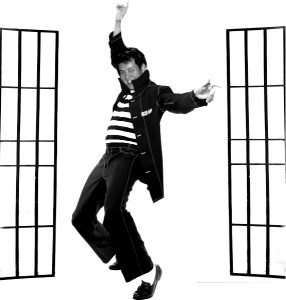 Luxurious Magazine founder, Paul Godbold, (see right) who in his youth had more than a passing resemblance to a younger Elvis is a huge fan of the ‘King’ with full sized Elvis artwork on the walls of his Media room and even going as far as narrowly missing out bidding on an identical Midas watch to Elvis’ at auction. Although Paul is seen as somewhat of a conservative style aficionado, he immediately said “the white one with gold, that’s what I’d go for, that says Elvis to me!”.

For 2013 Montegrappa celebrates probably the most iconic of all entertainers, a man that broke down boundaries, achieved true global fame and transformed music and fashion from the 50s though to the 70s.

There are four models within the collection, each one representing different phases of the King of Rock and Rolls Career. The reason behind there being four harks back to the ‘Million Dollar Quartet’ comprising of Elvis, Johnny Cash, Jerry Lee Lewis and Carl Perkins who met up for one day in 1956, the date was fittingly the 4th of December.

The Elvis Pen variations have a resin body colour that corresponds to four important period of Elvis’ life, each with sliver or gold accents, even the nibs on the fountain pens are engraved with an image of Elvis at the microphone. Other details found upon the pens and packaging also denote stages of Elvis’ career along with a CD of his greatest hits.

Let’s take a look at each variation of the Montegrappa Elvis Icon Series in more detail: 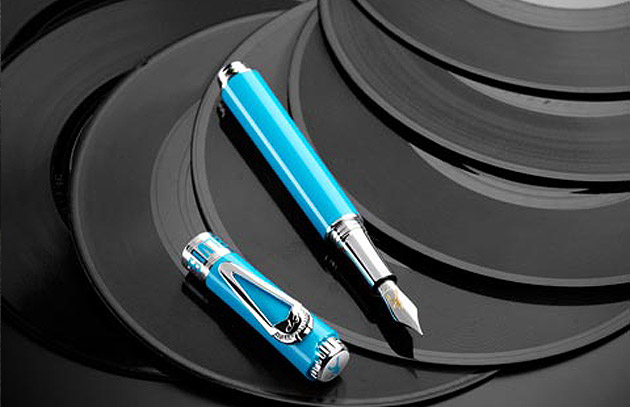 The 1950s – For this period of Elvis’ career Aqua was selected, a colour that ‘chimes’ with the the two-tone vehicles, electrical appliances and iconic guitars of that time. The pocket clip on this pen recalls a period jukebox and it was 1956 when Elvis really hit the big time. The limited edition Montegrappa Elvis Aqua coloured pen collection will comprise of 500 fountain pens, 500 Roller Balls and 956 Ballpoint pens. The Gold editions will be limited to just seven of each type equalling 21, his age back in 1956. 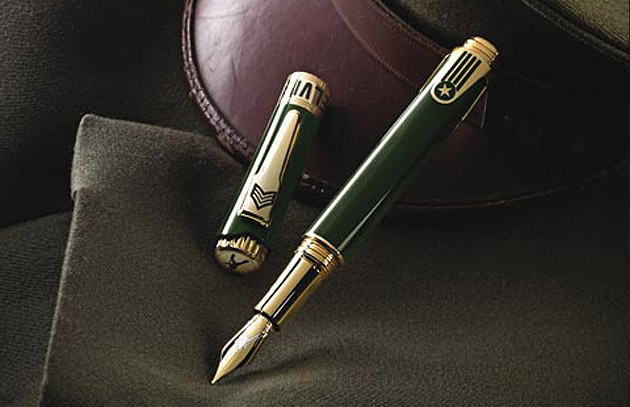 1956 – For this year, Army Green was chosen as this was the year that Elvis joined the US Army. The pocket clip on the pen features three stripes signifying his rank of sergeant. For this model, Montegrappa has prepared 500 fountain pens, 500 roller balls and 958 ballpoint pens. The gold edition will be issued as 11 fountain pens, 11 rollerballs and 11 ballpoint pens, the tally of 33 equalling the number of films he made: 31 features and two live documentaries. 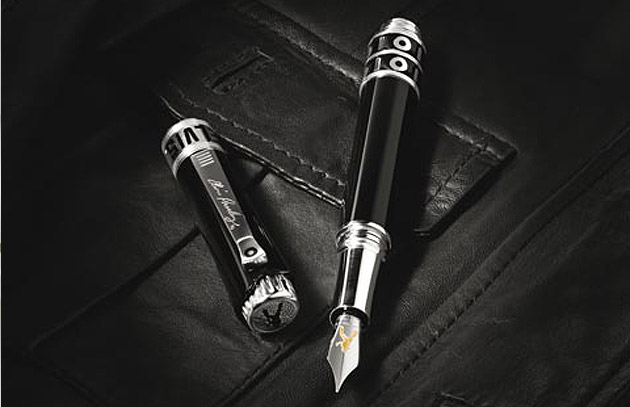 Black represents 1968 – the year of Elvis’ “comeback special,” in which he wore his famous black leather outfit. The pocket clip represents the zipper on the jacket, while the decorations at the bottom of the barrel were inspired by other details of Elvis’ black leather attire. For this model, Montegrappa have produced 500 fountain pens, 500 roller balls and 968 ballpoint pens. The gold version will be offered as 11 fountain pens, 11 rollerballs and 11 ballpoint pens for a the total of 33, his age in 1968. 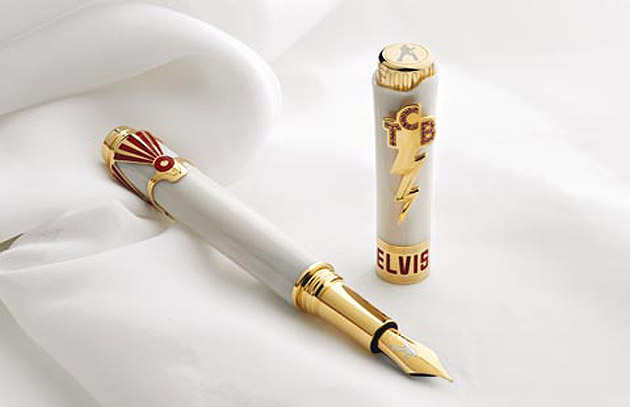 White was selected for the ultimate model in the quartet (we promise that Mr Godbold did not know this), representing 1973 – the year of the ground-breaking “Aloha From Hawaii” broadcast, transmitted live via satellite on January 14, 1973 and seen by an estimated one billion people. Unless you are from another planet, you’ll also realise that white was chosen to represent the gleaming white jumpsuits that Elvis wore on stage, upturned colours, rhinestone adorned and often mimicked my people that lived in this era whenever an opportunity to dress up for a costume party arises. The pen is set with stones on the cap’s band, and the pocket clip recalls Elvis’ message to his closely-knit band of friends: “TCB,” for “Taking Care of Business.” Montegrappa have made 500 fountain pens, 500 roller balls and 973 ballpoint pens of this edition. The gold version will be released as 14 fountain pens, 14 rollerballs and 14 ballpoint pens, totalling 42 in honour of his age when he passed away in 1977.