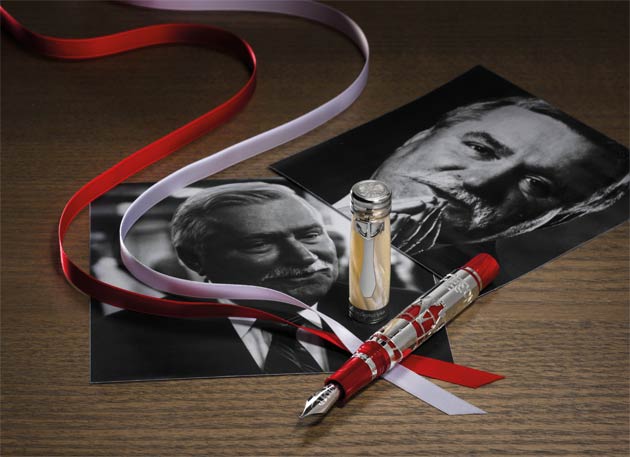 Created in celluloid, embellished with detailed metalwork, the Montegrappa Lech Wałęsa Excellentia pen is offered in both fountain pen and rollerball forms. 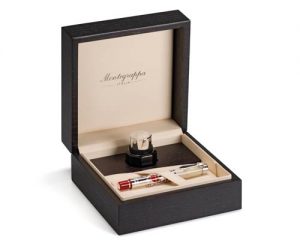 Montegrappa’s designers and craftspeople have used form, colour and detail to represent a remarkable life. In deep blood red, the celluloid barrel represents the colours of both Poland and of Solidarity. Around its base is metalwork showing the outline of the Polish shipyards where the movement was born, engraved with the word “Nobel” and the year “1983”. The contrasting white-coloured cap bears a pocket clip with an anchor drawing inspiration from the Monument to the Fallen Shipyard Workers in Gdańsk, while the cap is crowned with the Polish eagle coat of arms. The nib of the fountain pen is etched with a silhouette of the face of the great Polish leader.

This writing instrument has been produced in a limited series of 1983 fountain pens in sterling silver, cor­responding to the year Lech Wałęsa was awarded the Nobel Prize, and 70 rollerball pens in sterling silver, representing his current age. 30 solid 18K gold fountain pens mark the years since Mr. Wałęsa was granted the Nobel Prize, and 25 solid 18K gold fountain pens with diamonds represent the 25th anniversary of the regime change since 1989.

About Lech Wałęsa
Lech Wałęsa is the celebrated leader of the “Solidarity” (Solidarność) movement, who guided it to a non-vio­lent victory over the Communist regime in Poland in the late-1980s. His life has been inextricably linked with the history of Solidarity and Poland’s path to freedom.

Born on 29 September 1943, Wałęsa’s dissident activities date back to 1968, when he encouraged his fellow workers in the Gdańsk Shipyard to boycott the official rallies condemning students’ strikes. From that time on, he became increasingly active in social affairs in Poland, participating in the Strike Committee during the December 1970 protests. He was offered the post of the president of the Committee.

After the tragic developments of the 1970 strike, which resulted in the death of 39 workers, he swore that he would never allow for such a situation to take place again. Soon afterward, Wałęsa grew strongly committed to the dissident Free Trade Unions. He would organise Shipyard workers’ activities, distribute underground leaflets and hold meetings to teach workers about their rights and self-education.

As one of the main instigators of the August protests in 1980 at the Gdańsk Shipyard, his personal stand, tenacious negotiations and campaign for the striker’s demands led to the establishment of the Free Inde­pendent Trade Union “Solidarity”. It was the first bloodless victory in Polish history. It also focussed the eyes of the entire world toward Gdańsk and Lech Wałęsa.

Poland’s totalitarian regime reacted to these developments by introducing martial law on 13 December 1981. Wałęsa was among the first individuals to be interned.

Throughout the dark time of martial law and the difficult period after the ban of Solidarity, when the Union was routed and few people retained any hope for victory, Wałęsa would not surrender. He remained the living symbol, spokesperson and propagator of the idea of solidarity. Despite fabricated rumours about Wałęsa and continued repression by the security authorities PRL, he did not yield. His struggle was recognised both in Poland and abroad. In 1983 he was awarded the Nobel Peace Prize. Unfortunately, freedom had to wait. By the end of the 1980s, Lech Wałęsa sat down to negotiate with the Communist authorities at the Round Table as the head of the delegation of the democratic opposition. His determination and courage led to a compromise with the already weak, but still dangerous Communist regime. The compromise resulted in the elections of 4th June 1989 and the establishment of the first non-Communist government on the Eastern side of the Iron Curtain.

On 22 December 1990, having served as Solidarity’s Chairman for its first decade, Lech Wałęsa became the first democratically-elected President of the Republic of Poland, in a general election. While in office, and after completing his presidential term, Lech Wałęsa remained the spokesperson for the Polish cause in the internatio­nal arena.

He continued to strive for Poland’s accession to NATO and the European Union. In 1995, he founded the Lech Wałęsa Institute, whose mission is to popularise the achievements of Polish Solidarity, educate the young, promote democracy and build civil society in Poland and around the world.

Today Lech Wałęsa continues his mission as the spokesperson for solidarity. He travels the world retelling the Polish experience and of the bloodless struggle for peace and democracy. Through his lectures and dialogue with people, he calls for the building of a modern world founded on universal values. Being a supporter of globalisation and seeing the opportunities offered by new technologies and the development of civilization, he encourages the creation of new structures for the peaceful cooperation of nations in the 21st century.