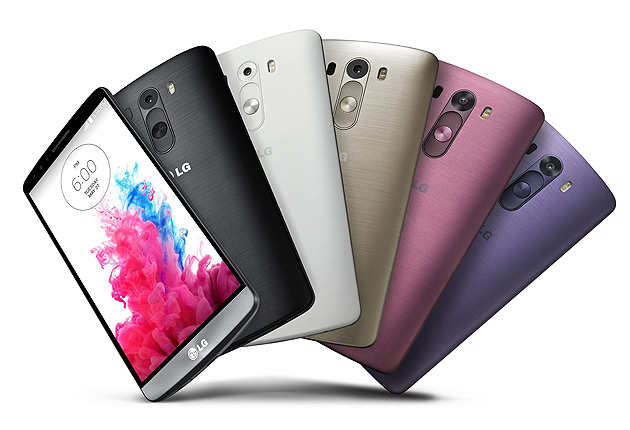 Around the world, people have been awaiting the launch of LG’s latest super-phone, the G3. We’re pleased to announce that it’s here – was it worth the wait and does it offer all that was promised?

First thing to note is that the LG G3 looks good with its polished metallic skin. It has a 5.5″ screen that fills almost all of the case with a Quad HD display and 538ppi. This resolution is four times that of HD and almost two times higher resolution than a Full HD display. The G3 boasts a screen ratio of 76.4 percent with thin bezels all around and just as important feels incredibly comfortable in the hand. The G3 is powered by the Qualcomm Snapdragon™ 801 (up to 2.5GHz Quad-Core) with memory options of 16 and 32GB and microSD slot capable offering maximum capacity of 128GB.

Battery life is always one of the biggest concerns with a super-phone, the bigger the spec the more power is needed. To address this, LG equipped the G3 with a 3,000mAh removable battery and advanced optimization technologies to further maximize battery efficiency. By replacing the metal in the battery cathode with graphite, LG engineers were able to extend the lifespan of the G3’s battery. The result is a battery that can keep up with the Quad HD display’s ultra-high performance without losing steam in the middle of the day.

As mentioned earlier in the article, the Floating Arc design of the G3 with its ergonomic arch and slim side profile provides an extremely comfortable grip for everyday one-handed use. The Rear Key continues to anchor LG’s innovative design language, with a newly designed power key and volume buttons as well as more premium quality materials and finish. LG also refined sophisticated technical features and advancements located on the rear by arranging them in a clean and singular layout consistent with the G3’s well-balanced design language. The stylish metallic skin with matte finish which keeps the G3 looking clean and fingerprint-free will be offered in five vibrant colors: Metallic Black, Silk White, Shine Gold, Moon Violet and Burgundy Red.

To complement the new external design, LG adopted a minimalistic user interface design with flat graphics. The circular motif of the graphic assets in the new UI was derived from the shape and concept of LG’s logo, reflecting its unique visual style and identity.

Perhaps the most exciting feature for us at Luxurious Magazine is the camera and video capabilities. As many of you will know, we love the Nokia Lumia 920 and 1020, models with photographic ability that is about the best in the market, the only slightly disappointing aspect with the Nokia Lumia’s is the video capability, don’t get me wrong, its good, actually it’s very good, but we need great and this where the LG G3 comes into play. The LG records video in 4K up to 3840 x 2160 coupled with decent sound quality via instinctive microphones that measure the environment to identify the optimal audio level for the clearest recording. For the mobile reporters and bloggers among you, the phone should also do [email protected] so no more jerky videos!

The G3 has a 13MP OIS+ camera designed to quickly and easily capture special moments as they occur, not necessarily when you want them to occur. This is made possible with G3’s innovative Laser Auto Focus, the first of its kind in the smartphone industry. This technology enables the G3 to capture the best moment – even in low light – by measuring the distance between the subject and the camera using a laser beam. So no more fuzzy pictures of your son or daughter scoring their first football goal and or missed shots. Combined with the proven and popular OIS+ technology first seen in the G Pro 2, the G3 should impress even the most discerning shutterbugs.

LG also simplified the process of actually capturing those special moments. Rather than having to focus on the subject in preview mode and then pressing the shutter button, with the G3, tapping the subject to focus will simultaneously also trigger the shutter. What’s more, the G3’s 2.1MP front camera incorporates several new enhancements such as a larger image sensor and larger aperture for more light throughput and better-looking selfies. A unique twist has been added to the standard timed selfie mode by incorporating gesture controls ― when ready to shoot, simply clench your hand into a fist and the G3 will recognize the gesture and begin the automatic three-second countdown. It couldn’t get any simpler than that.