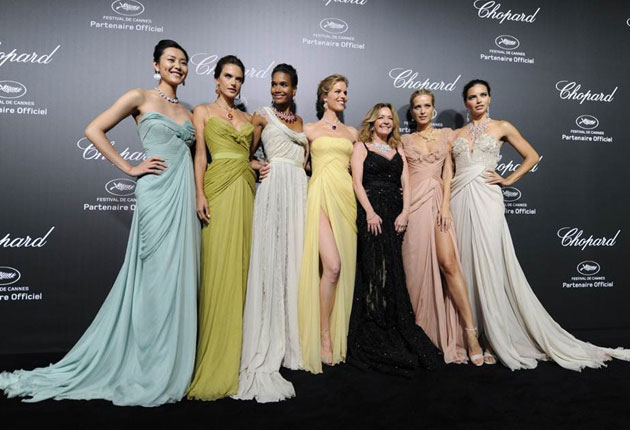 Chopard – In addition to being unparalleled when it comes to creating exceptional watches and jewellery, it is also well-known for its magnificent soirées.

This year, the Swiss jeweller brought back the magic and glamour of a movie set during an unforgettable party. More than 750 guests thus travelled from one movie set to another thanks to a completely rebuilt plane in the magnificent Hangar 16 at the Cannes-Mandelieu aerodrome. A fashion show with famous models wearing the most recent Red Carpet Collection, a concert by German-Nigerian singer Ayo and the legendary Kool & the Gang group along with outstanding decor completed the evening.

This year, Chopard chose the theme “Backstage” as the common thread of its activities at the 67th Cannes Film Festival. Aside from a photography exhibition devoted to the backstage of the famous Cinecittà studios and a Red Carpet Collection inspired by actresses from the golden age of Italian cinema during the 1950s and 1960s, Chopard organised a magnificent party during which guests were transported onto movie sets recreated for the occasion.

An original, unique location
The setting for the Cinecittà as imagined by Chopard was the new Hangar 16 at Cannes-Mandelieu airport. Completed less than a year ago, this immense, majestic hall made of wood, concrete and glass provided a unique location for the Backstage theme. For an entire week, around a hundred people were at work in the 4000m2 building to recreate a real plane and set up the various different decor. During the first part of the evening, 200 people gathered for an exclusive dinner served under the plane.

Black and white decoration – a nod to the movies of the time – was broken only by the flamboyant appearance of models adorned in multi-coloured creations from the new Red Carpet collection.The parade ended with a flourish with the appearance of top models Eva Herzigova, Adriana Lima, Petra Nemkova, Alessandra Ambrosio, Liu Wen and Arlenis Sosa, each more sparkling than the last in Chopard jewellery and Elie Saab Haute Couture dresses. Other highlights of the dinner was the enchanting performance by singer Ayo combining reggae, soul and folk rock sounds.

A journey to the heart of the jungle
At 11pm, it was time to experience the second part of the evening in a completely different atmosphere. Guests were invited to enter the plane from the back entrance cross through it and exit by the front door, in order to disembark and join the other guests in the heart of a luxuriant jungle on a desert island looking like a tropical garden of Eden. A great many stars accepted Chopard’s invitation to visit a movie setset in a lost paradise somewhere between fiction and reality. Among them were Colin and Livia Firth, Harvey Weinstein, Sonam Kapoor, Masami Nagasawa, Natasha Poly, Coco Rocha, Suki Waterhouse, Bianca Brandolini, Selita Ebanks, Louis-Marie de Castelbaljac and Valentina Zelyaeva. Far from feeling tired by their travels to a far-off land, guests danced until the first light of dawn, led by the legendary Kool & the Gang group.