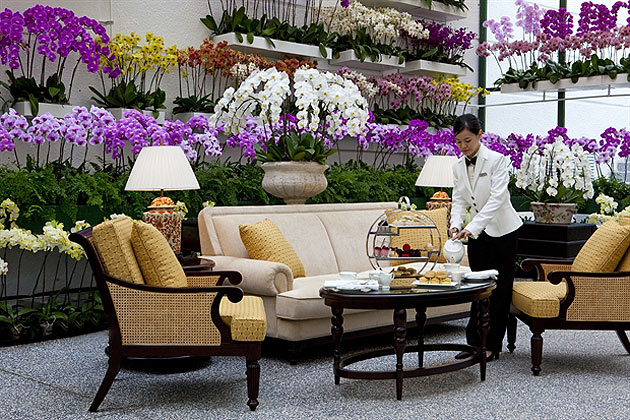 Colonial cuisine is an interpretation of traditional British fare with Asian ingredients and cooking methods, invented by Hainanese cooks who worked for British expatriate families who were homesick for British food.

Sit under the sky light and soak up some rays while you feast on the Baked Seafood Crab Shell or the Lobster Thermidor. While savouring the delightful menu, one can’t help but take in the light and airy ambience and colonial décor which recreates the atmosphere of the halcyon days of the planters of Malaya. Come nightfall, under the gold-leafed dome and in front of the bar, the family of legendary Maestro Alfonso Soliano play golden oldies and all-time favourites with the dulcet tones of Irene Soliano adding to the charm of this gem of a place.

Sidle up to the bar and order the Majestic’s signature cocktail called ‘Code 55 & 2 Bulat’. If time is on your side, ask the bartender the tale of how this cocktail came about. Your eyebrows might rise higher than usual when you find out how this beer, lemonade, gin and whisky concoction got its name.

Contango, on the other hand, is located in the new Tower Wing and serves up a variety of international cuisine. Chef Mohamad Zaidi has done a fabulous job in implementing the interactive dining experience for his guests who can order food directly in the open-kitchens and observe the chefs cooking their order. Luxuriously designed and contemporary in feel, Contango serves a wide variety of dishes freshly prepared to order.

There are 2 open kitchens, one serving Asian cuisine – Malaysian, Thai, and Japanese while the second kitchen serves Western cuisine including a salad bar as well as grilled items. Italian made-to-order pasta is available as well as a wood-fired pizza oven and churrasco grill, ensuring everything is freshly made and piping hot when it arrives on your table.

For dessert lovers and those with a sweet tooth, be warned – the cakes and pastries are to die for as well as the gelato counter. For wine connoisseurs, here’s something to look forward to as well – The Majestic has an unrivalled Opus One vertical collection which was created between Baron Philippe de Rothschild and Robert Mondavi. And for the civilised ritual of English tea, the Tea Lounge, adjacent to the Colonial Café serves afternoon tea with bite-size sandwiches, sweets and savouries as well as a selection of exotic teas and herbal infusions from Ronnefeldt.

With resident pianist Ooi Eow Jin tinkling the ivories, teatime at the Majestic has become one of the most popular occasions with both guests and local visitors alike.

Royal Bliss
Located in a separate building next to the Majestic Wing and with its own private pool overlooking the iconic Railway Station is the Majestic Spa, a haven of calm and relaxation.

The pièce de résistance must be the Malaya Golden Chersonese, a treatment for couples which include a hair masque, steam bath, scrub and massage. Don’t be surprised if you fall asleep during the treatments as everything about the spa is conducive to total relaxation.

The Smoke House
Although the Majestic is a smoke-free hotel, for those who wish to smoke, there a specially dedicated building. The Smoke House is located in an adjacent and separate building and was created reminiscent of gentlemen’s clubs of the 18th Century in London’s West End, there are a lounge and bar, cigar room, card room, billiard table, private dining room with a chef on call and a plaid-walled private screening room which shows classic black and white movies such as Casablanca and Citizen Kane. You couldn’t ask for anything more cosy and exclusive than this.

Royal Cut
Located in the Smoke House at the Majestic Wing, Truefitt & Hill is the quintessential English Gentleman’s groomer. Hailed as the oldest barbershop in the world, the London-based barber is mentioned in novels by Charles Dickens and William Thackeray and has served Monarchs of Great Britain throughout nine consecutive reigns. Try the Royal Cut which doesn’t involve a guillotine or the Ultimate Shaving Experience for a shave that’s so close, you might mistake your face for a baby’s bottom.

The Majestic Hotel Kuala Lumpur is the only hotel in Kuala Lumpur to be a member of the Leading Hotels of the World’s luxury hotel collection and today it is owned and managed by YTL Hotels.