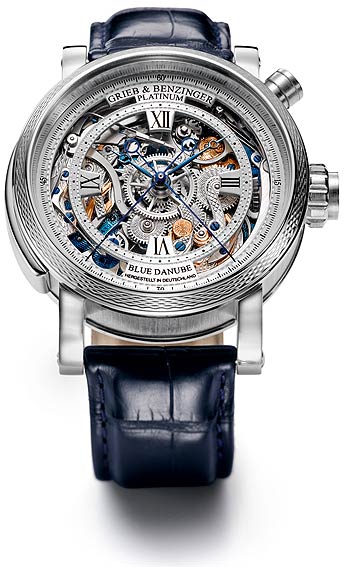 This amazing new Grieb & Benzinger Blue Danube masterpiece is based on a gorgeous base movement originally made by Patek Philippe for Tiffany in about 1890. With a diameter of only 36.5 mm, this tremendous assembly of complications including a minute repeater and a split-seconds chronograph is extremely rare in such a small movement. Keeping in mind that this movement is already about 120 years old, it is doubtlessly a sensation and tribute to historic watchmaking.

This extraordinary and complicated wrist watch displays the intense workmanship associated with the hand-engraving and guilloché as well as the hand-skeletonization modifications of plates and bridges which are also finished with rose gold or rhodium coating. Every single component of the Grieb & Benzinger Blue Danube must be treated and restored, some had to be entirely replaced and, of course, they all had to be reassembled to form one functional unit after treatment. The detailed restoration of the more than 400 components within this movement required intense attention and took more than 6 months intensive work. In comparison to the production of new movements, the treatment in the Grieb & Benzinger workshops was so intensive that it came close to a brand new production rather than just a restoration. And the end result was not just a restoration – it became horological art at its finest.

A signature element of every single Grieb & Benzinger Platinum is the blue platinum coated base plate. This was created to honour the famous Abraham-Louis Breguet student Charles Oudin a man who has already built movements with blue base plates about 1820. The Grieb & Benzinger workshop is proud to own one of these rare original blue Oudin movements. Since there were a striking amount of timepieces with blue base plates supplied by Swiss watch manufacturers (through Bovet and Charles Oudin among others) to imperial China of the Qing Dynasty under Emperors Jia Qing and Dao Guang, the Grieb & Benzinger Blue Danube also symbolizes these historical roots.

The dial is another highlight and signature element of the Grieb & Benzinger Blue Danube. Skeletonized by hand and with a rare Breguet frosted finish it unequivocally shows the connoisseur the technical prowess needed to turn such an historic movement into a new masterpiece.

The Grieb & benzinger Blue Danube is a true collector’s item: a minute repeater split-seconds chronograph in typical Grieb & Benzinger finish – a real one-of-a-kind watch. In a solid 43 mm diameter case, a unique timepiece that is not only a design statement on the wrist but again the heaviest platinum watch of its kind worldwide and of course a piece of art for only one lucky collector worldwide for 350.000€ / US$ 450,000 (net).