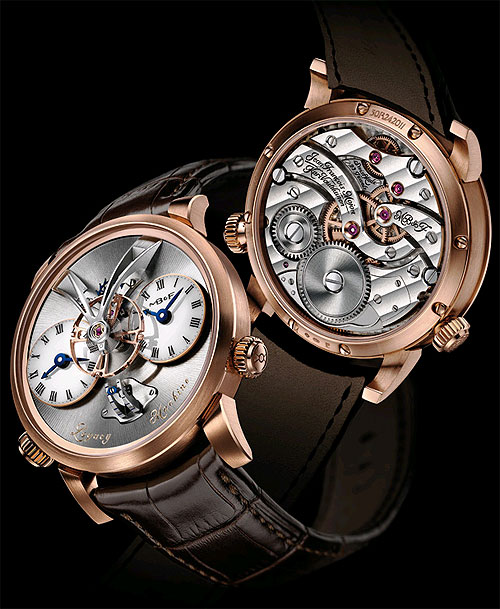 Wild, extreme, outrageous, unrestrained: all might be used to describe MB&F’s futuristic Horological Machines, but traditional, classical… round? With its monumental central balance; superlatively finished movement; completely independent dual time zones; unique vertical power reserve indicator and elegant annular case, the MB&F Legacy Machine No1 (LM1) is a tribute to the great innovators of traditional watchmaking; and above all, an authentic three-dimensional MB&F Machine.

The MB&F Legacy Machine No1 was conceived when Maximilian Büsser started fantasising: “What would have happened if I had been born in 1867 instead of 1967? In the early 1900s the first wristwatches appear and I would want to create three-dimensional machines for the wrist, but there are no Grendizers, Star Wars or fighter jets for my inspiration. But I do have pocket watches, the Eiffel Tower and Jules Verne, so what might my 1911 machine look like? It has to be round and it has to be three-dimensional: Legacy Machine No.1 was my answer.”

In fidelity to high-quality 19th century pocket watches, the MB&F Legacy Machine No1 watch features a sedately oscillating (2.5 Hz), large diameter balance with traditional Breguet overcoil suspended from majestic twin arches; its enigmatic regulating mechanism in full view, but without apparent connection to the movement. Both the hours AND the minutes on each of the two sub dials can be set completely independently of each other – dual time zone complications usually do not allow independent adjustment of the minutes – their domed dials further reinforcing visual references to the golden age of watchmaking (1780-1850). Looking like a miniature sextant, a world-first vertical power reserve indicator keeps track of available power while providing a visual three-dimensional counterpoint to the graceful arches supporting the balance. 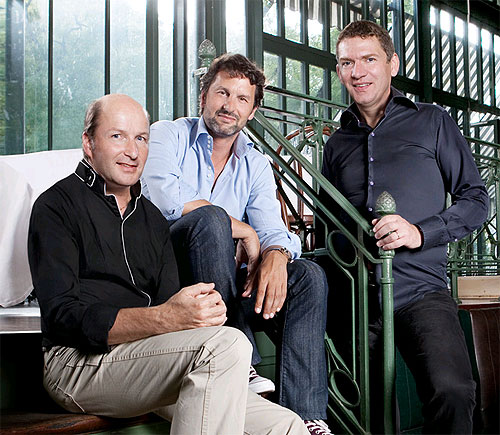 The MB&F Legacy Machine No1’s transcendental in-house movement bears testimony to the enormous talent of its creators. Jean-François Mojon and his team at Chronode (Best Watchmaker Prize at the 2010 Grand Prix d’Horlogerie de Genève) met the considerable challenge of developing the calibre for Legacy Machine No1 from a blank sheet, while acclaimed independent watchmaker Kari Voutilainen took responsibility for the aesthetic design and for strictly ensuring the utmost respect for tradition and finish. Immaculate Geneva waves, highly-polished gold chatons and bridges with impeccably executed bevels following deliberate internal angles (which cannot be finished by machine) showcase the movement’s absolutely peerless fine-finishing. The movement of MB&F Legacy Machine No1 watch proudly bears the names of both its creators, and is the first calibre other than Voutilainen’s own to bear his name.

A look inside the MB&F Legacy Machine No1 watch

Inspiration and Realization: Maximilian Büsser has had a long affinity with pocket watches of the 18th and 19th centuries. Virtually all horological complications we see today were not only imagined in that period, they were developed using just paper and pen (no sophisticated computer programs), components were produced to extremely high precision using – by today’s standards – fairly primitive machines (no electricity) and finely finished, assembled and regulated to an incredibly high quality that we still strive to match today. Their generous size compared with modern wristwatches allowed for uncluttered movement architectures with beautifully shaped bridges and plates.

While MB&F’s futuristic Horological Machines have a firm foundation in the very best of traditional horology, Büsser wanted to pay homage to that rich tradition by imagining the type of timepiece he might create if he had been born 100 years earlier, in 1867 instead of 1967. With its large, sedately oscillating balance, domed dials, historical bridge design and classical fine-finishing, Legacy Machine No.1 is the very contemporary, yet traditionally elegant, fruition of that dream. 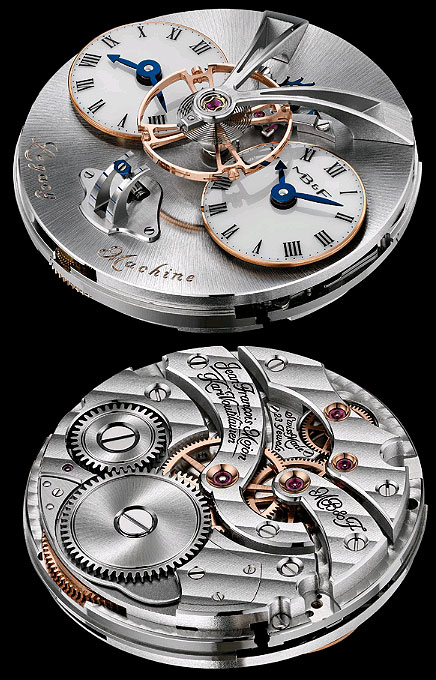 Engine: The MB&F Legacy Machine No1 watch ingenious three-dimensional movement was specifically developed for MB&F from Maximilian Büsser’s sketches by Jean-François Mojon and his team at Chronode in Le Locle, Switzerland. The balance wheel and spring are at the very heart of any mechanical watch movement and are responsible for regulating timekeeping accuracy. Büsser has long been fascinated by the large slowly oscillating – 18,000 bph compared with the 28,800 bph common today – balance wheels of antique pocket watches, so it was no surprise this was his starting point from which to let his fertile imagination roam free. What was surprising though is just how radically he re-interpreted tradition by relocating the balance wheel from its more usual position hidden at the back of the movement to not just the top of the movement but majestically floating above the movement… even floating above the dials!

While the location of MB&F Legacy Machine No1’s regulating organ may be considered avant-garde, ‘tradition’ is upheld by the large 14mm diameter balance wheel with regulating screws specifically developed for MB&F, balance spring with Breguet overcoil and mobile stud holder.

Another very special feature of the MB&F Legacy Machine No1 movement is the ability to set the two time zones completely independently. The vast majority of dual time zone movements only allow the hours to be independently adjusted, a rare few offer setting to the half hour. Legacy Machine No.1 allows both hours and minutes of each dial to be set to whatever time the user wishes.

The world’s first vertical power reserve indicator on Legacy Machine No1 is driven by an ultra-flat differential with ceramic bearings allowing for a slimmer complication and a more robust and longer-wearing mechanism.

Dial and Indications:  The rate keeping of the twin dials is controlled by the same regulator (balance and escapement) so that once set, the two times stay perfectly synchronised with each other. Both the hours AND minutes on both dials can be set to any time desired via their respective crowns.

Complementing the three-dimensionality of the balance floating in space, the dual white dials with their bright blue gold hands float above the top of the movement. The dials are gently domed with a translucent, high-gloss lustre created using a laque tendue process in which multiple layers of lacquer are applied and heated, causing them to stretch over the surface of the dials.

To ensure aesthetic purity of the dials and their traditional Roman numerals, a sophisticated fixation underneath negates the necessity of visually obtrusive used screws. A fine golden perimeter circumscribing each dial elegantly reinforces their timeless classicism.

Fine Finishing and Historical Legitimacy: Acclaimed master watchmaker Kari Voutilainen assumed responsibility for ensuring the historical accuracy of the style and finishing of the MB&F Legacy Machine No1 watch movement. No easy task with such an unconventional suspended-balance design from which to begin.