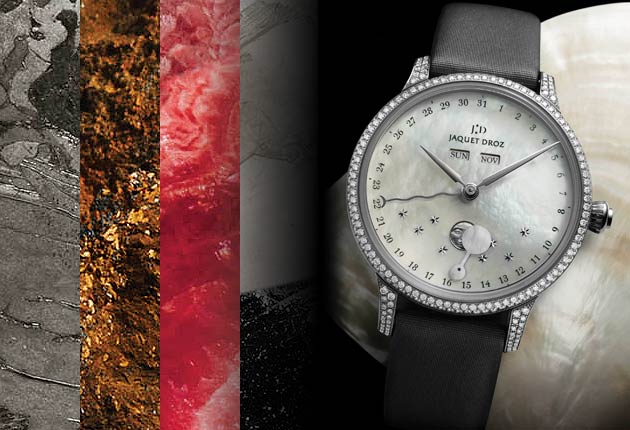 Out of the hundreds of watch brands that Luxurious Magazine works with, Jaquet Droz is one of our absolute favourites. Quite simply they produce watches that look great and this collection showing their use of minerals shows exactly why.

ack in the 1960s and 70s mineral faced watches were all the rage and judging by the prices that some of these vintage watches achieve at auction the pasion for these jewelled pieces is just as strong as ever. Jaquet Droz is an expert at producing wonderful dialled timepieces from exquisite materials capturing the stones natural brilliance, the end result is beautiful and functional jewellery for the wrist.

The advantage of using minerals for the dials is that no two timepieces will ever be identical and the play of light, color and depth will always look subtely different. Jaquet Droz have carefully chosen their materials to ensure that their should be something to meet every individual taste. The materials are aventurine, bronzite, imperial jasper, lapis lazuli, meteorite, mother-of-pearl, onyx, ruby heart, spectrolite. Let us take you through the minerals one-by one.

Aventurine
Aventurine glass is the result of a fortunate mistake. At the beginning of the seventeenth century, a master glassblower in Murano dropped metallic powder into molten glass. Once it had cooled, the glass had a scintillating and mysterious sparkle. From this fortuitous mistake this ornamental iridescent glass was born. It paints the picture of a night sky sparkling with stars. From its intense blue emanates a depth that has been captured by the Lady 8 by Jaquet Droz. In constant motion, its stars shine with a soft and comforting light.

Bronzite
Displaying an array of brown, ocher and gold tones, bronzite is a stone with multiple nuances of color. Its scintillating landscape of earthy hues is revealed by polishing the stone. It is the depth of these reddish and beige particles that bring it to life. Warm and subtle, it draws its force from the ground from which it came. A very ordinary looking stone in its raw state, human genius elevates it to a superior state. This is how the Grande Seconde Bronzite by Jaquet Droz casts its light, thanks to the expert human hand that is capable of revealing the best of the mineral.

Imperial Jasper
To create imperial jasper, nature paints with water colors in soft unctuous, sometimes even delicious tones. Tender yellows, pinks, greens, oranges and even blues, tumble together, captivating the attention. They interlace in inexhaustible multicolored complexity. Found only in a canyon deep in the heart of Mexico, this stone is one of the finest jaspers. It is characterized by the patterns that run through it, veins of minerals that flow across the watch dial of the Grande Seconde Imperial Jasper by Jaquet Droz.

Lapis Lazuli
Lapis lazuli was the most precious stone in Antiquity. Early civilizations from the Egyptians, to the Incas and the Sumerians were fascinated by the tonic vibration of its intense color. This stone is a blend of dense blue particles with traces of white and gold. When these particles are evenly dispersed, lapis lazuli comes alive. This made it the most precious pigment of the Renaissance: ultramarine blue. Its unique color gives the Grande Date Lapis Lazuli by Jaquet Droz its emotion and its delicacy.

Meteorite
Within the inert immensity of the Earth lies a radiant treasure. Rocks, crystals and minerals remind us that nature is an artist. Born in the depths of our planet or in the farthest reaches of the universe, they inspire a rare and inexhaustible emotion. This is the mineral soul of Jaquet Droz, which captures the natural brilliance of stones and uses them to adorn its watch dials. Cut from rough materials in their raw state, they reveal their fascinating beauty when they have been worked. Adorned in this way, mineral watches by Jaquet Droz become naturally unique. Their play of light, color and depth transcends the material and is ushered into the realm of beauty.

Mother-of-Pearl
Possessing all the qualities of a mineral and yet a living material, mother-of-pearl is the inner face of certain precious shells. The matrix in which pearls are born, it is like a skin that gives them their luster and their iridescence. The fruit of a lengthy gestation, mother-of-pearl is warm to the touch. The color of the shimmering sheen that runs across its surface is called “orient”. The orient of the Éclipse Mother-of-Pearl by Jaquet Droz is closest to white, but glimmers of pink, blue and green can be seen. With a vibrant moiré effect, mother-of-pearl makes the light dance.

Onyx
Black is the most powerful color, and also the most distinguished. The iconic black stone, onyx, is the color of the depths of the Earth. And yet, it shines. Its impeccably smooth and uniform surface reflects light instead of absorbing it. Jet-black with a mysterious brilliance, onyx belongs to the agate family, but it is of a very particular type. It has depth and life, as well as all the elegance of evening attire. Somberly seductive, the Grande Heure Minute Onyx by Jaquet Droz possesses warmth and style.

Ruby Heart
In Sanskrit, rubies are called “ratnaraj,” which means king of stones. Ruby crystal is its matrix. A crystal naturally tinted by chrome, its warm palette is unlimited. From pale pink to the hottest red, or mauve blended with purple, ruby crystal the gemstone’s power and intensity. It also possesses the beauty of scintillating lace, a motif that makes it unique. The power of the color and its density give the Petite Heure Minute Ruby Heart by Jaquet Droz its intriguing sparkle, while its warmth makes it an object of temptation.

Spectrolite
A rainbow captured in stone. Spectrolite, also known as labradorite, was discovered in Canada’s Far North. Could this be where it stole its iridescent fluctuations from the Aurora Borealis? Somber in its raw state, spectrolite takes on the colors of a thousand flames when polished. Turquoise blue, emerald green, dark brown marbled with amber, the tones fluctuate whenever a changing light glances over its surface. The random arrangement of the colors and their dance makes the Grande Seconde Spectrolite by Jaquet Droz a spectacle in motion that is constantly renewed.