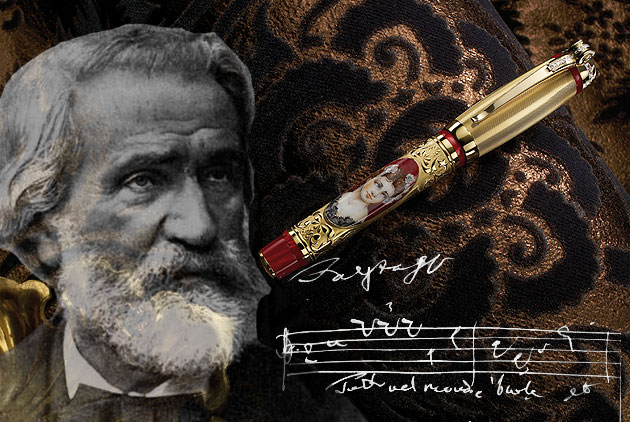 The Montegrappa Verdi Bicentenary Concert was held on October 10th to celebrate the great opera composer Giuseppe Verdi, who was born on the same day 200 years ago in 1813.

Verdi is without doubt the most prolific of all opera composers, with his operas being among the most popular in the world, both by number of productions as well as by audience attendance. His most famous operas are La Traviata and Rigoletto. Montegrappa also used this occasion to launch their latest pen, the Rigoletto limited edition. This follows the launch of the Giuseppe Verdi tribute pen that was launched earlier this year as part of the Verdi 200 celebrations, and the spectacular La Traviata pen that was launched several years ago.

Montegrappa is synonymous with music and culture, having created a remarkable homage to the great composer in the form of the La Traviata collection, in our opinion the most beautiful of all the Montegrappa writing implements. Although the main focus of this article is the celebratory concert, it would be remiss of us not to mention the incredible La Traviata collection. The La Traviata is art in the hand, the cap top has an engraved camellia, the barrel is also decorated with a camellia created with a refined low relief engraved technique. A cameo that frames Violettas portrait is created on the barrel with the burin engraved technique on the silver version and with an ancient hot enameling technique in the diecast clip evokes the typical ornamental elements of the 18th century. Fine celluloid details are in red, the colours that has always symbolized passion, and the 18k gold nib is engraved with the initial of Violetta Valery.

The Montegrappa Verdi Bicentenary concert featured performances by the Emirates Opera Project, a group of professional opera performers living in the UAE promoting local productions of classical music and opera. They were supported by the Sharq Orchestra and conducted by Martyn Bagnall, a well known British conductor who earlier in the year conducted a local production of Verdis Requiem. All the musicians and singers involved in this event are resident in the UAE, showing the amazing talent pool that this country has attracted, and proving that amazing musical productions can be made locally.

As this concert took place on the actual date of Verdis birthday, a cake bearing the composers iconic image, with 200 candles was wheeled out to the sound of Aidas Triumphal March to the delight of all the guests. Jean Alesi, one of the greatest Formula One drivers, was present at the event as his family has links to the Verdi family. He was invited with Giuseppe Aquila, CEO of Montegrappa, to cut the birthday cake. Each of the guests received a piece of the cake to take home with them at the end of the night. The concert featured performances of La Donna e Mobile the famous tenor aria from Rigoletto, and Brindisi, Libiamo, the famous song from La Traviata.

To complete the evening, the last song of the night was the iconic Va Pensiero, the well known chorus from the opera Nabucco in which the conductor invited the audience to participate. This was the song that Arturo Toscanini conducted at the great composers funeral in 1901 and was sung by a choir of 800 people to bid farewell to this giant of Italian culture. It is touching and fitting that the evening would end on this emotional note. The performers received a standing ovation lasting several minutes. The evening also included a silent auction, with the sale of a limited edition La Traviata pen in a frame signed by renowned international conductor, Valery Gergiev. The funds raised will be used to support musical education at the Rashid Paediatric Therapy Centre in Dubai.