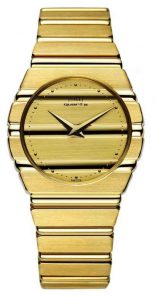 About the Piaget Polo range of wrist watches

In 1979, Piaget put a name on the face of timeless elegance: Piaget Polo. This watch conquered the fields in grand style. It celebrated time in an emotionally powerful case. Loyal to the precepts of fine watchmaking, it sported an instantly recognisable design thanks to the perfect integration of case and bracelet by means of subtly alternating polished godrons and satin-brushed surfaces. The jet set succumbed to its charm, and an icon was born.

Wearing a Piaget Polo reflects a certain art of living. The watch plays with its distinctive code features. Its design expresses an elegant interpretation of both an active and refined soul. Inspired from the polo world, this chic and dynamic universe echoes a time-honoured tradition as well as true nobility. 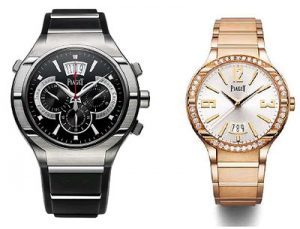 At the turn of the millennium, the Piaget Polo collection evolved. While the spirit remained the same, the shape took on softer lines inspired by a desire for enhanced comfort and character. The numerals and hour-markers broke free from previous restraints and the date was added to the list of indications so as to further accentuate precious moments. It was a case of giving a lighter touch to an enduring signature.

In 2009, the advent of the Piaget Polo FortyFive collection heralded a new chapter in the story of this icon. Sportier and featuring a titanium version with a rubber strap, it made a grand and striking entrance into a world of action and technical sophistication. This visually effective study in understatement is enlivened only by luminescent indexes and a red hand lending a touch of colour. In aesthetic terms, the legacy of the Piaget Polo was expressed through the smooth case and bracelet integration ensuring outstanding comfort in all circumstances.

In 2011, the design of these models is entirely in tune with the original spirit. The Piaget Polo on a gold bracelet has been treated to a subtle makeover, while the new versions of the Piaget Polo FortyFive jealously safeguard this unique, perfectly identifiable and iconic personality. 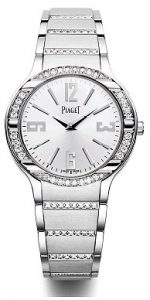 The integration of the case and bracelet – of which the profile curve has been accentuated to ensure exceptional comfort on the wrist – creates a fascinating depth effect. The new Piaget Polo on gold bracelet, studded in diamonds, comes in three versions: gem-set, partially gem-set, or pavé. The diamonds thus adorn the bezel, dial, bracelet, or all three at once.

As if to echo this expertise, the meticulous finishing details definitively rank this timepiece in a category of its own. The surfaces are polished or satin-brushed, while the Arabic numerals are interspersed with hour-markers and the personalised crown matches the design of the case and bracelet. The engraved P for Piaget asserts an authoritative presence on this quintessentially modern watch elegantly marking off precious moments with its pink or white gold dauphine hands gliding over a dial protected by a doomed sapphire crystal and framed by a cambered case and bezel.

These models are powered by three different movements, crafted in keeping with the finest traditions of the Manufacture de Horlogerie Piaget: the ladies’ models are equipped with Calibre 690P, and the men’s watches with two self-winding versions – Calibre 504P with date indication, and Calibre 534P. 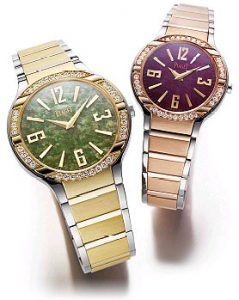 Bearing eloquent homage to its predecessors, the Piaget Polo reinterprets the spirit of the 1960s. It testifies to a type of expertise in gold manufacturing and hard stone dials that Piaget has been cultivating for over 50 years.

This is a watch with several faces that is both unique and richly different. It is inspired by the Piaget watches born in the effervescence of the 1960s, a period that has exercised a strong cultural influence. Building on the creative momentum of the 1960s, Piaget began designing precious watches featuring a blend of genres. Various models thus emerged combining two gold colours and hard stone dials. The result is a striking contrast enshrining a mixture of characteristics from a period that continues to inspire designers in creating watch models. A name that sounds like a style statement but which in fact denotes a free-spirited, original, vintage attitude. The Piaget Polo watch is all about that kind of audacity.

Appearing in either pink and white gold or yellow and white gold, the collection associates the nobility of hard stones with a broad colour
palette reflected in a dial sparkling with a wealth of nuances and exceptional depth.

Three hard stones offer a wealth of possibilities of standing out from the crowd and wearing a symbol. A glowing hard ruby with deep tones signifying passion, victory and love. A falcon’s eye with shimmering shades and reflections, evoking protection and social and intellectual success. And finally, jade, a philosophical stone carrying connotations of virtue, absolute power and a token of eternal life. 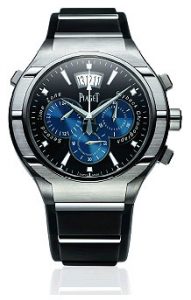 Forty-five is a highly symbolic number for Piaget. It’s the case diameter in millimetres. It’s the average length of a polo match in minutes. Piaget has always drawn inspiration from this noble and graceful sport to offer elegant, high-performing models with a decidedly modern touch. Right from its launch in 2009, the Piaget Polo FortyFive model in steel and titanium has set itself apart from the competition thanks to its charisma. Thanks to a dial featuring a colour variation, the Piaget chronograph enriches the collection with the subtle strength of nuances.

The deep blue counters make a perfect contrast with its black dial, resulting in a vividly colourful model with a powerful charm. At its heart beats Piaget Calibre 880P, the chronograph movement with flyback function designed, developed and produced by the Manufacture de Haute Horlogerie Piaget. In addition to the chronograph and flyback functions, it also displays the hours, minutes, small seconds at 6 o’clock, the date at 12 o’clock and a second time zone in 24-hour mode at 9 o’clock. Setting the finishing touch, its clasp with summer/winter comfort extension system ensures excellent flexibility in daily wear.

This ultra-thin 5.6 mm mechanical self-winding movement, equipped with two barrels and a large balance with screws, has a 50-hour power reserve in chronograph-activation mode. The latter function features a vertical coupling clutch and a column-wheel. The sapphire crystal fitted in the case-back reveals the movement and the black PVD treated oscillating weight specially developed for the Piaget Polo FortyFive model. 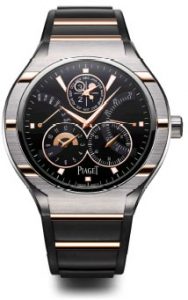 The Piaget Polo FortyFive in pink gold and titanium now combines the technical character of titanium with the warmth of pink gold. The deep black rubber strap is enhanced by pink gold gadroons, and the same shade of gleaming metal also lights up the bezel and dial. The dynamic appearance of this model is based on eminently masculine design codes and sophisticated technical characteristics.

For the second time, the Manufacture de Haute Horlogerie Piaget is equipping a model in this collection with a major complication: the perpetual calendar. The mechanical self-winding movement (Calibre 855P) is crafted in harmony with the finest watchmaking traditions.

The perpetual calendar, which embodies the mechanical programming of time, represents one of the major watchmaking achievements and is capable of keeping track of calendar irregularities until the year 2100. At just 5.6 mm thick, the ultra-thin Manufacture Piaget self-winding Calibre 855P was designed, developed and produced in the Manufacture de Haute Horlogerie Piaget.

It drives the hours, minutes, small seconds, retrograde day of the week and date displays, along with months and leap years – providing an original interpretation of the latter cycle by means of a hand featuring a circular open tip. 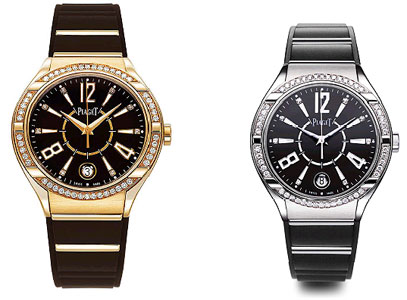 This feminine model offers a colourful approach expressed through two new dials: taupe grey and chocolate brown. To be worn in step with the seasons. In summer, allow the sun to linger lazily on the chocolate brown dial enhanced by luminescent pink gold numerals and hour-markers, and teamed with a rubber strap and pink gold gadroons. In winter, the subtle shades of taupe grey evoke a clear, crisp landscape complete with white gold gadroons on the strap. The luminous bezel is set with a sparkling row of diamonds – while the same gemstones strike up a lively, head-spinning dance on the hour-markers.

These models are pervaded by the line’s distinctive characteristics: perfect integration of case and wristband, polished pink or white gadroons on the rubber strap, cambered case and bezel, a crown personalised with the letter P, the Piaget coat-of-arms engraved on the case-back – the signature of an historical model that has been redesigned by the brand. Water-resistant to 50 metres, the watch is equally at ease in the sports world, where it excels, as in the office where its generous size confers a resolutely modern touch. It treats the woman wearing it to a blend of subtle charm and delightful nuances, while radiating an eminently contemporary aura of elegance.

In 1979, Piaget expressed its commitment to creativity in dreaming up the Piaget Polo collection.

In 2011, the Manufacture de Haute Horlogerie is pursuing this path in the service of this timeless collection that conveys an enduring frame of mind and an authentic lifestyle.