IWC Schaffhausen gets off to a powerful start in 2012: the year of the Pilot’s Watch. With five new models, the TOP GUN collection establishes itself as an independent formation within the IWC Pilot’s Watch family. The year’s high-flyer is the TOP GUN Miramar: a tribute to the place in California where the myth of the elite pilots was born. And two Pilot’s Watches featuring many of fine watchmaking’s greatest achievements prepare for take off: the Big Pilot’s Watch Perpetual Calendar TOP GUN and the Spitfire Perpetual Calendar Digital Date-Month. 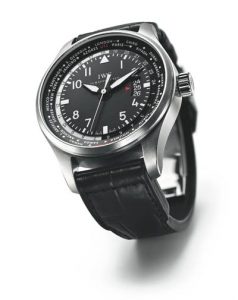 “For the new TOP GUN Pilot’s Watches we drew on our long tradition of manufacturing unusual deck watches. In the 1940s, Pilot’s Watches made in Schaffhausen were widely used as socalled B watches for flight navigation,” explains Georges Kern, CEO of IWC Schaffhausen. “Back then, only wristwatches with the highest possible precision were good enough for navigators: the pilot and his crew would synchronize their watches to the navigator’s.” Since the main priority for navigation is optimum legibility of the seconds and minutes, these two were often the only indicators shown on the outer ring; the hours would be relatively small and appeared on a central ring. This particular detail inspired IWC’s designers to display the hour circle and the chapter ring separately on the dials of the Big Pilot’s Watch TOP GUN Miramar and the Pilot’s Watch Chronograph TOP GUN Miramar. “The process of retracing the historic roots of our Pilot’s Watches gave us the idea of using the Miramar to create our first line with a militarystyle design,” adds Christian Knoop, Creative Director at IWC.

“This allows us to combine various styles in an imaginative way – even with luxury elements, if we wish. That’s one of the reasons the new Miramar line is such a perfect fit for IWC: premium-class watches with outstanding mechanics and a rugged, almost hardedged feel.”

The dark, metallic sheen of the grey ceramic case and the matte anthracite of the dial all waken associations with precision instruments used in aviation. The use of specific camouflage colours such as beige for the hands and chapter ring, together with green for the strap, underscore the desired look. The textile strap leans visibly on the tough webbing belts. It is complemented by two high-tech materials, typical for TOP GUN, that were introduced to watchmaking by IWC as early as the 1980s: zirconium oxide for the case, along with titanium for the controls and the watch back. Both the Miramar models – like the entire TOP GUN collection, incidentally – are equipped with IWC-manufactured calibres. Like the other Big Pilot’s Watch, the Big Pilot’sWatch TOP GUN Miramar is equipped with the largest automatic movement made by IWC, with a power reserve of 168 hours. This also explains the 48-millimetre case diameter. The calibre 89365 found in the Pilot’s Watch Chronograph TOP GUN Miramar is one of the most advanced and robust chronograph movements ever produced. It has a flyback function as well as an analogue display for stopped minutes and seconds.

Commenting on the family’s positioning in the international watch market, Karoline Huber, Director Marketing & Communications at IWC, explains: “Flying enthusiasts all over the world think of Miramar in California as the birth place of the Top Gun legend. With our new TOP GUN Miramar design line, we are addressing watch lovers who consciously embrace IWC’s long-standing tradition of manufacturing Pilot’s Watches but who also wish to benefit from the technological advances of the 21st century and the inimitable quality typical of IWC.”

Classic TOP GUN collection: black and white with red highlights
The TOP GUN edition has held a permanent place in IWC Pilot’s Watches collection since 2007. The elaborately equipped Big Pilot’s Watch Perpetual Calendar TOP GUN comes with a host of advanced features, including a perpetual calendar with its four-digit year display, moon phase display and seven-day power reserve. The Big Pilot’s Watch TOP GUN unites the clear-cut instrument look of the 1940s with ultra-modern watch technology. The tiny aircraft silhouette on the seconds hand creates an eye-catching signal-red highlight on the blackand-white dial. The Pilot’s Watch Chronograph TOP GUN, which comes with a flyback function and protection against magnetic fields, is also equipped with an IWC-manufactured movement. 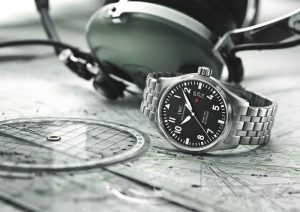 In 2003, IWC Schaffhausen launched a Pilot’s Watch line that took not only its name from the Spitfire but also reflected the elegance and outstanding technology of the legendary singlepropeller aircraft. Now, the designers and technicians have subjected the Spitfire watches to a thorough general overhaul. With a streamlined design and new features, they remain firmly on course for success. All the latest models are fitted with IWC-manufactured calibres. The gold and stainless-steel cases are meticulously machined by hand; the result is a vibrant interplay of shiny, silky matte and structured surfaces. The sun-pattern finish gives the slate-coloured dial a metallic sheen that optically references its namesake. The Spitfire Perpetual Calendar Digital Date-Month in its red gold case combines tasteful design with the art of watchmaking at its finest. It is the first IWC Pilot’s Watch to show the date and month digitally in the form of four large numerals; in visual terms, it goes perfectly with the instrument appearance and revives the tradition of the Pallweber system, now dating back well over 100 years. The Spitfire Chronograph with its IWC-manufactured 89365 calibre is available in red gold and stainless steel. With its vertically arranged numerals, the date window is an unmistakable sign that the engineers had the shape of an altimeter in mind when they designed it. The metal bracelet supplied with Reference 387804, is fitted with a newly developed fine-adjustment mechanism. Simply pressing the IWC button in the folding clasp lengthens the bracelet; to shorten it, the bracelet is pushed together until it is the correct length. Both the pin buckle and folding clasp are slightly bolder, in order to match the larger case diameter.

Classic Pilot’s Watches – slightly modified
The Pilot’s Watches made by IWC in the 1930s and 1940s established a legend that lives on in the classic Pilot’s Watches family. The most conspicuous change compared to their predecessors – with the exception of the Big Pilot’s Watch is the vertical triple date display at “3 o’clock”, whose form underscores the cockpit-style design more emphatically. In 2012, the Big Pilot’s Watch will appear with its familiar looks as well as the highly efficient IWC-manufactured 51111-calibre movement. Compared with its predecessor, the Mark XVI, the Pilot’s Watch Mark XVII is 2 millimetres larger at 41 millimetres. With its new red design features, the dial of the Pilot’s Watch Double Chronograph is even more attractive, and thanks to a larger case diameter – now 46 millimetres – it is also significantly more legible. The stainless-steel case of the Pilot’s Watch Chronograph has increased by a moderate 1 millimetre to 43 millimetres. The new Pilot’s Watch Worldtimer has a 24-hour ring that enables the wearer to look at all 24 time zones, including the Universal Time Coordinated (UTC). The city ring shows the names of 23 places around the globe, each of which represents a time zone. The dial shows local time, which can be adjusted forwards or backwards in one-hour steps – also when crossing the International Date Line.

“It is with pride and confidence that IWC looks forward to 2012, our year of the Pilot’s Watch. We have six exciting new models, including two Perpetual Calendar models, with some of the most complex watchmaking features imaginable, the new Miramar design line and the new-look Spitfire collection,” sums up Georges Kern. 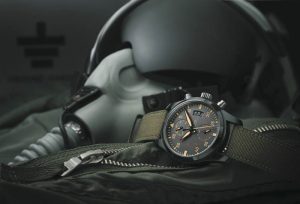 The Schaffhausen-based watch manufacturer IWC has been making rugged and reliable timepieces for pilots and their passengers since the mid-1930s. Right from the start, IWC Pilot’s Watches were designed to offer optimum legibility by day and night and established the look of an instrument: a look that has since determined the appearance of this special breed of watches, to this day. The IWC Special Pilot’s Watch, launched in 1936, stood out with a distinctive black dial that was set off by striking luminescent hands and large luminescent numerals. Outstanding technical features of the IWC Special Pilot’s Watch included a shockprotected balance wheel bearing and a nonmagnetic escapement. With its 55-millimetre diameter, the Big Pilot’s Watch 52 T. S. C. of 1940 is the biggest wristwatch IWC Schaffhausen has ever manufactured. As a deck watch it featured, among other things, a central hacking seconds to enable pilots and navigators to synchronize their watches with down-to-the-second precision. An extra-long leather strap also meant that it could be fastened around a flight suit. The clearly arranged dial was a perfect example of reductionism: a style cue and a paragon for all classic Pilot’s Watches. The Mark 11, with its hand-wound 89calibre, manufactured from 1948 onwards for the Royal Air Force, established itself as the best-known IWC Pilot’s Watch of them all. Its movement was enclosed in a softiron inner case to shield the mechanism from magnetic fields. The Mark 11 was used successfully by the Royal Air Force for over 30 years.

IWC Schaffhausen
With a clear focus on technology and development, the Swiss watch manufacturer IWC Schaffhausen has been producing watches of lasting value since 1868. The company has gained an international reputation based on a passion for innovative solutions and technical ingenuity. One of the world’s leading brands in the luxury watch segment, IWC crafts masterpieces of Haute Horlogerie at its finest, combining supreme precision with exclusive design.