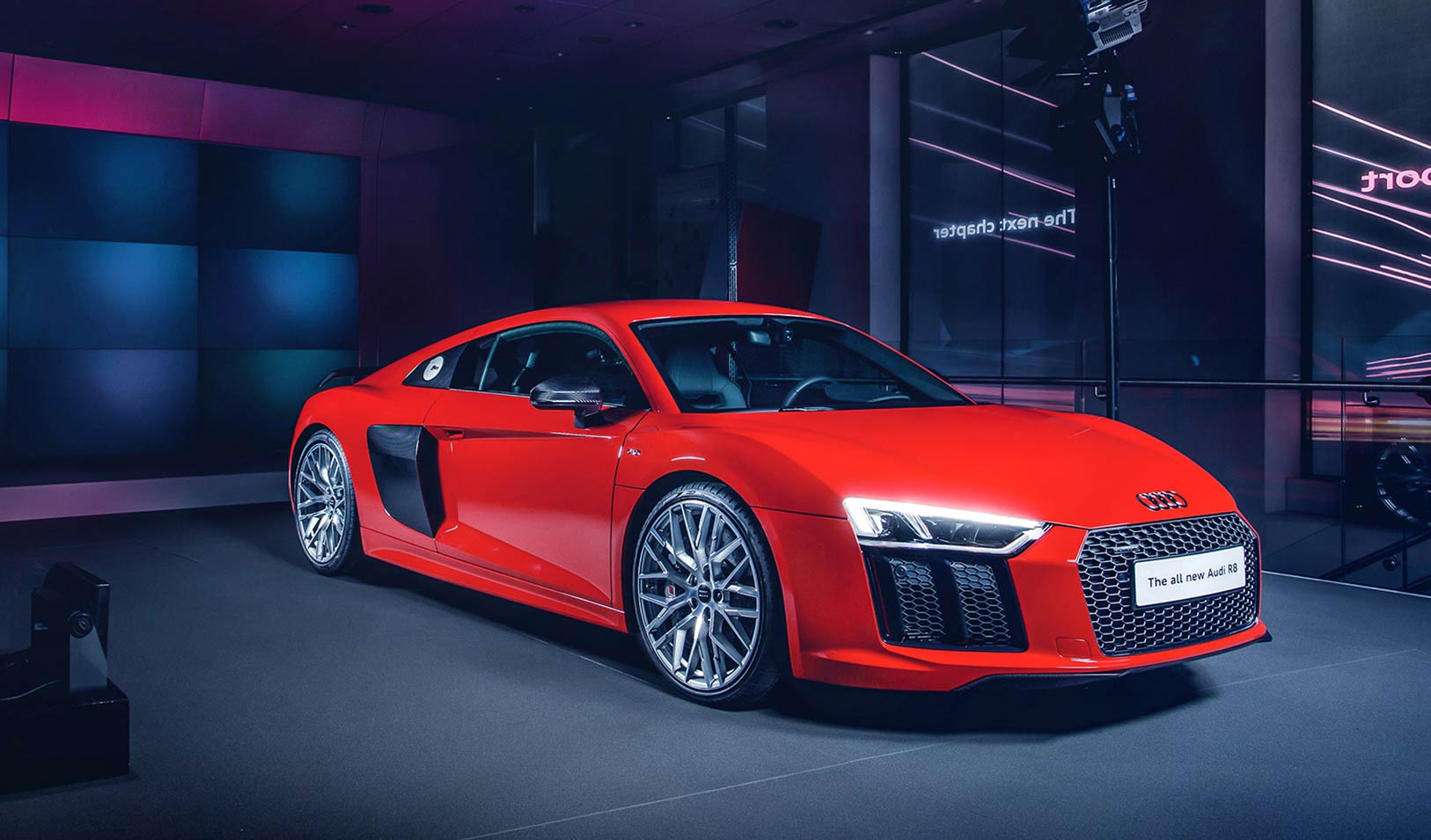 Just days after the global premiere of the all-new Audi R8 at the Geneva Motor Show, potential customers in the UK can delve a little deeper into the detail behind the epic supercar now that pricing and specification have been confirmed by Audi UK.

Power for the second generation line-up will be provided exclusively by a ten-cylinder FSI engine delivering 540PS in the ‘standard’ version and a mighty 610PS in the ‘Plus’ model – notable as the fastest and most powerful series production Audi in history. When they become available to order in May the R8 V10 will be priced at £119,500 OTR and the R8 V10 Plus at £137,500 OTR. 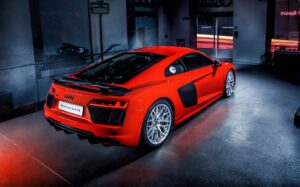 As befits the dynamic spearhead of the Audi range the latest R8 will feature an exceptional specification. It starts externally with all-LED headlamps and LED tail lamps incorporating dynamic rear indicators with a scrolling function in the intended turn direction. In the V10 plus version the headlights are further enhanced by front dynamic indicators and laser spots for the high beams as standard, giving an extended field of vision and increased brightness, and by a high beam assist function for automatic alternation between low and high beam settings.

Both versions will be fitted with 19-inch wheels in exclusive designs as standard, and in the V10 Plus these are combined as standard with ceramic brake discs offering even more assured stopping power. For the first time R8 V10 plus customers will also have the option to upgrade to a 20-inch wheel. Naturally, each model is fitted with the latest-generation quattro all-wheel drive, which utilises an electrohydraulic multi-plate clutch capable of sending up to 100 percent of torque to the front or rear axle depending on driving conditions. 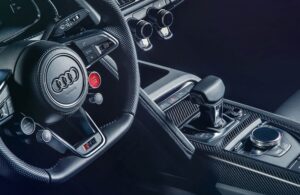 Inside, Fine Nappa Leather-upholstered sports seats with electric adjustment for V10 models and sculpted bucket seats for the V10 plus will position the driver perfectly in relation to the new multi-function plus steering wheel and the Audi virtual cockpit, both of which make their R8 debut here. In the R8 V10 the new flat-bottomed steering wheel facilitates control of all the information and entertainment functions offered by the virtual cockpit, and also houses two ‘satellites’ incorporating the control buttons for the Audi drive select system and engine start-stop function, both of which are also new to the R8.

The Performance steering wheel in the Audi R8 V10 plus features two more satellites. One houses a button controlling the exhaust system’s sound-altering adjustable flaps, and the other the activation switch for the ‘performance mode’ which is standard for this version and optional for the V10, along with a rotary wheel enabling selection of this mode’s individual ‘dry’, ‘wet’ and ‘snow’ programs. These programs support dynamic handling on dry, wet and snow-covered surfaces, making use of the ESC stabilisation control function.

The Audi virtual cockpit is set in a free-standing housing and presents all the information on its 12.3-inch display with elaborate and pin sharp graphics. The driver can toggle between different display modes and also adjust the digital instrument cluster to suit in individual mode. In performance mode, the driver is presented with information on the driving programs, acceleration, deceleration and lateral forces as well as power and torque. The Audi virtual cockpit also displays a shift light which illuminates when the rev limit has been reached.

The driver operates the Audi virtual cockpit using the multifunction plus steering wheel, meaning there is no need to remove a hand from the steering wheel. Alternatively, operation is also possible via the touch wheel or the buttons in the centre console. 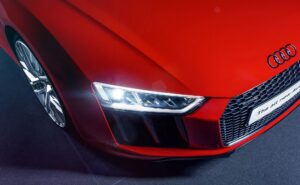 Even more of the potential opened up by the state-of-the-art virtual cockpit can be enjoyed by going online in the new Audi R8 – the Audi connect interface is standard, and enables occupants to connect a smartphone or tablet via the system’s integrated Wi-Fi hotspot, and to make use of tailored online services from Audi connect delivered via the fast LTE (Long Term Evolution) network. MMI navigation plus is also standard, and is augmented by the MMI touch wheel with its fingertip-sensitive touch pad enabling easy ‘written’ entry of data into the system.

On the outside, the V10 is equipped with an electrically extending spoiler, while the R8 V10 plus gains a large fixed rear wing in carbon sigma, matching the finish of its heated and folding exterior mirrors, sideblades, front spoiler lip and rear diffuser.

Further standard items include the front and rear parking assist system and light and rain sensors. To add visual impact to the other more immediately evident attributes of the sonorous mid-mounted 10-cylinder engine, both 540PS and 610 PS versions also feature an interior LED lighting package which illuminates the glass-covered engine compartment and the footwells.

The extensive list of options available for the new R8 features enhancements that further enrich the driving experience, including the sports exhaust, the magnetic ride adaptive damping system, laser spotlights for the all-LED headlights in 540PS versions (standard for the V10 plus) and bucket seats (also standard for V10 plus), as well as indulgences such as stunning 20-inch alloy wheels and a 500-watt Bang & Olufsen audio system. Numerous interior decor upgrades and colour combinations for the body and sideblades can also be added to create a uniquely personal R8.

All new R8 drivers will also receive a complimentary Audi Driving Experience at Silverstone. This full day training session will help owners to develop an intimate understanding of the car’s dynamics in the relative safety of the world famous Stowe and Grand Prix circuits. 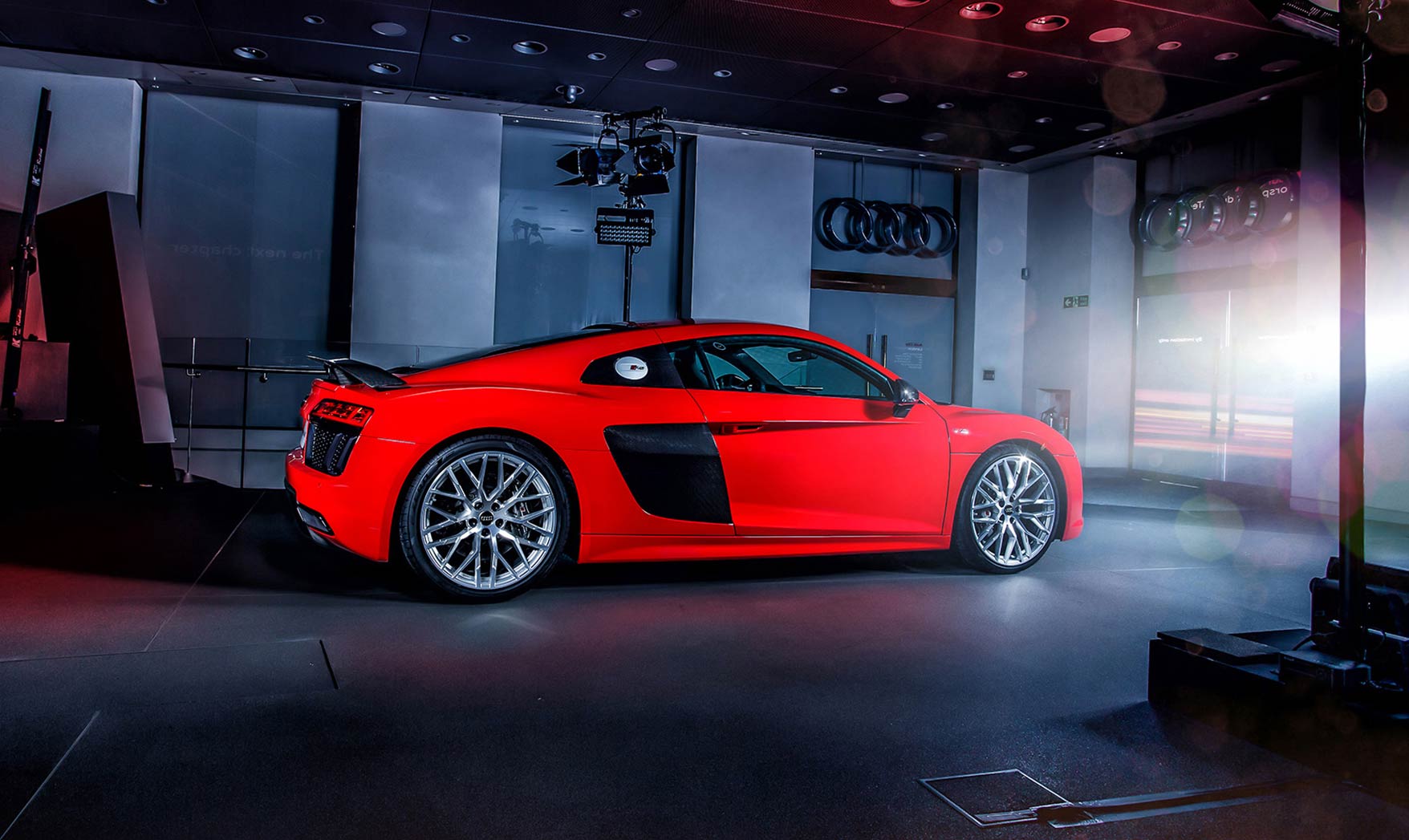