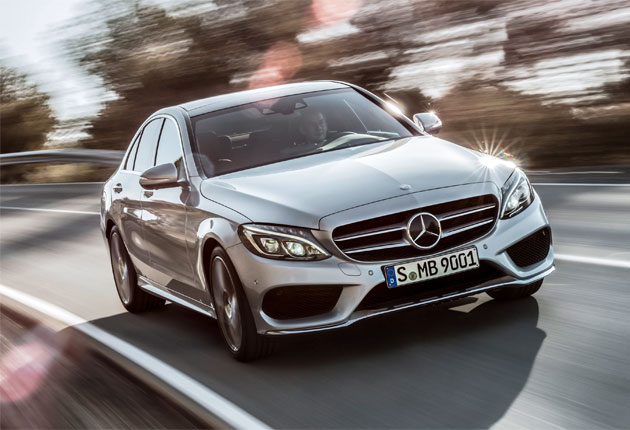 The new Mercedes-Benz C-Class range has been unveiled with a new lightweight design, improved aerodynamics and new economical engines.

The C-Class is the top-selling model in the Mercedes-Benz vaunted and extensive range. The previous incarnation of the C-Class (launched back in 2007) notched up a whopping 2.4 million sales worldwide. For this model, Mercedes have taken into account that the world population (is in the main) getting taller. To compensate for this, the new C-Class is not only 3.7 inches longer at (184 inches), it is also 1.6 inches wider at almost exactly six feet. This greater size provides additional space for rear passengers and more storage space in the boot.

The new C-Class has a striking, dynamic design that (‘designer speak’ coming) has taken inspiration from nature, evident in the new sedan’s aesthetically sensuous lines and surfaces. The clearly defined surfaces deliberately display a degree of tension, lending them a muscular and sensuous character. Precise lines and sculptural surfaces create lively light and shade effects. Excuse the foray into unecessary verbosity, ‘designer speak’ is something that is as alien to us as a foreign language, let’s just say that it looks very nice, sporty and sleek.

We know that the mechanics, safety are going to be top notch with an abundance of technology and gadgets to enhance one’s journey, so rather than take you down the technical specification route, we will be concentrating on the looks and interior comfort for this article. 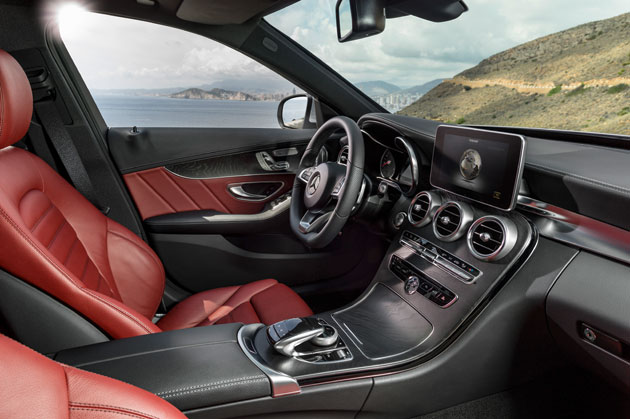 The Mercedes-Benz designers have styled the interior to a very high level using carefully chosen high-class materials which are pleasant touch. The driver and front passenger enjoy plenty of space and luxury in a discreet, modern guise on board the new C-Class. This gives rise to a feel-good atmosphere which is new to this class of vehicle – settling into your seat in the C-Class is akin to the uplifting feeling of being upgraded from economy to business class on an airplane.

A large one-piece center console panel performs an elegant sweep from the center air vents to the armrest. These seamless clear-cut lines create a sense of open space and convey a thrillingly purist and modern feel. A centrally positioned free-standing central display is the main eye-catching feature across the center console – with a screen diagonal of 7 inches or 8.4 inches if Multimedia Package with the COMAND Infotainment System is selected.

Five round air vents lend the dashboard a sporty touch. With their metallic cool-touch effect they create a fascinating, tangible contrast to the warm look of the other materials – such as the wood in the center console or the MB-TEX on the dashboard. The “upgrade” feel duly continues with the controls. All switches feature a high-quality, three-dimensional design befitting a luxury vehicle and benefit from a clear layout.

The innovative touchpad in the handrest over the Controller on the center tunnel marks a further evolutionary step developed in-house at Mercedes-Benz. As on a smartphone, this provides for very simple and intuitive operation of all the head-unit functions using finger gestures. The touchpad also permits letters, numbers and special characters to be entered in handwriting – in any language. The user receives clear haptic feedback when operating the touchpad’s control surface, which is highly conducive to genuine intuitive use.

A head-up display is also new to the C-Class. Like in a jet fighter, it displays important information directly in the driver’s field of vision on the front windscreen, thus providing for clear legibility and ensuring that the driver is distracted less from the road ahead. The system provides information on vehicle speed, speed limits and navigation instructions and displays messages from DISTRONIC PLUS.

Summary of the new Mercedes-Benz C-Class

The German automotive giant have done an excellent job with the new C-Class. First and foremost it looks good and will not be mistaken for anything other than a Mercedes-Benz. This sleek, pretty looking car will attract admiring glances while you sit inside the luxury, technology packed interior and with a huge fan base this incarnation of the C-Class is sure to continue the massive sales trend set by the previous model.