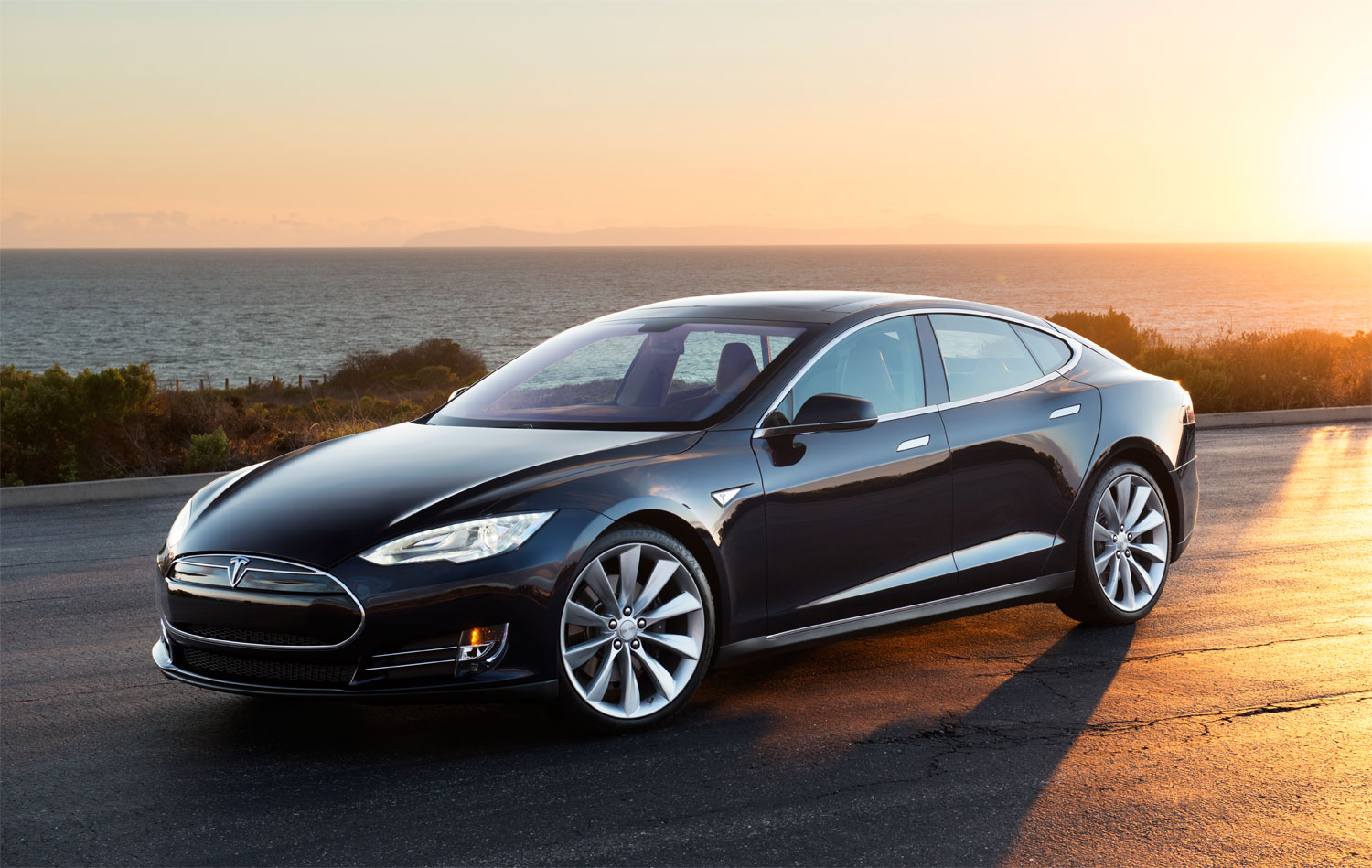 In the third part of Jon McKnight’s exclusive report for Luxurious Magazine, our resident Bon Viveur gets under the bonnet of the Tesla Model S – literally – and reveals why Elon Musk’s creation is one of the most important technological breakthroughs of the 21st Century.

If everyone drove a Tesla, the oil companies and their filling stations (gasoline stations in the US) would go out of business overnight. We simply wouldn’t need them. And if that didn’t make a difference to climate change, nothing would. To celebrate that happy thought, I drove to my local filling station at night, pulled up at the pumps and, not having a pack of hyenas to hand, produced a toy monkey to laugh at the filling station in defiance of the oil industry that’s been ripping us off for years. You can see how I got on in the Tesla Model S test-drive video at the end of this article. And I’m guessing here, but the one set of people who won’t be laughing at the thought are the oil industry owners and their cronies, who’d be horrified if we all drove a Tesla. But unless the rest of the automotive industry wakes up and takes up Tesla on its offer to share its technology – an offer unprecedented in commercial history – the oil barons will still have a huge market to exploit along with the planet that provides their fossil-fuelled fortunes. 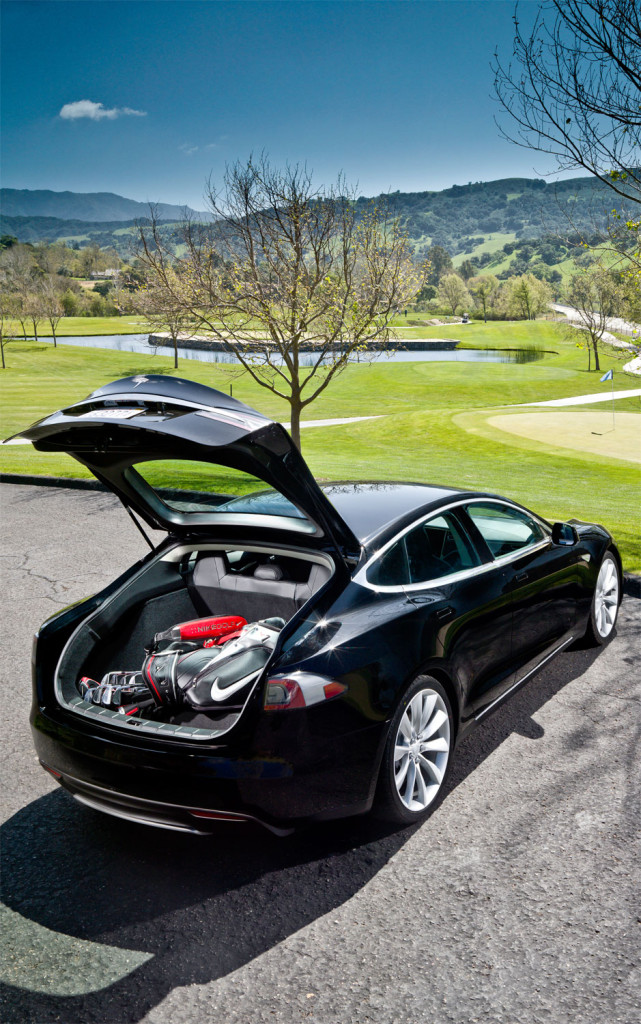 I couldn’t help thinking that the prospect of everyone driving Teslas must be deeply concerning to some parts of the green lobby who won’t be happy until they’ve turned the clock back and we’re all living in Thomas Hardy’s time, clip-clopping along on horses and carts and rarely venturing from our villages for fear of damaging the planet. What would they do if we abolished the internal combustion engine and all drove Teslas, or Tesla-powered cars? How would they stop us having fun then? It might grieve them to know that while the Tesla is environmentally virtuous in producing no emissions (it doesn’t even have an exhaust pipe!), it’s also amazingly exhilarating to drive, and you can whizz about, hurtle round bends and accelerate to a hundred miles an hour (or so I’m told) quicker than they can splutter the words “brown bread”, “sandals”, and “environmentally sustainable forms of transport”.

“But ah,” they’ll say, “you still need to generate the electricity you use to recharge the Tesla, whether it’s at home in your garage or at a public Supercharger, so you’re just pushing the problem back to the generating end.”

Crushingly for them, again, Elon Musk has thought of that.

He’s arranged for all the electricity used in Superchargers to be generated using solar power, and the system will produce more power than the cars use in a year, meaning a net gain for the environment. Or, as Mr Musk put it himself: “You can travel for free, forever, on pure sunlight. It’s pretty hard to beat that.” It’s the sort of line that snake-oil salesman would have sold their grandmothers for years ago, if they hadn’t already disposed of them in a lease-back deal, that is, but Elon Musk’s claim happens to be true. So we can really drive off until we’re truly far from the madding crowd, without actually having to live in the penurious and miserable conditions that Thomas Hardy did so much to draw the reading public’s attention to.

And even when you’re far from your marvellous car, you can still be in control of it.

Tesla have an app that runs on the iPhone and allows you to lock the car, sound the horn, flash the lights, see at a glance how much charge it has and how far it will go, and even find your car if you can’t remember where you parked it! And you can do all that from anywhere you can get a phone signal, even if it’s on the other side of the world, though it’s most likely to be useful when you’re at home and you want to put on the heater on a cold morning or switch on the climate control if it’s a scorcher. While the Tesla may be no BMW i8 to look at, it turned heads everywhere I went, and there wasn’t a single time when I parked in a public place without at least one person coming up to me to ask what the car was and what I thought of it – something I’ve only ever experienced once before when I test-drove a Lotus Esprit Turbo in the Eighties.

The Tesla Model S also offers a bit of a challenge for engine-spotters.

The floorpan is absolutely flat, with no transmission tunnel to compromise leg-room, there’s a capacious boot, and, surprisingly, there’s also a reasonably cavernous space under the bonnet. In the hope of finding the elusive engine, and purely in the interests of research, I opened the bonnet, squeezed myself into the space under it, and arranged for a friend to shut me in. I intended to let myself out using the emergency bonnet-release so that I could emerge from my search and do a piece to camera for the Tesla Model S road-test video that complements this review – but, unfortunately, I couldn’t push the bonnet up from inside and had to summon help from some rather surprised passers-by. Take Two went better, and I went home, relieved to have got the sequence in the can, only to discover that the person who shut me in could just be seen disappearing out of shot as I began to emerge. So I had to go through the whole ordeal again the next morning, this time with Alan Jeffery (yes, the engine tuner) shutting me in and standing by to release me if anything went wrong. It’s at times like that that you find out who your friends are!

A serious word of advice: don’t try that at home, because you have to get into a foetal position to fit under the bonnet, and trying to fiddle with the release catch with your hand behind your back in a sweltering, airless compartment is not quite the sort of user experience that Elon Musk had in mind when he created the car. And yet someone at Tesla must have foreseen just such an event, as there’d be no point fitting an emergency bonnet-release catch inside the bonnet cavity unless there was a possibility that some idiot might one day be in there in order to operate it! 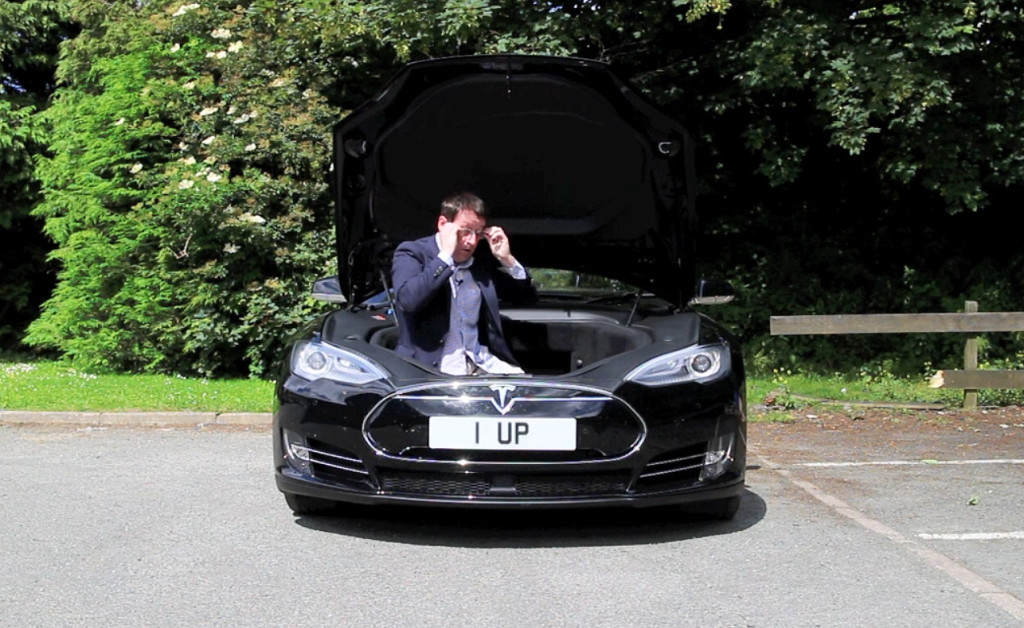 Conditions under the bonnet are a complete contrast to the experience of travelling in the Tesla in the conventional manner – if one can use the word “conventional” at all when talking Tesla. For while it’s cramped, airless and claustrophobic under the bonnet, the interior of the car is spacious, extremely comfortable and designed for real human beings. Everything’s intended to make your experience easier and more enjoyable, with the established luxury car toys of electronically-adjustable seats and mirrors with memories that reposition them automatically to your liking if you take turns at driving. Unlike my emergence from the bonnet cavity when I looked and felt dishevelled, hot and flustered – as captured on camera – I stepped out of the cockpit after driving a couple of hundred miles and felt fresh as a daisy, as did my passengers.

But while Tesla have cracked the biggest problem ever in the world of electric cars – range anxiety – I found myself suffering from a new condition, Tesla Deprivation Syndrome, when the time approached to give it back. My offer to become a Tesla Ambassador in return for a free one remained inexplicably unanswered, and I even went so far as to rename the vehicle Jon Bon Viveur’s Tesla on the iPhone app in the hope they’d recognise a man in love and let me keep it. I’d also taken the precaution of trying, yet again, to acquire one via Best Of The Best, the company that made its name by parking supercars near the Duty-Free at airports and inviting people to win them, and has only increased the temptation by running a weekly spot-the-ball-and-win-a-supercar competition through its website .

So when my iPhone rang with an unfamiliar number on the day the car was due to be collected, it was either going to be William Hindmarch, the very personable CEO of Best Of The Best, telling me I’d finally won a Tesla or, as proved to be the case, it was the delivery driver who was coming to take mine away. As he winched my Tesla up into his transporter, each tug on the wire was like a tug on my heart as the car I had fallen in love with and enjoyed a six-day fling with vanished inch by inch out of my life. Elon Musk has promised to slash the price of the Tesla as he makes more of them, so perhaps there’s hope, but in the meantime you’ll need £59,000 for the basic Tesla Model S 85 or £78,880 for the one I drove which included umpteen options. If you do have that sort of money to spend on a car, tell Tesla I sent you.

It’s the most interesting and exciting car I’ve ever driven – by a million emission-free miles – and whether you buy one to help save the planet or just for the sheer joy and cachet of owning the most remarkable car of the century, be warned that there is just one little thing it lacks: a smugness control.