Since it was launched more than half a century ago, the OMEGA Speedmaster has defined the classic chronograph. It is rugged and reliable and has a timeless design. And since the day in July 1969 that it was first worn on the lunar surface, it has been known by its nickname, the Moonwatch.

This year, an innovative new member of the family is being introduced, equipped with the OMEGA Co-Axial calibre 9300 – the Speedmaster OMEGA Co-Axial Chronograph. While it shares some core elements with the original Speedmaster Professional – the black dial, the Moonwatch-style hands and the familiar black tachymeter on the bezel – it also has some distinguishing features that will attract an even wider audience to the world’s favourite chronograph.

The Speedmaster OMEGA Co-Axial Chronograph has a 44.25 mm case in the classic stainless steel that has always been associated with the Speedmaster Professional. This model has a bevelled black dial with white transferred elements and varnished white hands. It is offered on a black leather strap or a stainless steel bracelet.

Only two sub-dials
The dial has two sub-dials instead of the three normally associated with Speedmaster. This is made possible by the innovative placement of the 12-hour and 60-minute counters in the same sub-dial at 3 o’clock allowing a comfortable and intuitive chronograph reading.

The Speedmaster OMEGA Co-Axial Chronograph’s elegant, slim body is the result of a unique design concept: it has a box-form scratch-resistant sapphire crystal not only on the front of the watch but also on the polished screw-in caseback. The latter, with anti-reflective treatment, reveals perfectly the beauty of the movement. 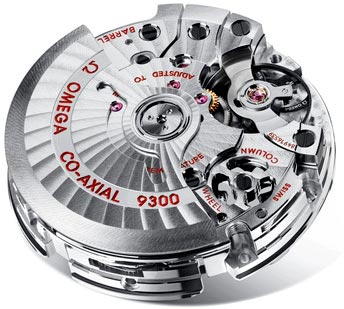 The innovative column-wheel chronograph has 12-hour and 60-minute counter hands placed on the same subdial at 3 o’clock. This familiar arrangement of the hands, which recalls the hour and minute hands on the main dial, enables intuitive reading of the chronograph. It also has a central chronograph seconds hand and a small seconds hand on the sub-dial at 9 o’clock.

The two chronograph control pushers function totally independently – accordingly, there is no risk to the chronograph mechanism as a result of inadvertent manipulation.

The Speedmaster OMEGA Co-Axial Chronograph is a welcome addition to the great Speedmaster family. With its innovative movement and its legendary family name, it will find an enthusiastic following among Speedmaster fans who want to combine the impressive legacy of an iconic chronograph with the best series-produced mechanical watch movement in the world.