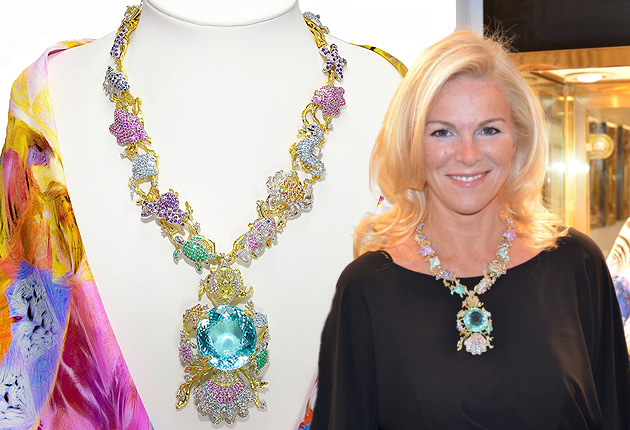 The Paraiba Star of the Ocean Jewels Necklace features as its center stone the world’s largest Paraiba Tourmaline – a natural treasure of historical importance.

This majestic 191.87 cts. gemstone is certified by Guinness World Records as the largest cut Paraiba tourmaline on the planet. The flawless 191.87 carats Paraiba tourmaline has been placed by experts in the field amongst the world’s rarest gems, including: the Logan Sapphire, the Hope Diamond, the Alan Caplan Ruby and the Golden Jubilee.

Mr. Vincent Boucher, Canadian financier, physicist, artist and President of Billionaire Business Enterprises Inc., first introduced this stone to the market in 2009. His passion for world-class gems, and his desire to collaborate with a reputable and renowned design house, brought Mr. Boucher to Kaufmann de Suisse to create a handmade objet d’ art in which to present this significant gemstone.

The characteristics of the tourmaline category include a wide range of colors, and the word “rainbow” is often used to describe this group. Tourmaline crystals showing only one fancy color however, are quite rare, regardless of size. For Paraiba tourmalines, the traces of copper, gold and manganese are what differentiate it from other tourmalines and give it an incandescent neon-like color and inner glow.

Discovered in 1987 at the Batalha mine in the Brazilian state of Paraiba, this particular type of tourmaline is found only in a handful of places on earth, and often the crystals are broken, etched or heavily included and a flawless stone with a weight of 3 cts. is extraordinary. To illustrate the rarity of this gem – for every 10,000 carats of diamonds mined, there was only 1 ct. of Paraiba tourmaline mined, and don’t forget, mines have been empty since 2008. Additionally, only 50 kilograms have been mined in the entire world.

Moneca Kaufmann, of Kaufmann de Suisse jewellers was given the rare opportunity to design this piece to showcase a world-class gem, and her personal inspiration was the result of living in Palm Beach, Florida for the past few winters and becoming grateful and enamored with the beauty, strength and majesty of the sea.

The elaborate composition is a celebration of the unfathomable grand design and interdependent nature of our planet, an appeal to respect, protect and to care for each other. Each individual creature she chose was sculpted by hand to lie upon the delicate coral branches from which it finds shelter and sustenance. Multicolor precious and semi-precious stones are embedded into each sea creature, and include: pink, blue, yellow and orange sapphires, emerald, ruby, blue topaz, amethyst, tsavorite, rubellite garnet and diamonds. The total number of stones is 1,706 including one brilliant yellow canary 10.73 cts. diamond, and of course the dazzling and delicious Paraiba tourmaline. The exquisite yellow diamond is poised beneath the necklace as though a brilliant moon in orbit around the transparent blue planet beneath. And then, the raison d’être, the core, 191.87 cts Paraiba tourmaline, hangs delicately in balance – the perfect marriage of form and substance, art and science.