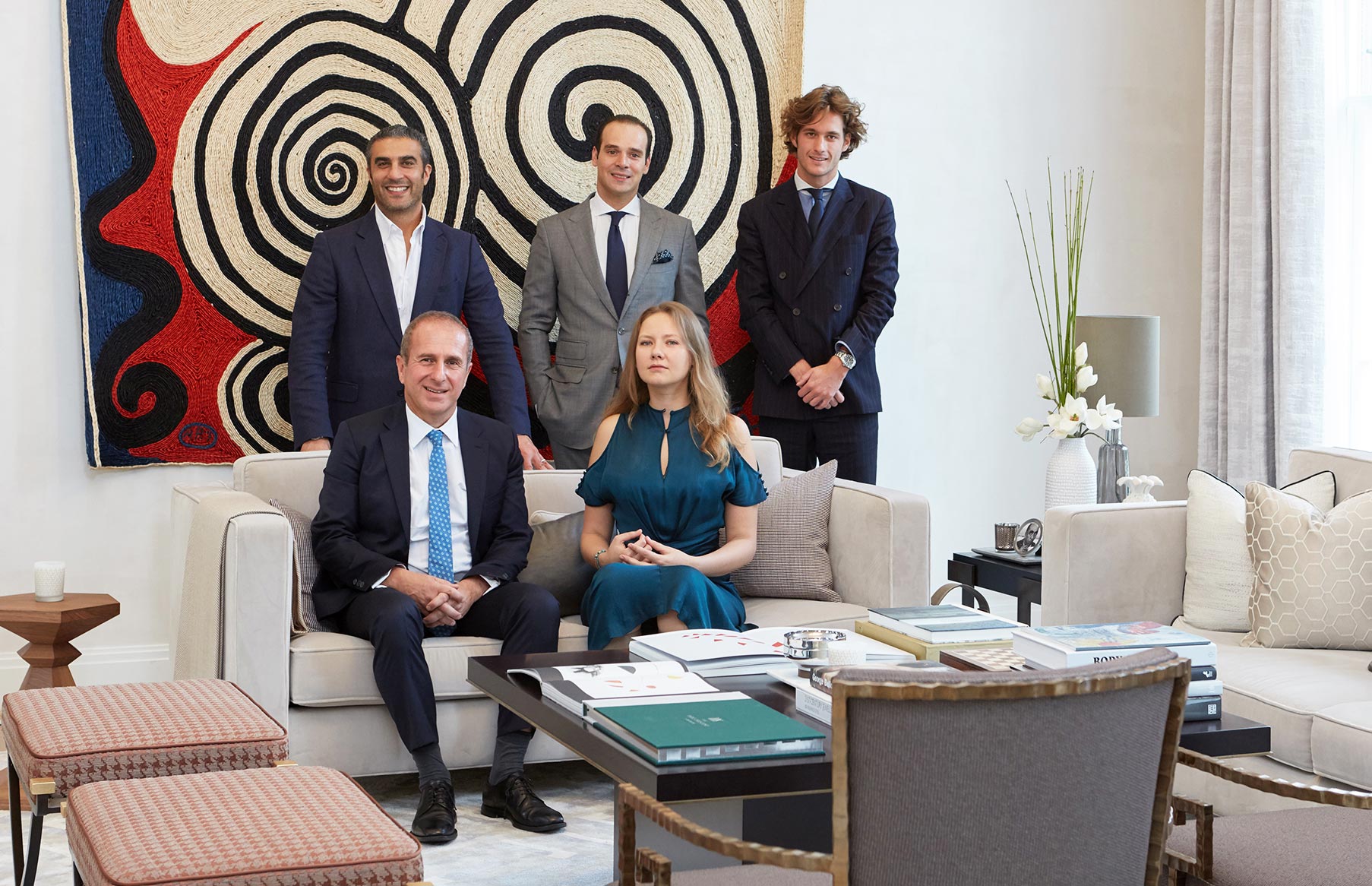 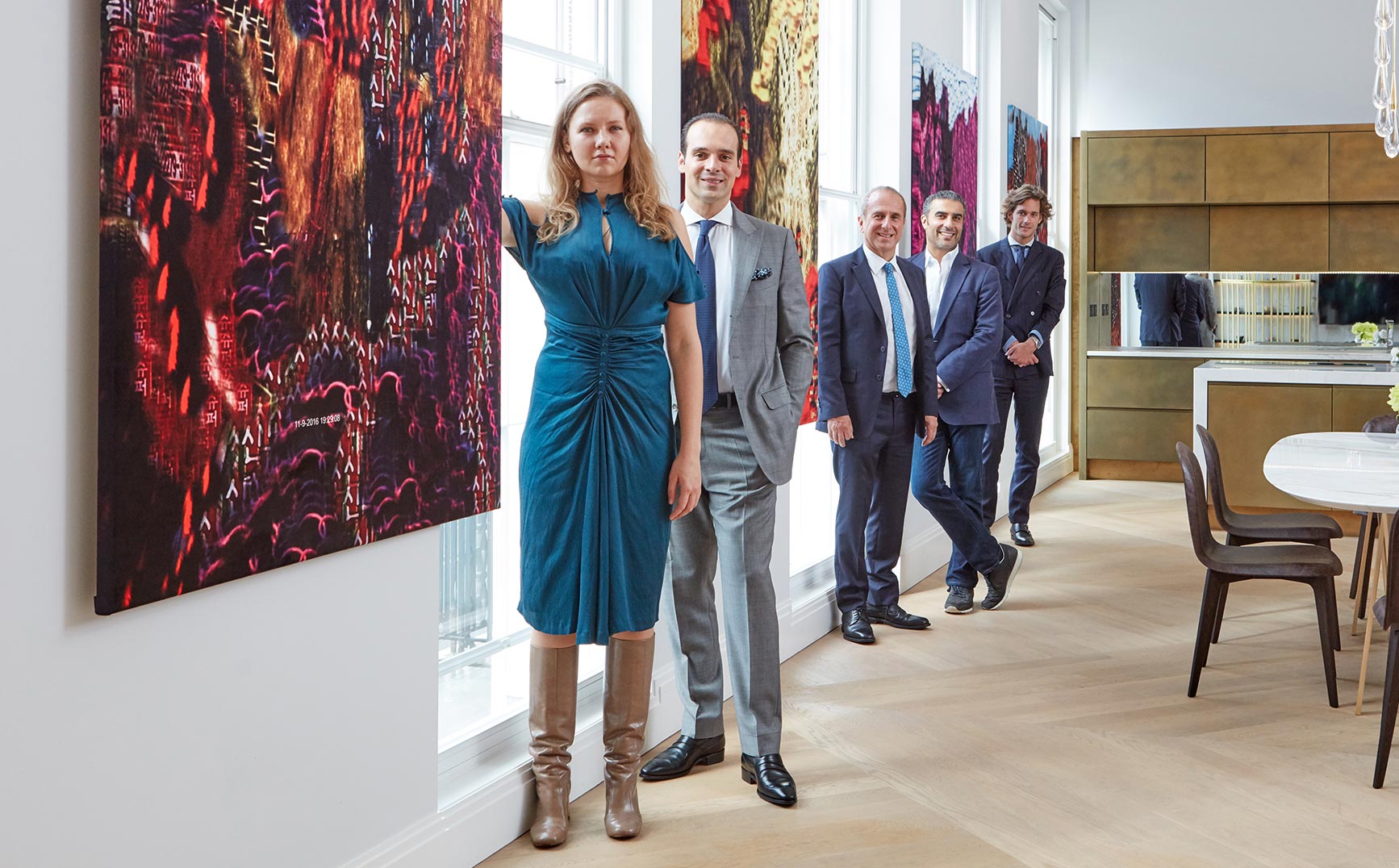 To deliver the most luxurious property event in London this year, Amazon Property collaborated with leading art curator House of the Nobleman to transform six of the dressed residences at The Park Crescent into a special Post-War and Contemporary art exhibition using world-class pieces sourced from official partners Alon Zakaim Fine Art and Lawrence Van Hagen alongside works from private collectors from around the world.

The apartments-and-art exhibition in The Park Crescent will run for three weeks until Sunday 23rd October, with viewing by either invitation or by prior appointment. 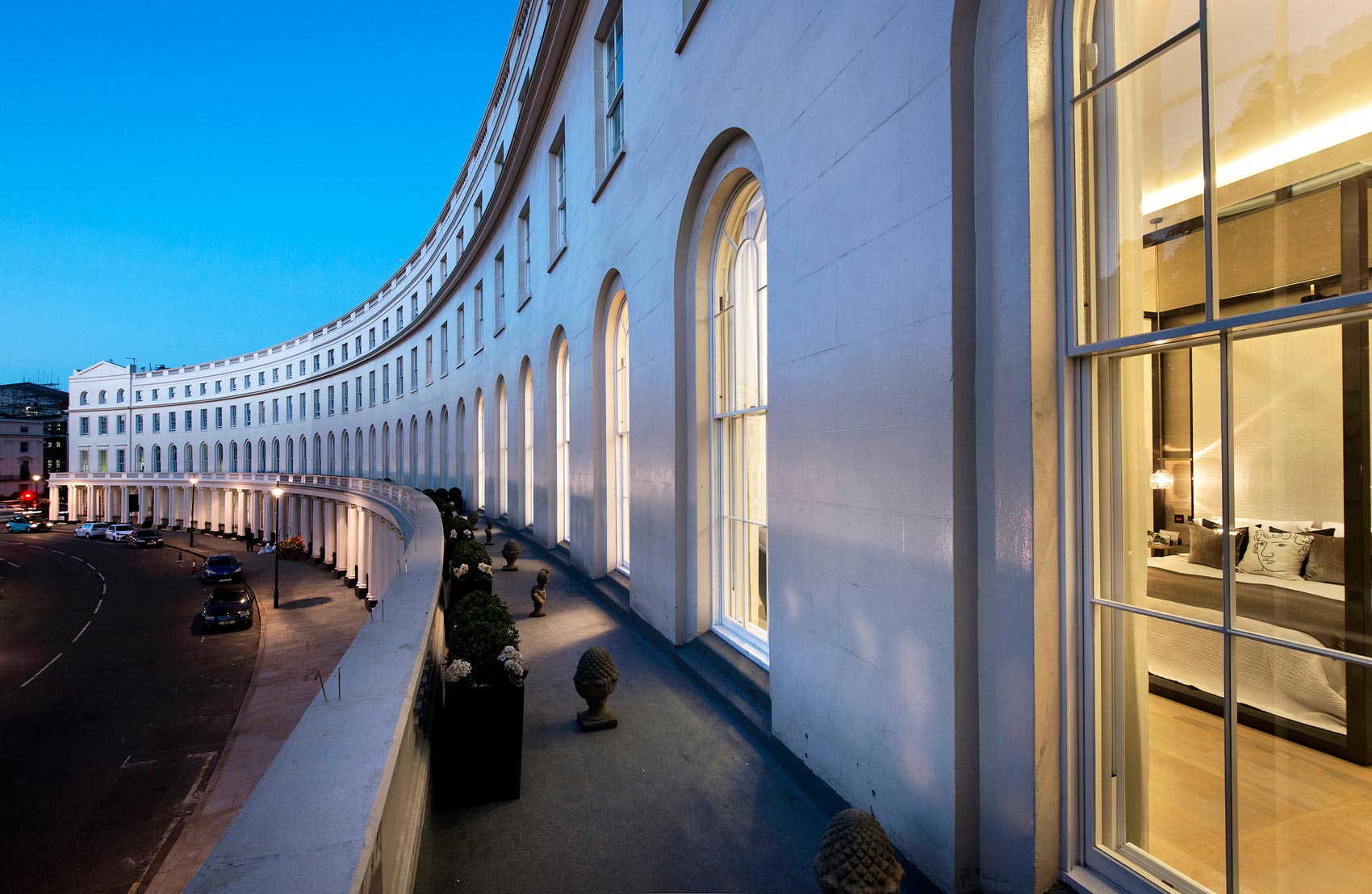 The Park Crescent is London’s only Royal crescent, Grade I listed, designed by John Nash (1752-1835) and built by Henry Peto in 1812-1820 as luxurious residences for the family and friends of HRH Prince George, The Prince Regent and Acting Head of State. Many were converted into offices in the late 20th Century until purchased by Amazon Property in 2013 and now restored to residential use providing two to four bedroom duplex, mezzanine and lateral residences. 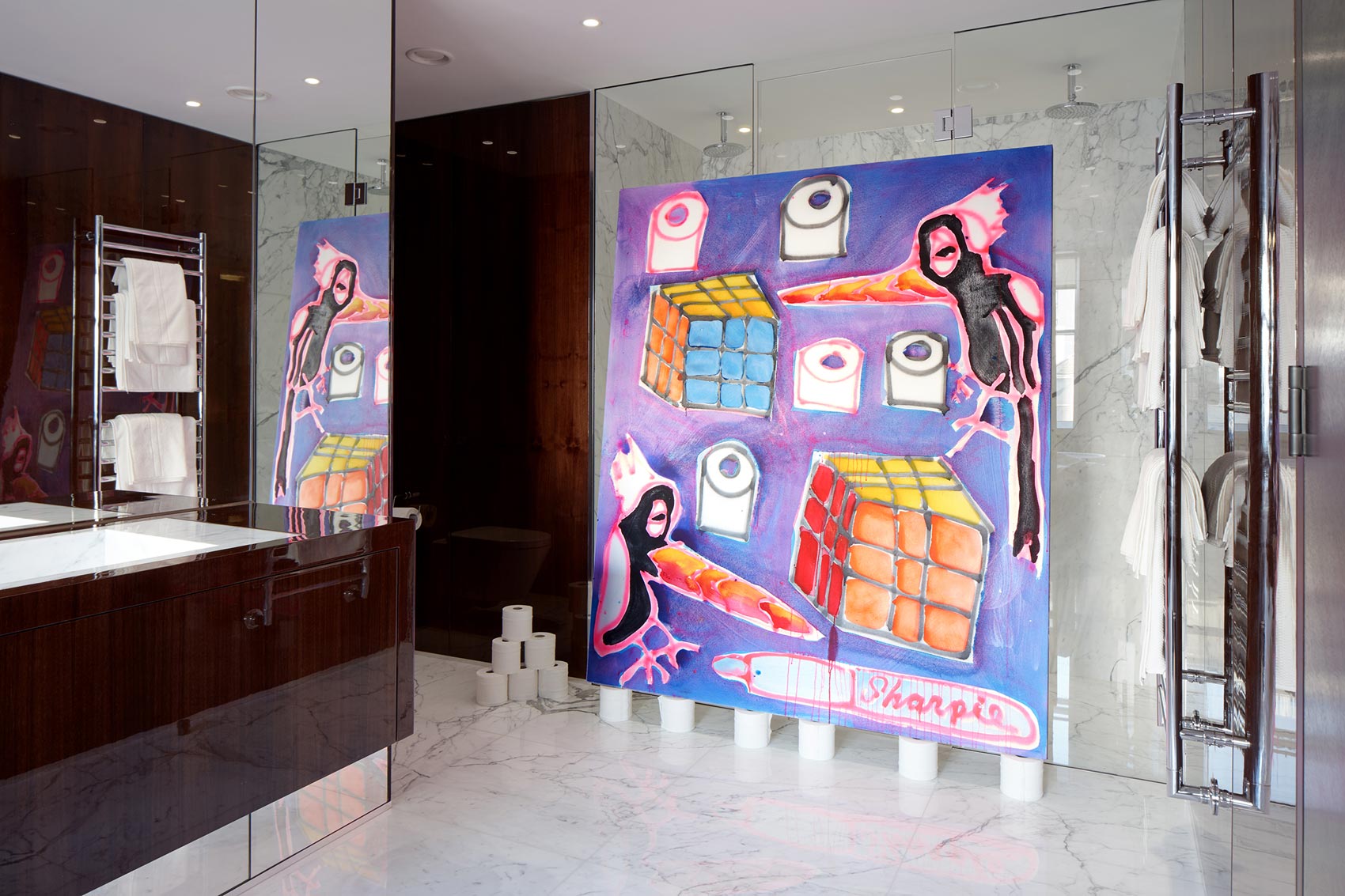 The art exhibition showcases 200 pieces of artwork and runs across six residences at the scheme, with each property having a different curatorial theme. One of the residences in the Royal crescent was originally owned by Henry Peto, the wealthy contractor who built the iconic Nash property. In 1826 he sold it for £7,200 (a fortune at the time) to Viscount Manuel Rodrigues Gameiro Pessoa, the very first Brazilian Ambassador to London and friend of Brazilian Emperor Pedro I and King George IV. The property then served as the Brazilian Ambassador’s residence until 1940 when bombing forced the residency to relocate to 54 Mount Street where it remains to this day. 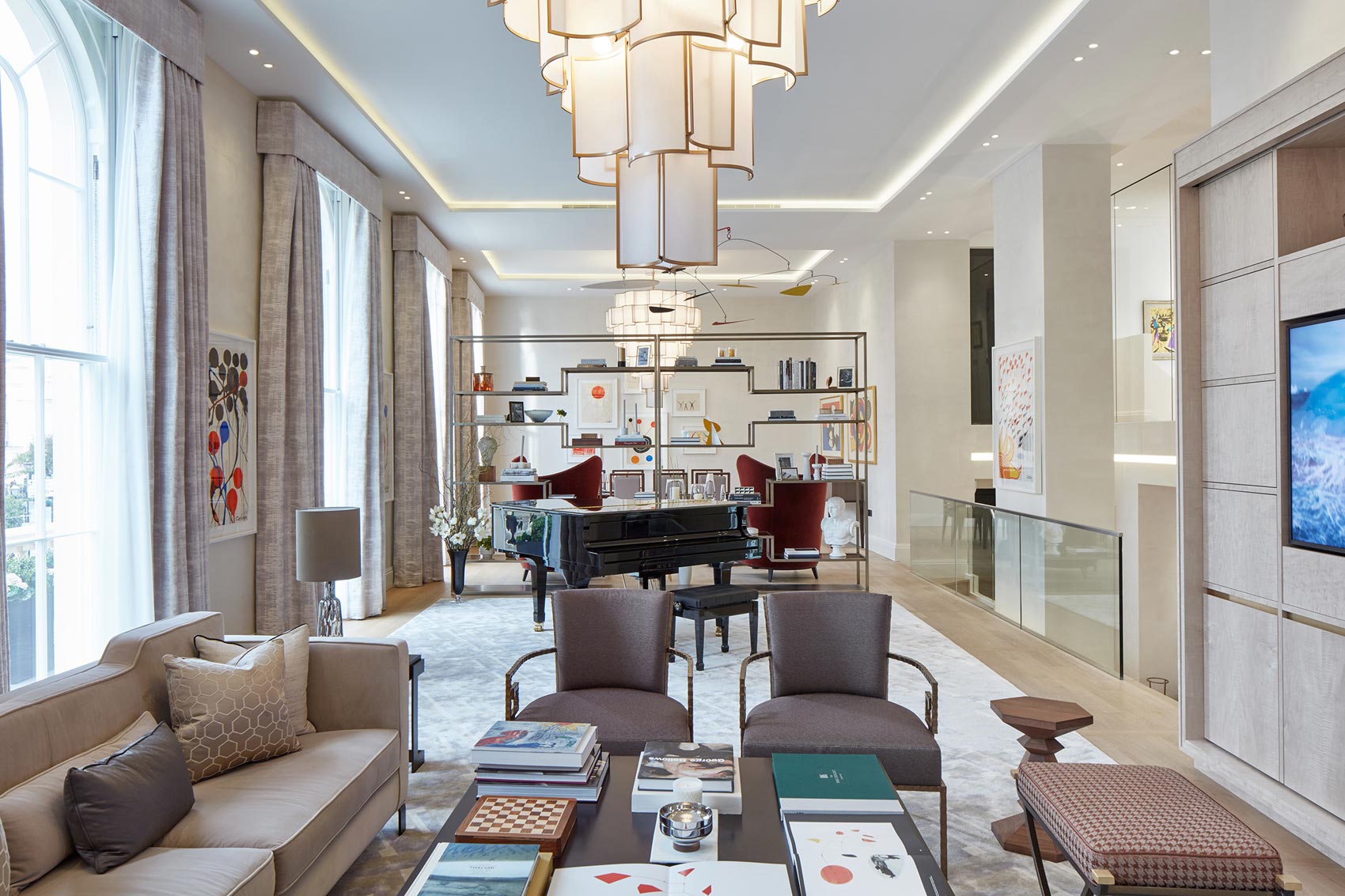 The spectacular first-floor state-rooms of the former Brazilian Ambassador’s residence are now an exceptional four bedroom residence interior-designed by 1508 London. The triple reception room has been transformed into a display of 30 Alexander Calder works, the largest display of his work ever undertaken in a residential building in the UK. Similarly, the master bedroom suite showcases 10 works by Marc Chagall, the largest showcase of Chagall work in one space ever unveiled in London. The apartment’s glass-walled mezzanine gallery showcases work by Salvador Dali, with works by Joan Miro completing the art showcase in this residence.

What was once the Brazilian Ambassadors study and suite of offices is now a three-bedroom duplex, also interior-designed by 1508 London, which features major abstract pieces by Victor Vasarely and Yayoi Kusama amongst others. 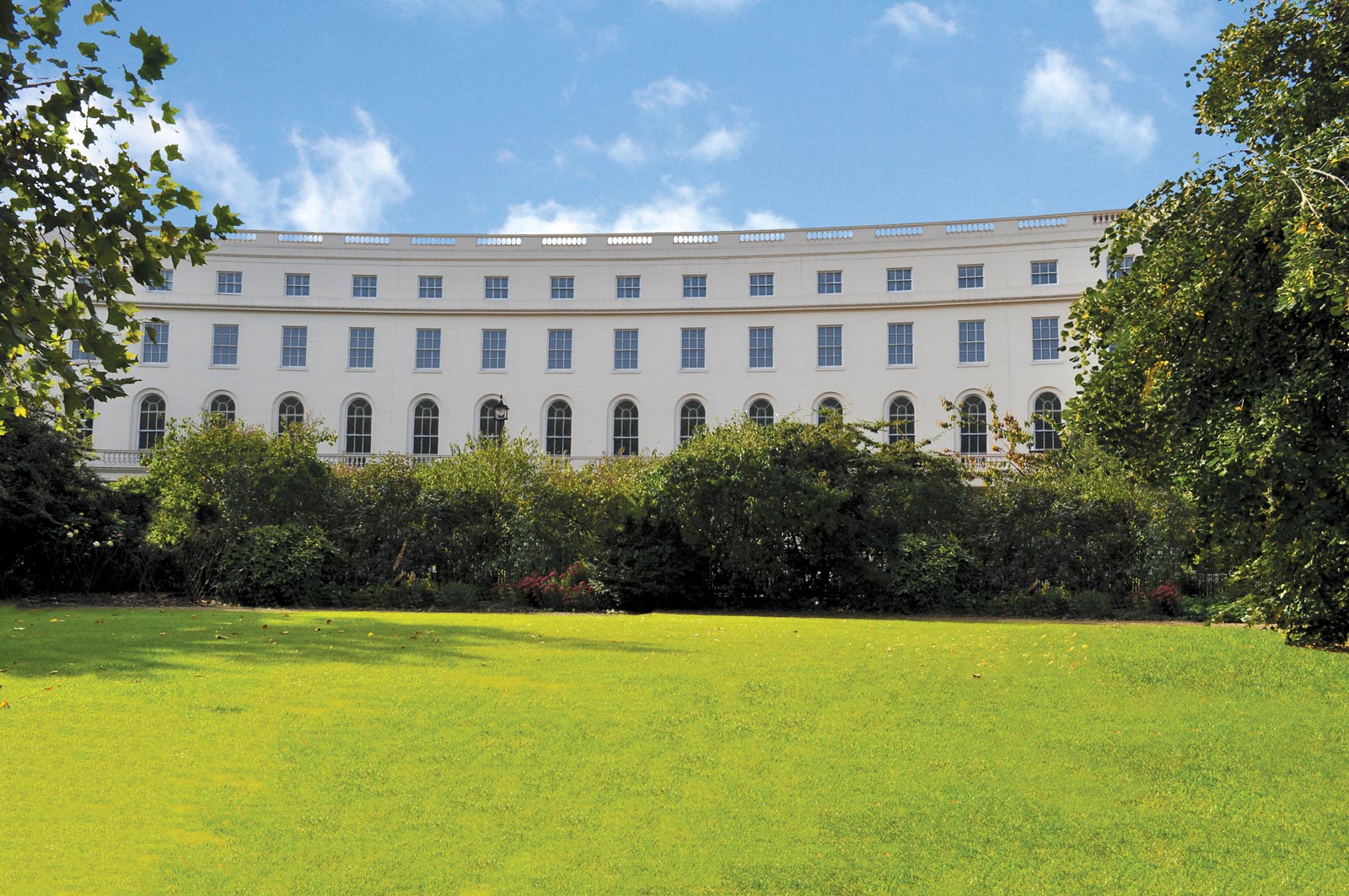 One of London’s Blue Plaques on the façade of The Park Crescent highlights that it was the home of Charles Francis Adams, Abraham Lincoln’s American Ambassador to London (son of US President John Quincy Adams) who lived there from 1863 to 1866. Charles Adams returned to the US in 1869, but his son, the US historian Henry Brooks Adams, used the crescent as his London residence between 1878 – 1908. In the former American Ambassador’s residence, a four-bedroom duplex, interior designed by Taylor Howes, has been transformed into a Modern British exhibition including works by Ben Nicholson, Paul Feiler and William Scott. 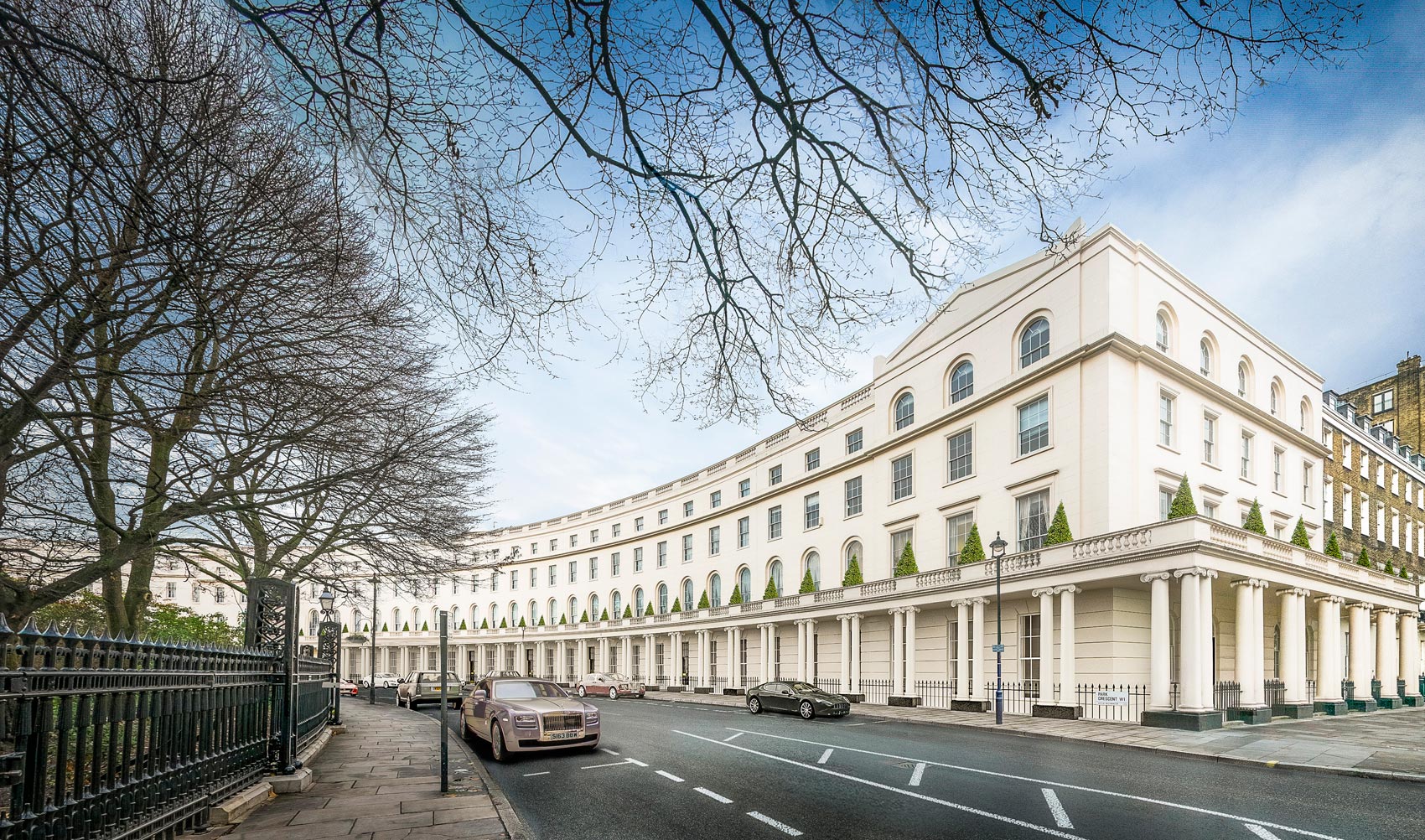 Another pre-WWII resident of the Royal crescent was mining magnate Sir Carl Meyer (1851-1922) and his glamorous wife Lady Adele, who was painted by John Singer Sargent. Meyer was the wealthy Deputy Chairman of De Beers and a board member of the National Bank of Egypt and the Hong Kong & Shanghai Bank (HSBC). Fittingly, the Meyers were great patrons of arts, funding the Royal Shakespeare Theatre in Stratford-Upon-Avon and the Royal Opera House in Covent Garden.

In the former Meyer residence, there is now a pair of duplex apartments, with interiors by DH Liberty and Taylor Howes, showcasing ‘What’s Up’, curated by Lawrence Van Hagen of LVH. Van Hagen has selected a diverse range of mixed media work by international up-and-coming contemporary artists. From abstracts by Canadian Thrush Holmes to Swiss Stefan Brüggemann’s stark political op-art, there will be a multitude of different styles of art within this special display.

The top floor of the Meyer residence is now a stunning three-bedroom penthouse interior-designed by DH Liberty, this has been transformed into a showcase for British and YBA (young British artists) work including David Hockney, Anthony Caro, Damien Hirst and Grayson Perry.

Residents of the Royal crescent have also included Lord Joseph Lister, pioneer of antiseptic surgery; General Sir George Ashe, Commander of the British Bengal Army; Count Joseph-Napoleon Bonaparte and family (brother of French Emperor Napoleon Bonaparte); actress Dame Marie Tempest, and Sir Charles Wheatstone, inventor of the electric telegraph. Alongside the six apartment-and-art residences there are additional dressed residences which visitors can view, some once the home of notable past residents. 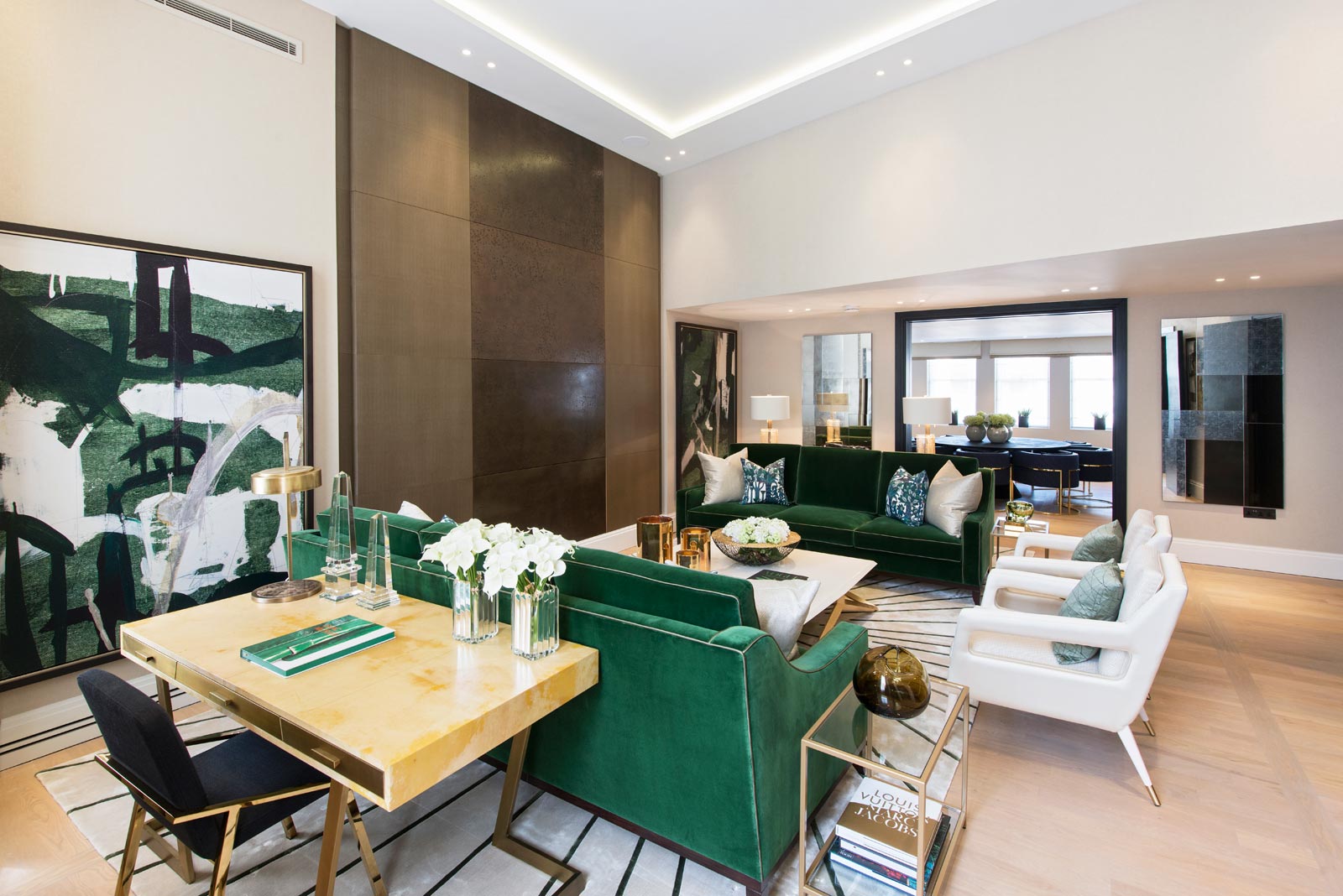 Chris Lanitis, Director at Amazon Property said: “For the main launch of The Park Crescent we have created six stunning apartments-and-art residences which showcase the very best in luxury and interior design and artwork by world-renowned and young up-and-coming artists. One of the key unique and sought after features of The Park Crescent are the high ceilings and large principal rooms which lend themselves to providing a stunning canvas for displaying important works of art.” 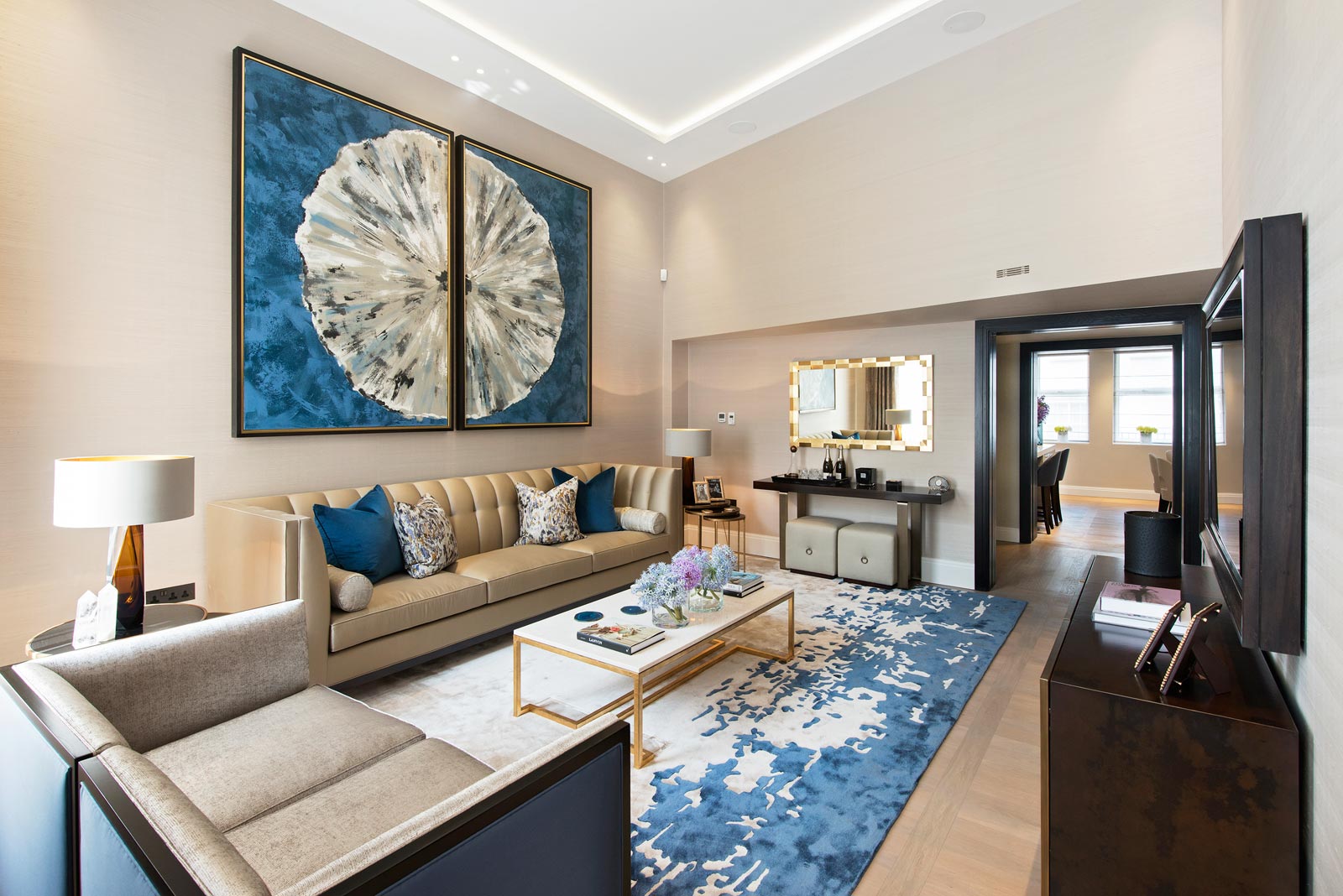 Charles Gourgey, Director at Amazon Property said: “In our view, this is the most exceptional, unique and exciting property launch in London this year. Visitors to the launch will have the opportunity to view previously unseen dressed residences and view beautiful works of art in our ‘mini-Frieze’ showcase created by our art curator House of the Nobleman. In addition, guests can tour the eight acres of private gardens whose landscaping is modelled on Buckingham Palace.” 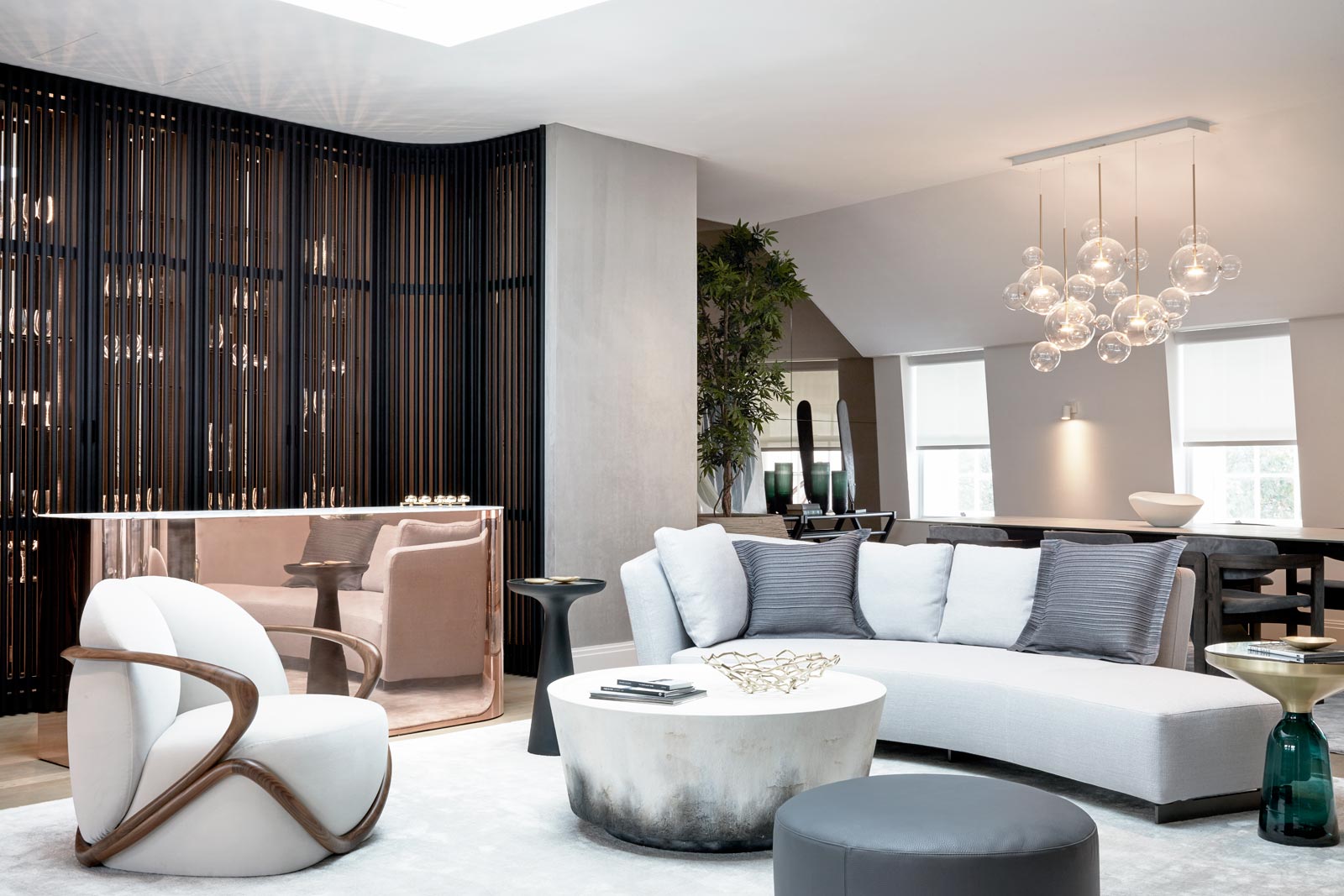 Each residence at The Park Crescent has its own character and distinctive features; the apartments range from 1,429 sqft (133 sqm) to 4,127 sqft (383 sqm) in size with ceilings up to 3.8 metres high. Each apartment has spacious double or triple height reception rooms, overlooking the eight acres of The Park Crescent’s private gardens and the 410 acres of the Regent’s Park.

The Park Crescent – Where and how

The lateral apartments at The Park Crescent are available for immediate occupation; prices start from £3,950,000.