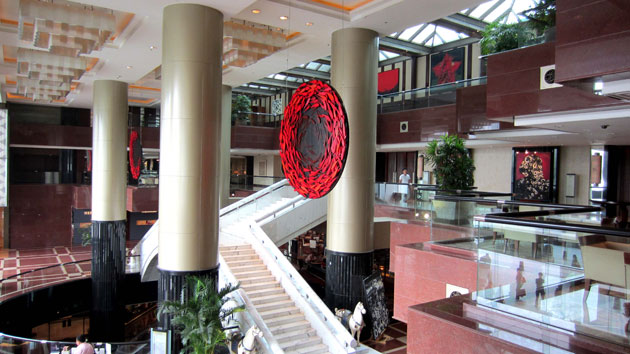 The unique art programme’s fourth artist-in-residence is Bei Shui, whose exhibition is on display throughout the hotel and the exclusive Art Suite

Celebrating its first anniversary following its launch in September 2013, The Peninsula Beijing’s “Art Residency” programme continues to showcase some of China’s most innovative and creative contemporary artists as the hotel’s “Artist-in-Residence”, living and working in the hotel in a specially designated Art Suite, together with an exhibition of the artist’s works around The Peninsula’s public areas.

The Art Suite is one of the hotel’s large suites that has been specially adapted to provide living and studio space for the artist-in-residence, together with additional exhibition space for his or her paintings. The artist works there daily, and hotel guests are welcome to visit, chat with the artist and watch him or her create their art, while additional Art Residency activities include bespoke painting classes and art tours hosted by the artist as part of the hotel’s Peninsula Academy programme. Art pieces are also available for sale.

This unique Chinese art initiative is the only programme of its kind in China, and was the brainchild of General Manager Joseph Sampermans, in partnership with MAUS (The Museum of Art and Urbanity Shanghai). “With art a primary focus of all Peninsula hotels around the world and given the enormous popularity of Chinese contemporary art, we wanted to give leading Chinese artists an opportunity to exhibit their work in a unique environment, together with the chance to live and work in a relaxing setting, hopefully enhancing their inspiration and creativity,” said Sampermans. “The programme also provides an exclusive opportunity for our guests to interact with and learn from some of China’s leading artists – insider access to understanding understanding what drives them and their art.” 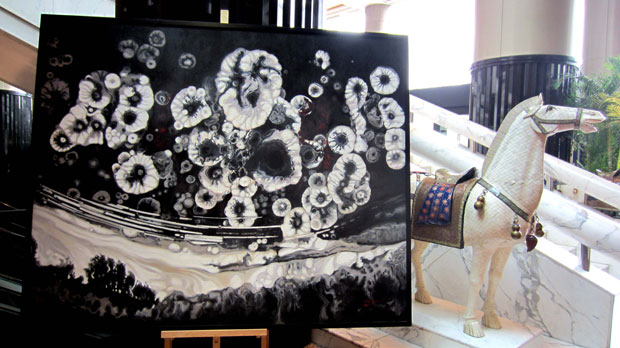 Artists selected to participate in the programme must be established and have already held at least one show overseas. Additionally each artist must donate an original painting for The Peninsula Beijing’s art auction as part of The Peninsula Hotels’ annual “Peninsula in Pink” breast cancer fund- and awareness-raising initiative every October.

The Peninsula Beijing’s latest artist-in-residence is Bei Shui, whose solo exhibition of paintings entitled The Paradox explores the illusion of movement and realism from July 2014. In this latest exhibition, more than 60 of his narratively playful creations are displayed on the first, second and third levels of the hotel’s hallways and the Art Suite, including abstract musings that range from the aesthetically pleasing to the aesthetically challenging.

The Lobby showcases several spectacular large pieces featuring the dynamic movements of vibrantly coloured goldfish, together with 400 ceramic goldfish “swimming” in the fountain outside Huang Ting Chinese restaurant – a fortuitous link to the hotel’s location in Goldfish Lane.

Born in 1968 in Jilin, China, Bei Shui had a passion for art in his early years and began to pursue his craft in 1995 by setting up a work studio in Beijing as a performance artist. What makes Bei stand out from many of his Chinese contemporaries is his tenacious vitality, with his stunning artworks a retrospective of his feelings and thoughts about humanity, nature and society.

Since 1995, he has had over twenty solo exhibitions in China and Germany, together with over thirty group exhibitions at notable museums in Beijing, Shanghai and different galleries across Germany. In 2007, four paintings in his Dialogue series were acquired by the art museum of the German Savings Bank Headquarters, while his most recognised painting, Joss Paper, was acquired by the Macau Art Museum in 2008. Since then, his works have diverged into multiple art forms, embracing his unique eclecticism towards contemporary art.

Since its inception in 2013, the Art Residency programme has featured the following artists-in-residence: