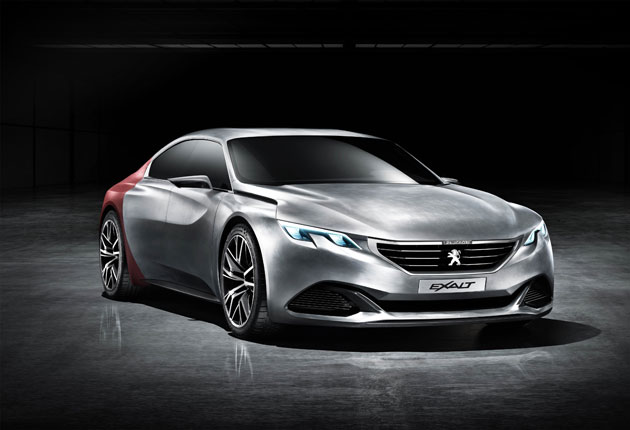 The last time Peugeot produced a sleek decent-sized coupe was 2001 when they introduced the world to the very pretty Peugeot 406 Coupe, a car designed by Pininfarina and dressed in a skin that still looks good even today.

Since that time they’ve thrilled us with their Onyx concept designs and the launch of the Peugeot RCZ, a sporty model that has opened the brand to a completely new audience.

This year we’re introduced to the Exalt, a car (interior aside) that seems to have the right credentials to make it to production unlike some of their other recent concepts. With its sleek and modern lines, the Exalt embodies the power of Peugeot design. Sitting on wide tracks and powerfully rounded wheel arches, this five-door saloon expresses its style over a length of 4.70m. The alliance of flat surfaces and straight cut lines cleverly combines aggressiveness and softness.

In homage to the art of the French motor car from the twenties and thirties, its bare steel bodywork is hand-formed by a master panel beater. One of a kind, it reinterprets the historical cues that make up automobile passion: taut and dynamic lines, a high waist line, a raked windscreen, a low roof (just 1.31m), a very slender profile that conceals a cabin that is still spacious, tightly shaped side panels with basalt fibre sills and 20-inch wheels.

The long bonnet grows out of the particularly expressive front end where the twin headlamps, set in the bumper, integrate the Brand’s recognizable signature lighting. In the middle, the powerful grille emerges from the bodywork and provides the backdrop for the doubly symbolic lion. This is because this animal is both the emblem of the Brand and in Chinese culture, the expression of power and prestige. At the bottom, the flow of air supplying the engine is divided by ‘fins’ carrying the LED direction indicators.

To improve the drag coefficient, the rear of Exalt is trimmed in Shark Skin, an efficient textile. Due to its technical grain structure, this material resulting from bio-mimicry markedly improves the aerodynamic performance of the vehicle, with the aim of reducing fuel consumption.

Its use is elevated by a straight line making the transition between the rear door and the quarter light, the transition between the grey of the steel and the red of the Shark Skin. This material contributes towards Exalt’s aerodynamic performance – with an SCx of 0.6 – in association with other elements: an air extractor in the rear bumper, the curve of the roof and the profiled mirrors.

The Peugeot i-Cockpit delivers an intense driving experience dedicated to enjoyment. The small wheel trimmed in leather and ‘chiné’, a natural wool-based mixed fabric, and the digital instrument panel are intuitively arranged in front of the driver for improved operation and reading. On the extended centre console, two folding touch screens emerge from the dashboard. The upper screen gives access to the on board computer and the Hi-Fi and navigation systems. The second screen presents a permanently visible control bar to provide access to the automatic air conditioning and the Pure Blue system.

Weighing just 1,700kg, Peugeot Exalt is powered by a plug-in HYbrid4 drive train with a total maximum power of 340bhp shared between the four wheels. The bonnet houses the 1.6-litre THP 270bhp developed by Peugeot Sport. Coupled to a 6-speed automatic gearbox, this 4-cylinder petrol engine develops a specific power output of nearly 170bhp per litre, making it one of the best in the world.