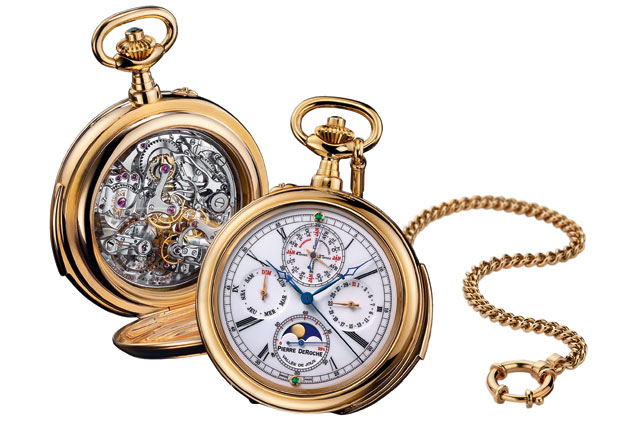 To celebrate their 10th anniversary, Pierre DeRoche have unveiled an exceptional complication watch that harks back to times gone by.

This new timepiece carries a unique history on more than one count, it is the work of a duet, intertwining generations seperated by almost a century.

Reynold Dubois, a dedicated watchmaker and Pierre’s grandfather, no doubt helped breathe life into this extraordinary mechanism. The story begins in 1920. At the tender age of 20, fresh from school, Reynold Dubois set off to study under the highly talented Jacques-David LeCoultre. He was soon singled out for his exceptional abilities, and would organise and head the workshops of the Manufacture in Le Sentier, before being assigned to Milan, then Paris.

Two generations later and it became his grandson’s turn to give a new lease on life to this unique piece, thanks to a lucky twist of fate. A few years ago, Pierre came across a treasure while browsing at an antique dealer’s: some LeCoultre ébauches and movements made in the late 19th and early 20th century, including a grande complication from around 1920. An intuition? More a certainty. Pierre bought the entire batch and made these exceptional movements his own.

Soberly titled Reynold, this Grande Complication is a vibrant homage to his grandfather and a very personal way to mark these first ten years for Pierre DeRoche.

CASE Lépine with double back and 18K gold chain, winding crown set with an emerald

LIMITED EDITION One only