More than 270 enthusiastic participants in 115 Porsche cars, including the rare Porsche 356 Speedster from 1955 and a 356 Coupe from 1963, took part at the Porsche Parade Southeast Asia 2011. The five day event, held from September 21 to 25, 2011 was organised by Porsche Club Singapore, Stuttgart Auto, Sime Darby Auto Performance together with Porsche Asia Pacific, involved more than 1,100 kilometres of fun-driving in Malaysia and Singapore which cumulated with witnessing the Porsche SC Global Carrera Cup Asia – Singapore 2011, a support race of the 2011 FIA FORMULA 1 SINGTEL SINGAPORE GRAND PRIX, from the dedicated Porsche grandstand area. The event brought together 146 Porsche Club Members and Porsche customers from Indonesia, Malaysia, South Korea, Singapore and Taiwan, joined by 127 guests from around the world. 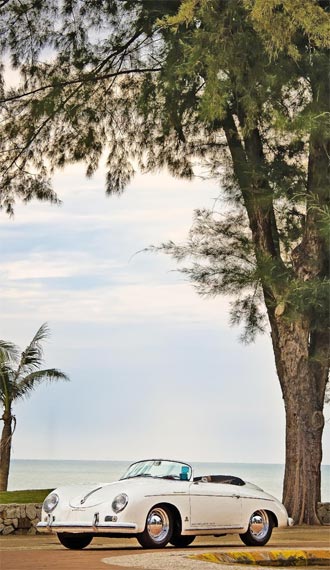 The event saw participation from the entire Porsche model range from the iconic Porsche 911 from as far as the 70s to the 911 GT2, 911 GT3, 911 GT3 RS to the Cayenne and Panamera and the mid-engined Boxster and Cayman. However, even in the company of these eye-catching sports cars, the historic Porsche 356 Speedster and the 356 Coupe – flown in from the Porsche Museum in Stuttgart, Germany, along with three Porsche 356 from private collection were the main draw amongst participants and the public alike.

Antoinette Ang, President of Porsche Club Singapore was delighted with how the event panned out. She said: “The organising committee is extremely delighted to see so many like-minded Porsche owners coming together over the last few days. In all, the Porsche Parade Southeast Asia just affirms the saying that a Porsche owner does not just buy a Porsche, but buys into the Porsche lifestyle and the Porsche family that comes along with owning the car.”

Porsche Parade Southeast Asia – The Drive
The Porsche Parade Southeast Asia started on September 21st, with Porsche Club Singapore and customers starting the first leg of the drive from Singapore to Kuala Lumpur, where the Parade visited Porsche Centre Bukit Bintang. To coincide with this momentous occasion, Sime Darby Auto Performance, the official Porsche Importer in Malaysia, also launched the Panamera S Hybrid, Panamera Turbo S, 911 GT3 RS 4.0 and Boxster Spyder. The Porsche Parade continued to Kuantan with additional Porsche Club Malaysia members joining, where the Porsche Club members stayed overnight before continuing the drive back to Singapore on the next day which included a stop-over at Mersing.

On Day 4, the group continued the Porsche Parade Southeast Asia with the Porsche Singapore Island Drive. The Porsche Parade visited major Singapore major landmarks starting from Dempsey Hill, Old Upper Thomson Road, Porsche Centre Singapore at Leng Kee Road, and a drive through the world-renowned Orchard Road, Singapore’s main shopping belt. The drive along the Old Upper Thomson Road was particularly significant as it was the original stretch of road that was used as the Singapore Grand Prix venue back in the 60s to 70s. The Singapore Island Drive ended at Fort Canning with a gathering and lunch for the Porsche Club members.

Porsche SC Global Carrera Cup Asia – Singapore 2011 – The Experience
The highlight of the weekend was being part of the Porsche SC Global Carrera Cup Asia – Singapore 2011, which supported the 2011 FIA FORMULA 1 SINGTEL SINGAPORE GRAND PRIX. The signature glitz and glamour of international motorsport was very much on parade at the official championship Sunday Brunch, where drivers joined guests for a taste of the world of Porsche. The entertaining pre-race social event included an introduction to the high-octane Porsche SC Global Carrera Cup Asia – Singapore 2011; fascinating Porsche Exclusive and Tequipment displays; and a runway show from Porsche Design. Following brunch, guests made their way to the Marina Bay Circuit where they were treated to 12 laps of non-stop, adrenaline-pumping racing action from the field of 26 international drivers, all competing in awe inspiring Porsche 911 GT3 Cup race cars.