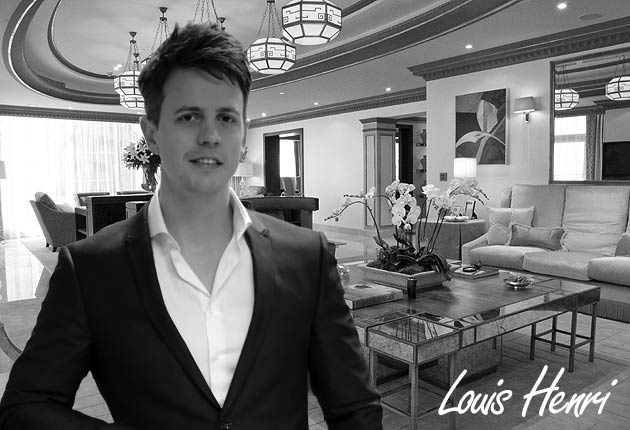 The expression of Art has seen creations with some of the most unusual materials. Dubai, a city of dreams and fortune, has created art in the way they form concrete.

The skyline of Dubai is one of the longest in the world and almost every tower is different to the next, all examples of the world’s finest architects at work. From Burj Al Arab to Burj Khalifa, it’s obvious that Sheikh Mohammad bin Rashid Al Maktoum is carrying the vision of his forefathers to create this most remarkable place. Within the walls of these concrete towers lies yet another example of art; that of the contemporary and creative mind of one Louis Henri. Born in South Africa, Louis Henri comes from a family of engineers and designers.

With this family trait and influence, Louis Henri has grown to love the creation of all things around him. He has turned his devotion to Design. First studying product design, later interior design at the University of Johannesburg, Louis Henri then took his new skills and creative mind to the UK’s city of opportunity, London, where he worked for a British design company, Andrew Martin International and a leading property developer.

In 2007, Louis Henri decided to put all the experience and creative mind into his own interior design practice. His contemporary and mischievous style was free to come out and come out it most certainly did. His portfolio of interiors include some fantastic apartments in the Avenue Montaigne Paris, a villa in Cap d’Antibes, and further Apartments in Mayfair, Knightsbridge, Kensington, St Johns Wood and a Palace in Saudi Arabia.

Louis Henri also put his imagination and devotion into designing custom made furniture, lighting and carpets. His brother Balthasar hand crafted many of the pieces in his own workshop, sold as limited edition pieces only. 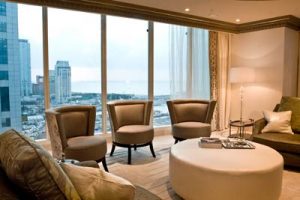 After receiving the initial brief from the client, Louis Henri had a task on his hands. Putting together a work force and suppliers that will understand and be able to carry out the re-invention of this apartment was not going to be an easy task. Carrying a full team internationally challenges, the logistics of the project and thus finding within Dubai a team of professionals was the ultimate aim. To keep the exacting standards that Louis Henri requires was vital in keeping the detail and ultimately the expression so set out within the design brief and the creative plan that had been formed. A number of suppliers were employed from London to perform some of the finer and more specialist decoration.

The grand scale and the layout of the apartment was ideal for Louis Henri in being able to create an ambiance of importance and homely atmosphere that President and guests alike can relax in. Understanding that entertaining will be a part of president’s formal obligations, the apartment has been broken down to create varied areas to cover this and not forgetting the family aspect. The reception is split between a west side with sea views and the opposing side for invited guests or simply to watch a little TV. However the TV has been cleverly hidden to help keep the flow of colour and furniture when not in use but primarily to ensure your attention is with the guests. 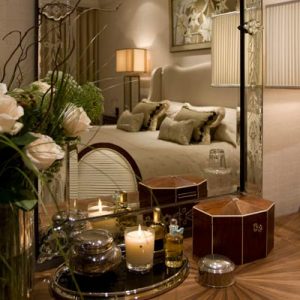 Creating a presidential apartment without pushing too many formal notes into the design can challenge concept and brief. The apartment is after all an apartment, a place for a president to retreat, relax, recoup and be suitably refresh having re-calibrated the grey matter. One more aspect in maintaining the element of freshness is the influence of a hot and humid UAE sun. When in the Emirates you need an oasis to retreat too. Under influence of this Louis Henri has gone with a gentle and subtle mix of 18th century France and early to mid-19th century England. The contrast between the two brings the calm and flowing shapes of the French influence mixed with symmetrical form and influence of the English. In many places you sense and feel a hint of Art Deco.

All rooms carry similar design and palette, but small changes are made to assist and attract change to the eye, keeping the artistic imagination working as you drift through the apartment, providing a haven of calm, light and cool is the intention and guiding principle in this project. The colour palette follows this principle and is soft and light. Greens and creams elegantly flow through the entire apartment keeping a fresh more open feeling to the rooms and generating a calm natural feeling to the senses.

Louis Henri finds inspiration for colour from the world around him. Something as simple as an antique watch or piece of jewellery can generate a full palette to suit a design concept. Dubai was the basis of inspiration for the green note of the apartment. This is after all a city built on a desert; Inspiration came in producing sublime contrast between a colour less seen in the UAE alongside the cream and beige’s of the desert lands.