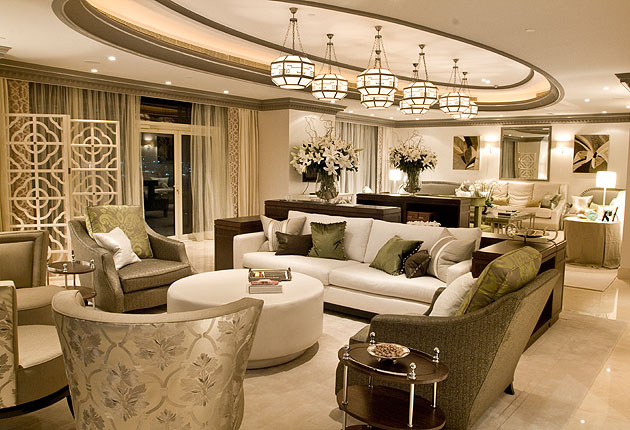 Last week we published the first part of this feature on the Louis Henri Presidential Apartment in Dubai, covering the planning and themes. For the second part of the feature we discuss the finish, decoration and provide our summary. 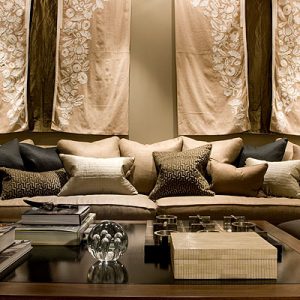 To maintain a soft and harmonic feel, the fabrics must have the light hues and soft tones that work with the mind to create the calm that any president would find sublime at the end of an intense day of decision making. The mix of glossy and matt fabrics, flooring and aided by the quality LED lighting allows for the soft transfer of light around the rooms and keeps the contemporary feel that is expected in a Louis Henri design. The majority of the fabric used was luxury high count linens. Hints of luxury wool’s and some velvet by Andrew Martin maintained a little warmth in the rooms to counter the cooling effect of the climate control system but at the same time enhancing the luxurious look and feel. Walls decorated with mock Linen curtains were used to draw some of the vast space in and create a cozy more cocooned feeling while at the same time subduing the light.

The master bedroom decorated in heavenly whites and creams entices you in to relax and fall asleep as if to be sleeping in the clouds. Two Art Chairs from Andrew Martin frame an amazing view. Put together with soft silky velvet fabric from Lelievre Paris encouraging your mind to sit and have that first coffee in the morning overlooking the sea.

The family area had been decorated to reduce light and reduce reverberation of TV and stereo noise alike. With careful placement of decorative items and materials, the area allowed for a crisp and clear sound to be generated. Low reflective materials such as linen and matt wall coatings were used. Arabian influence was elemental in the artwork on the walls. Drawn from Saudi traditional coats made from camel hair, the artwork was then customized using some beautifully embroidered floral motives and delicately embellished with white Swarovski crystals. All the rugs placed around the apartment came from Louis Henri’s own collection known as ‘Parquet’. 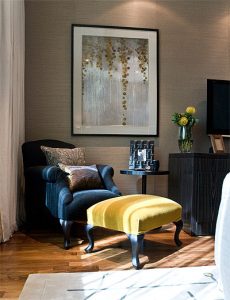 The proportions of the apartment allowed Louis Henri to manipulate the space with some unique design cues and use of furniture. For example, the walls within the entrance hall are symmetrically lined with many mirrored shelves. Upon these shelves stand cream coloured thistle pots. The inspiration, well that came from the manner to display Chinese porcelain and Rifles, during 18th century France and England. The thistle pots derived from the thistles meaning to protect, therefore highlighting the perfect influence to have at the entrance to a president’s retreat.

Design elements by Louis Henri consist of many pieces. The coffee table adorned with large lacquer ball feet with hidden drawers and drinks trays. The central book shelf hugs the seating and creates a view with a tunnel effect onto the Palm Jumeirah. De Villiers Lamp made by Balthazar Louis Henri’s brother is from their limited edition collection and had been given a diffuser to reduce glare. I have noted many design elements created by Louis Henri.In fact, almost all upholstery and hardwood items were designed and created to generously endow this apartment.

The art in the apartment had been commissioned with the client encapsulating project criteria and plan in mind. Each room received its own attention to ensure a flow of subtle change.

Summary
I can imagine having stepped out of my cavalcade of black cars, security laden with dark suits and glasses, touching their ears in anticipation of instruction. Walking out of the lift, the apartment door opens and the inviting smile of the butler encourages me in. He offers refreshments while at the same time removing my jacket. “Long Day Sir, Take a seat in the lounge”. I feel calm encapsulate me as my mind seems to melt like ice after strenuous diplomatic meetings. I sit and remove my shoes, while starring out at the turquoise sea…

I could take this further but suffice to say the imagination, senses and feelings are invigorated by the luxurious tones, fabrics and furniture. Louis Henri has created exactly that which he intended and he has done it with such passion.