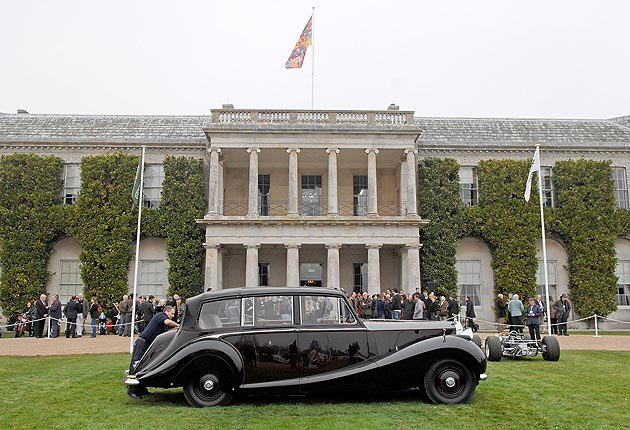 For the first time ever, Cartier will focus on just one set of vehicles, but what a collection of machines they will be! As a mark of respect to Her Majesty Queen Elizabeth II for her Diamond Jubilee, Goodwood and Cartier will gather together an astonishing selection of vehicles all personally owned or used by Her Majesty.  These vehicles have never been seen in public together as a collection, and the quality and variety of the vehicles promises to be simply staggering.

Many vehicles will come from the personal collections of Her Majesty, including Sandringham and the Royal Mews.  Others will be sourced from overseas governments and private collections, and all will have a genuine use and connection with The Queen.

Formal state limousines and carriages will include Her Majesty’s 1961 Rolls-Royce Phantom V, modified specifically to fit on The Royal Yacht Britannia, a 1929 Daimler Double Six 30hp Brougham and a 1920 carriage from the Royal train.  Foreign Travel will include cars used for overseas State visits, sent over to Goodwood specifically for the Cartier ‘Style et Luxe’ with official government permissions.  These include the striking Chapron-bodied Citroen SM Decapotable used for The Queen’s State visit to France in 1972, with the release of this car being personally signed-off by the French President.  Festival visitors will also see a special 1950 Lincoln Cosmopolitan ‘bubble top,’ plus a Humber Super Snipe used for Her Majesty’s first Commonwealth Tour.

Working cars are set to include a unique coachbuilt 1956 Ford Zephyr Estate, purpose built to carry luggage, plus a 1961 Vauxhall Cresta Friary Estate, used to transport Her Majesty’s corgi dogs.  Personal ‘Regal Runabouts’ will include a Rover P5 and Daimler Double Six used extensively by The Queen, plus Prince Philip’s 1961 Alvis TD21.

An unusual vehicle class of Royal Household toy cars will include a 1928 Citroen C4 presented to The Queen, plus an Austin J40 pedal car and 1966 Aston Martin DB5 007-replica pedal car.

On the Saturday and Sunday of the Festival of Speed, a number of Her Majesty’s cars will briefly move from the Cartier Lawn and slowly parade along the Goodwood hillclimb for a special Diamond Jubilee tribute to Her Majesty The Queen.

During the Festival weekend, a visit to the Cartier ‘Style et Luxe’ is made all the more enjoyable by a superb soundtrack of live jazz playing on the bandstand on Saturday and Sunday, making this is an unmissable occasion for anyone who appreciates the inherent creative magnificence of great automobiles.

Tickets and further information for the 2012 Festival of Speed and Goodwood Revival can be found on the Goodwood website, or via the Ticket Hotline +44 (0)1243 755055