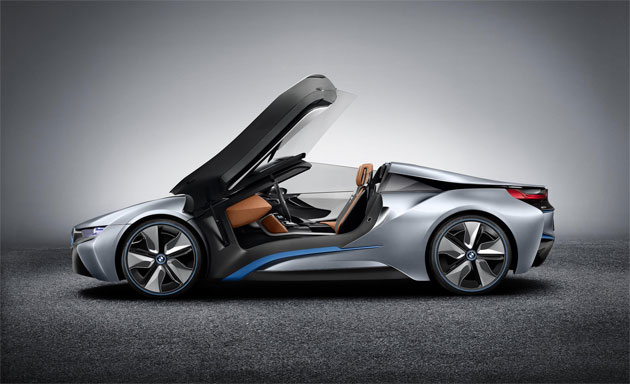 The i8 Concept Spyder represents a vision of the future where intelligent thinking, advanced materials and innovative construction techniques fuse together to create a high performance roadster that is outstandingly efficient and environmentally aware. In effect, the i8 Concept Spyder possesses the performance of a sports car with the consumption of a city car. 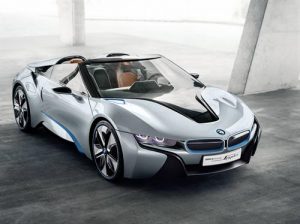 Although closely related to the original i8 Concept, the new i8 Concept Spyder is strictly a two-seater, with a shorter wheelbase and new, upward swivelling, windowless doors. It also features a fresh interpretation of the i8’s interior design, and additional on-board equipment including a pair of electric scooters, housed under a transparent tailgate. Underneath the athletic and futuristic exterior skin, the i8 Concept Spyder is as advanced as its Coupé relation, built, once again, around the innovative LifeDrive architecture and underpinned by lightweight, modular construction.

A new way of making a sports car
The i8 Concept Spyder uses the modular LifeDrive architecture as developed by BMW i, joining together the various independent functional units of the vehicle in the most efficient way possible. The Spyder’s occupants sit in a very light but immensely strong carbon-fibre-reinforced plastic (CFRP) cell, while the various Drive modules (mainly constructed from aluminium components) are those of an operational nature – powertrain, chassis and the safety structures. So successful is this approach that the additional weight of the high-output Hybrid drivetrain has been completely cancelled out. A further example of the LifeDrive concept is the housing of the car’s lithium ion batteries in an ‘energy tunnel’ that joins the front and rear axles, thereby maintaining a low centre of gravity and ensuring BMW’s trademark 50:50 weight distribution. 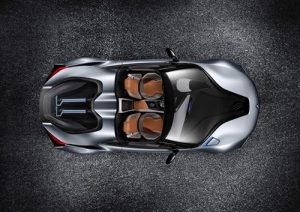 A new interpretation of BMW i design
The bold, futuristic design of the i8 Concept Spyder perfectly illustrates the dynamic and lightweight character of the vehicle, with its traditionally sporty proportions of a wide but low body, minimal overhangs and an aggressive stance. Large body panels and distinctive aerodynamic elements such as the spoiler lips, Air Curtains and aero flaps are as functional as they are visually expressive. The new upward-opening doors pivot forward around the axis of the A-pillar, giving the i8 Concept Spyder a particularly distinctive appearance with them open. A two-section roof is planned for when the weather is less favourable. At the front, advanced, laser light headlamps utilise the familiar BMW i ‘U’ design, while at the rear a transparent tailgate reveals two electric scooters ready for use. Given BMW i’s approach to personal mobility, these are ideal for relaxed local transportation once the vehicle is parked.

The cockpit of the i8 Concept Spyder is designed around a three-layer composition, with the interlocking lines and surfaces complementing the style of the exterior. The ‘off-white’ outer layer is the supporting structure; the inner layer the ‘comfort’ portion featuring the seats and storage, while the ‘technical’ layer that includes the steering wheel and information display is the third segment. The Spyder features sporty, naturally tanned orange leather for parts of the seats and various areas of the interior structure, while there have been slight modifications to the design since the original i8 2+2 model. 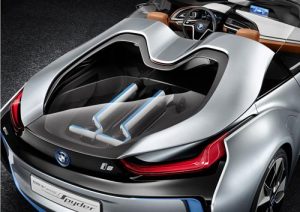 The very latest in ConnectedDrive technology
The driver has three screens from which to access information: the twin ellipses of the instrument cluster, the central information display and the climate display. The cluster has a digital speedometer and an efficiency display, giving information on how much energy the driver is currently using or recuperating, as well as navigation details and fuel range. In the ECO PRO mode that maximises efficiency this ellipse turns blue: in SPORT mode it glows orange.

The 8.8-inch central screen displays a wide range of information from the status of the hybrid system to navigational data and connectivity functions. This is particularly important given the advanced suite of driver assistance systems found in the new i8 Concept Spyder, such as the camera-based proactive collision warning feature, park assistant and traffic jam assistant. By using a smart phone, the driver can find where his vehicle is parked with CarFinder; show nearby charging stations; allow batteries to be charged at pre-determined times and stay informed of the vehicle’s status. Even the interior can be pre-warmed on a cold morning. Not only does the extensive connectivity of the i8 Concept Spyder allow the driver to integrate the car fully into their life, it also enables the car to assist the driver in a proactive way. For example, the vehicle’s power electronics are linked to the intelligent navigation and traffic guidance systems. If a jam is detected ahead the hybrid system will charge the battery in advance, thereby allowing the car to run in pure electric mode while stuck in traffic, to the benefit of fuel consumption and emissions reduction.

Intelligent hybrid power equals high performance and efficiency
A plug-in hybrid, the i8 Concept Spyder is powered by an eDrive drivetrain combining a high performance electric motor with a turbocharged, three-cylinder petrol engine. The lithium Ion batteries are stowed centrally for the benefit of weight distribution, and can be charged quickly from a domestic power socket. The i8 Concept Spyder uses a 131hp electric motor to power the front axle, and a 223hp turbocharged three-cylinder engine to power the rear axle. Both have been developed in-house by BMW. With its lightweight construction the combined power output of 354hp propels the Spyder from zero to 62mph in just 5.0 seconds and on to an electronically limited top speed of 155mph, yet delivers an outstanding combined fuel consumption of 94mpg.

The electric motor gets its energy from the car’s lithium ion batteries and can be fully charged via a domestic plug socket in under two hours. The Spyder has a range of 19 miles running on electric power alone, while a high voltage generator hooked up to the combustion engine can generate additional power if needed and store it in the battery. Due to the arrangement of the power sources, the Spyder can run in front-wheel, rear-wheel or all-wheel drive, the vehicle’s electronics deciding on the optimum configuration depending on the situation. BMW i is founded on the principles of inspiring design, purpose-built solutions and sustainability. The sub-brand has energetically demonstrated its work previously through two concept cars and this third vehicle gives the clearest indication yet of how BMW’s fourth brand will appear when it is revealed in 2013.