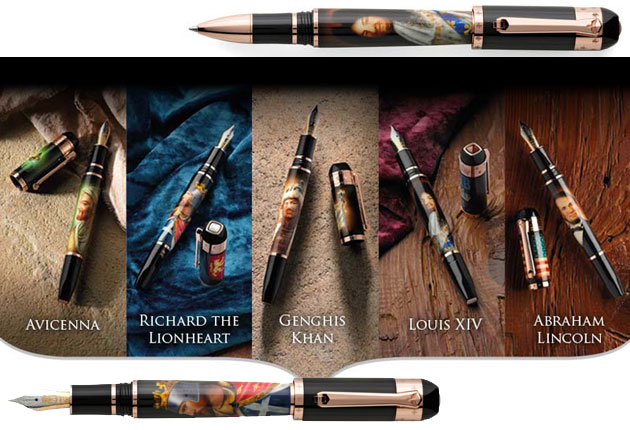 Tibaldi introduces a precious pen collection, celebrating the most powerful and influential leaders the world has ever known.

The Tibaldi CLARI VIRI collection spans the gamut from Abraham Lincoln, Louis XIV, Genghis Khan, Richard the Lionheart and the scientist Avicenna. Each writing instrument is hand painted with a portrait on the barrel and a symbol of the great leader on the cap. Designed, painted and produced with supreme precision and craftsmanship, Tibaldi pens are ornate accessories and masterpieces of technological innovation. Tibaldi pens embody the ancient concept of the Divine Proportion, or Phi, to every minute detail, resulting in writing instruments of sublime elegance.

Avicenna (c. 980 – 1037)
Legendary Persian polymath Pur Sina, known as Ibn Sina, or as Avicenna, wrote almost 450 treatises on a wide range of subjects, of which around 240 are known to have survived. His body of work included discourses on philosophy, logic, astronomy, alchemy, geology, psychology, physics, mathematics and Islamic theology, and as well as poetry. Among his greatest contributions to benefit mankind were his studies of medicine, the most famous of which are The Book of Healing, a philosophical and scientific encyclopaedia, and The Canon of Medicine, an encyclopaedia of medicine in five volumes, completed in 1025. The Canon of Medicine provided a complete system of medicine according to the principles of Galen and Hippocrates, presenting a summary of all the medical knowledge of the time. It served as a standard medical text at many medieval universities as late as the 17th Century. Avicenna is rightly regarded as the most famous and influential polymath of the Golden Age of Islam.

Richard the Lionheart (1157 – 1199)
Third of five sons of King Henry II of England and Eleanor of Aquitaine, Richard I was King of England from 1189 until his death, as well as the Duke of Normandy, of Aquitaine and of Gascony, while holding other noble titles in France. He is best known as Richard the Lionheart, a great military leader and warrior. By the age of 16, Richard commanded his own army, quelling rebellions in Poitou against his father. Most notably, and an aspect of his life celebrated in literature an on screen, Richard was a central Christian commander during the Third Crusade, leading the campaign after the departure of Philip II of France. Richard achieved notable victories against his Muslim counterpart, Saladin, although he did not wrest Jerusalem from Muslim rule. Richard was regarded as a pious hero by his subjects, and remains one of the few kings of England known by his sobriquet, rather than his regnal title. He continues to be remembered an enduring iconic figure in both England and France.

Genghis Khan (1162 – 1227)
Born Temujin, Genghis Khan was the founder and Great Khan, or Emperor, of the Mongol Empire achieved power. After founding the Empire by uniting many nomadic tribes of northeast Asia, he set about conquering of most of Eurasia. Beyond his military accomplishments, Genghis Khan also advanced the Mongol Empire by decreeing the adoption of the Uyghur script as the Empire’s writing system. He also promoted religious tolerance and created a unified empire from the nomadic tribes of northeast Asia. His khanate grew to be the largest geographically contiguous empire in history. Genghis Khan died in 1227 and was buried in an unmarked grave in Mongolia at an unknown location. His descendants went on to establish the Mongol Empire across most of Eurasia by conquering or creating vassal states out of all of modern-day China, Korea, the Caucasus, Central Asian countries and portions of modern Eastern Europe, Russia and the Middle East. Genghis Khan and his empire have a fearsome reputation, yet present-day Mongolians regard him as the founding father of Mongolia.

Louis XIV (1638 – 1715)
Known as the Sun King, Louis XIV of the House of Bourbon ruled as King of France and Navarre from 1643 until his death. An adherent of the divine right of kings, Louis sought to eliminate the remnants of feudalism persisting in parts of France. He became one of the most powerful French monarchs, exercising absolute rule that endured until the French Revolution. During his reign, France was the leading power in Europe, fighting three major wars: the Franco-Dutch War, the War of the League of Augsburg and the War of Spanish Succession. Louis encouraged and benefited from the work of prominent figures such as Mazarin, Colbert, Molière, Racine, Boileau, La Fontaine, Marais, Le Brun, Rigaud, Bossuet, Le Vau, Mansart, Charles and Claude Perrault and Le Nôtre. Upon his death just days before his 77th birthday, Louis was succeeded by his five-year-old great-grandson, Louis XV, as all of his other heirs predeceased him. His reign of 72 years and 110 days is the longest of a major country in European history.

Abraham Lincoln (1809 – 1865)
As the 16th President of the United States from March 1861 until his assassination in April 1865, Abraham Lincoln led his country through the American Civil War. It was the war that abolished slavery and reasserted the strength of the Union. Lincoln came to symbolise the power of the American Dream. Born to a poor family, he was self-educated, became a lawyer, entered politics in his 20s and served as a member of the House of Representatives during the 1840s. Lincoln secured the Republican Party presidential nomination in 1860. His election prompted southern slave states to secede from the Union to form the Confederacy. After the Confederate attack on Fort Sumter on 12 April 1861, Lincoln’s goal was to reunite the nation, while pursuing the ending of slavery. This resulted in the Thirteenth Amendment to the United States Constitution, which permanently outlawed slavery. His Gettysburg Address of 1863 became the most quoted speech in American history, an eloquent statement of the nation’s dedication to equal rights, liberty and democracy. Lincoln has been consistently regarded as among the greatest of U.S. Presidents.