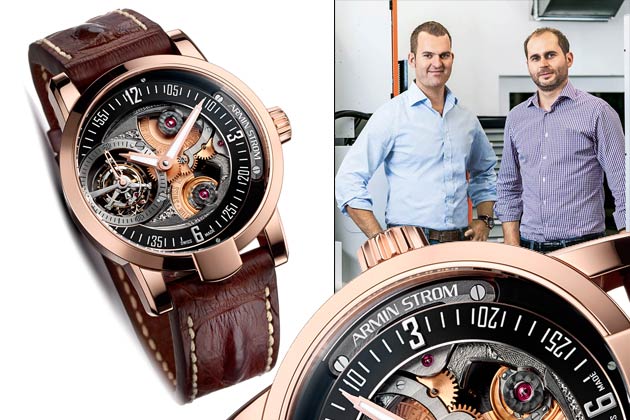 The introduction of the Tourbillon Gravity Fire comes less than a year after the release of Armin Strom’s first calibre with a rotating carriage. The unveiling took place at the Salomons Country Estate in Royal Tunbridge Wells in Kent, England and was hosted by The Markerstudy Group. Armin Strom brand ambassador and watch enthusiast Max Chilton, (Formula 1 driver for the Marussia F1 Team) was in attendance along with some of the regions most influential style-setters and business leaders.

For those that might not be familiar with the Burgdorf-based watch manufacturer, the brand was founded by Armin Strom in 1967. Originally the young Strom concentrated on selling pre-made watches and providing restoration services, however, it did not take long before he started working on his own creations with his first masterpiece being a gold pocket watch, hand-engraved with a polished blue lapis lazuli dial. in 2006 the company was incorporated as Armin Strom AG and in 2009 the company moved to a larger production facility in the watchmaking town of Bern. Strom continued to hone his watchmaking skills, becoming a Master Skeletonizer, his unique design style created a skeletal appearance which showed off the hand-finished movement of a watch, these creations were considered too good to remain hidden behind a dial and a steel case back. It is this iconic horological design feature that remains central to the company philosophy today. Although Armin Strom ‘the man’ is now enjoying a well-earned retirement, Serge Michel, the owner of Armin Strom continues to maintain Strom’s legacy and is creating a legacy of his own for this high-end watchmaking brand by producing timepieces that still make you stop, stare and smile.

Serge Michel, owner of Armin Strom, said: “We are delighted to launch the new Tourbillon Gravity Fire at such a prestigious occasion. As with all our timepieces, this watch demonstrates the highest level of handmade craftsmanship, which has been the success behind Armin Strom for over 40 years. It is a timepiece that will prove irresistible for collectors who value this level of manufacture.”

On the dial side, the Tourbillon Gravity Fire reveals the two opposites that animate every watch movement: winding and regulation. While the tourbillon mechanism makes regulation more precise by reducing the effect of gravity, the micro rotor harnesses this same power to supply energy to the gear train, thus exploiting both the positive and negative impacts of the Earth’s gravitation. The hands display the time from an off-centre axis. The Armin Strom Tourbillon Gravity Fire continues this unique design style and features the flame motif inspired engraving, which adorns all Fire timepiece movements, together with an 18ct rose gold case. The new edition will be limited to 50 pieces.