For over 250 years, Vacheron Constantin has been nurtured by a philosophy dedicated to highlighting our shared cultural heritage. The Métiers d’Art cultivated by the Manufacture serve as bridges spanning successive eras, by perpetuating sometimes neglected crafts with ancient origins. More specifically, the timepieces in the Métiers d’Art collection lie at the crossroads of past, present and future, and crystallise the human challenges that have forged and continue to nurture these skills from generation to generation. 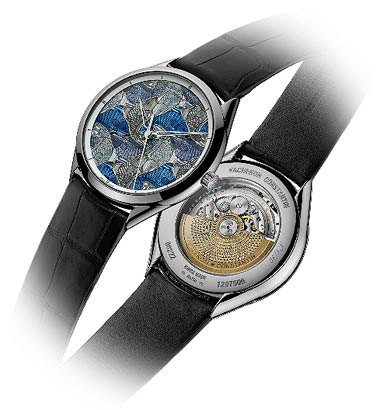 An exceptional alliance between the artistic crafts cultivated by the Manufacture Vacheron Constantin: engraving, enamelling, gemsetting and guilloché work. A tribute to the graphic expression of the tessellations concept, with three models inspired by the work of the Dutch artist Maurits Cornelis Escher. A mechanical self-winding movement, entirely developed and crafted by Vacheron Constantin, approved in accordance with the new Hallmark of Geneva criteria.

Painting, engraving, sculpture and the decorative arts in general are worlds through which human talent and personality weave close ties with time. The Vacheron Constantin Métiers d’Art collection conveys the brand’s deep-felt attachment to culture. The “Métiers d’Art – Les Masques” timepieces launched in partnership with the Barbier-Mueller Museum, as well as the “Métiers d’Art – Chagall & L’Opéra de Paris” and “Métiers d’Art – La Symbolique des Laques” series, all made their own contribution to a vision of time that requires the human touch in order to shine.

Offering a fresh illustration of this subtle alchemy, the Métiers d’Art Les Univers Infinis series was also born from a determination to pay tribute to creativity, and lends Fine Watchmaking a whole new face that is both graphic and contemporary, stemming from a blend of mathematics and aesthetics. Inspired by the periodic paving technique known as “tessellation” – and in particular by the work of Dutch artist Maurits Cornelis Escher – the Métiers d’Art Les Univers Infinis collection embodies several artistic arts exercised within the Manufacture: enamelling, gemsetting, engraving and guilloché work.

The dials on the Métiers d’Art Les Univers Infinis reflect a sense of geometry, symbolism and motion, thereby suggesting an infinite juxtaposition of different universes. Meticulous work has been effected on the colour shades so that the various hues on the Métiers d’Art Les Univers Infinis are harmoniously combined so as to enable the themes to intersect without superseding each other. The rendering is exceptional and elicits a wealth of emotions, with the traditional crafts applied to watch exteriors serving to reinterpret the selective paving technique and create an incredibly mesmerising effect.

Calibre 2460, a mechanical self-winding movement
At the heart of these three timepieces beats Calibre 2460, a mechanical self-winding movement bearing the prestigious Hallmark of Geneva. Entirely developed and crafted by Vacheron Constantin, it boasts exceptional reliability matched by excellent manual finishing in keeping with the grand Geneva Fine Watchmaking traditions. The polished angles, hand-drawn flanks, circular-grained mainplate, bridges adorned with a Côtes de Genève motif and the oscillating weight featuring the elegant crossweave guilloché pattern, are all visible through the sapphire crystal case-back.

Dove Watch: engraving, champlevé enamelling, guilloché work and gemsetting
Inspired by a drawing by Maurits Cornelis Escher, the dial of the Dove watch features a depiction of doves in flight, sublimated by the prestigious Fine Watchmaking arts: engraving, Grand Feu enamelling, gemsetting and guilloché worked are intertwined like tessellations to form a resplendent décor. The white gold case is highlighted by a slender bezel ensuring a generous dial opening swept over by elegant hollowed hands. The case frames a work of art born at the hands of four master artisans within the Manufacture.

The engraver begins by drawing the outline of the doves on a yellow gold dial base, before proceeding to “champlever” them, meaning engraving the motif before the enameller fills the cavities thus formed. This meticulous operation calls for infinite precision, since the repetitive symmetry of the drawing cannot tolerate any flaws. Then comes the turn of the enameller. The infinite range of colours and nuances stems from the various oxides that may be associated with enamel, and of their combinations. It is up to the artisan to create and choose the perfect harmony of the shades which, once bonded by firing in the often, create this radiant violet hue. The enameller completes his task by applying a translucent enamel coating to the violet birds. For their white counterparts, he opts for an opalescent enamel that reveals the engraved motifs and creates a striking depth effect. Once the enamelling is complete, the gemsetter highlights one of the doves. The diamonds chosen for their lustre and their clarity emphasise the graceful flight of the bird, drawing the gaze towards its crystal-clear luminosity.

Finally, the guillocheur, the master of relief, does his part in accentuating the depth effect of the dial. Due to the extreme difficulty of this process, it is extremely rare for an enamelled piece to be guilloché-worked as a final phase. The expert takes the time required to patiently incise the material and thus create a truly lifelike depiction of the doves. 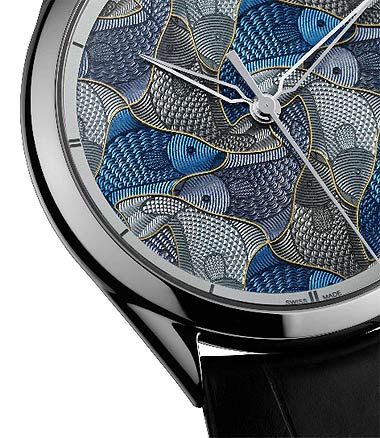 Fish watch: guilloché work and cloisonné enamelling
Subtly graded shades of blue and grey form a shoal of intertwining fish. Born from an association between guilloché work and cloisonné enamelling, this “Métiers d’Art – Les Univers Infinis” watch is inspired by a work by Maurits Cornelis Escher. The pattern is cut out from a white gold dial base and the eyes of the fish are meticulously engraved. The guillocheur then forms tenth of a millimetre symmetrical motifs, while displaying extreme dexterity and genuine artistic sensitivity. Parallel curves accentuate the head, tail and fins, while the body of the fish is covered with shiny scales. The enameller marks out the outline of the motifs using a fine gold wire to separate the various enamel colours, a process known as cloisonné enamelling. The enamel is finally placed in each fish and fired in an oven at a very high temperature, an operation that the artisan will repeat several times in order to intensify the colour. The last firing is followed by a lapping/polishing operation designed to position the partition wires on the same level as the enamelling, and glazing – meaning applying a layer of varnish – that give the dial a radiant glow.

Shell watch: engraving and champlevé enamelling
Shells and starfish form a luminous ochre-tinged seabed swept over by slender light skeletonised hands. The interlocking shells and starfish stage a fascinating dance which, depending on the light, showcases various details of their anatomy. Crafted using engraving and champlevé enamelling techniques, the dial of this “Métiers d’Art – Les Univers Infinis” watch is inspired by the work of the artist Maurits Cornelis Escher. First of all, the engraver traces the shapes of the shells on the dial using a drypoint and then hollows out the fields or cavities while protecting their outlines in order to create a relief engraving using this champlevé technique. Then comes the turn of the enameller, who fills the cavities with enamels before firing them several times at a temperature of 800° to 850°C. Several firings are required to complete this work, which is perfected by lapping-polishing and glazing-varnishing. The engraver sets the final touch by engraving the surface of the starfish. The champlevé enamelling technique calls for excellent mutual understanding and cooperation between the two artisans and which will strongly influence the final result, since any discordance could jeopardise their joint work.

Art of tessellation: mastering space
Born in the mists of time, the art of tessellation – or paving – has been cultivated by numerous civilisations and oriental cultures. Named after the Latin word tessela, meaning paving stone or tile, tessellations are small interlocking squares that form a motif which occupies the entire space of a picture without leaving any gaps. It was doubtless the Moors who raised this technique to an authentic art form in the period stretching from 700 to 1500 AD, since the Islamic religion forbade them from representing human beings and any real objects. Over the centuries, these motifs appeared on pottery, tapestries, mats, wooden and tinted glass sculptures, among other media. The art of tessellation has also been a source of interest for mathematicians, who have viewed it as an artistic expression of their science and their logic. Such scholars include Archimedes, the famous Greek scientist form the 1st century BC, who studied geometrical paving; as well as the astronomer Johannes Kleper, who presented a certain number of polygonal tessellations in his work entitled Harmonice Mundi. One of the most famous contemporary exponents of this art is Maurits Cornelis Escher, whose work shed light on and gave shape to various abstract mathematical concepts. 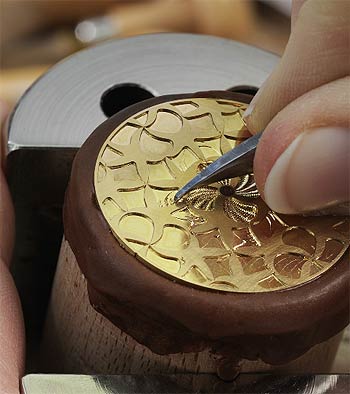 Dutch graphic artist and engraver Maurits Cornelis Escher (1898-1872) based his work upon subtle plays on architecture, perspective and space. Admirably associating perfect execution and imagination, he was a past master of the art of toying with visual senses and even reason in order to
invent new spatial representations and worlds that exist only on flat surfaces. His travels to Spain instilled in him a passion for the paving technique of which he saw some remarkable examples in the Moorish tiles of the Alhambra in Grenada, and the Cordoba Mosque. Mosaics and their symmetry show how a surface may be divided and filled with similarly shaped figures, contiguously positioned so as to leave no gaps. This approach encouraged Maurits Cornelis Escher to interpret, describe and exhaustively classify the various ways of juxtaposing motifs. This empirical work delighted and impressed scientists, especially crystallography specialists and physicists. Comprising a strong mathematical element, his work lies on the borderline between art and science. For the artist, the possibility of replacing the abstract geometrical shapes of the motifs by figurative designs became a genuine passion and an infinite source of inspiration.

Caliber
2460 SC, developed and manufactured by Vacheron Constantin
Stamped with the Hallmark of Geneva

Limited edition of 20 pieces for each model. Not numbered
Only available through the Vacheron Constantin Internal Boutiques