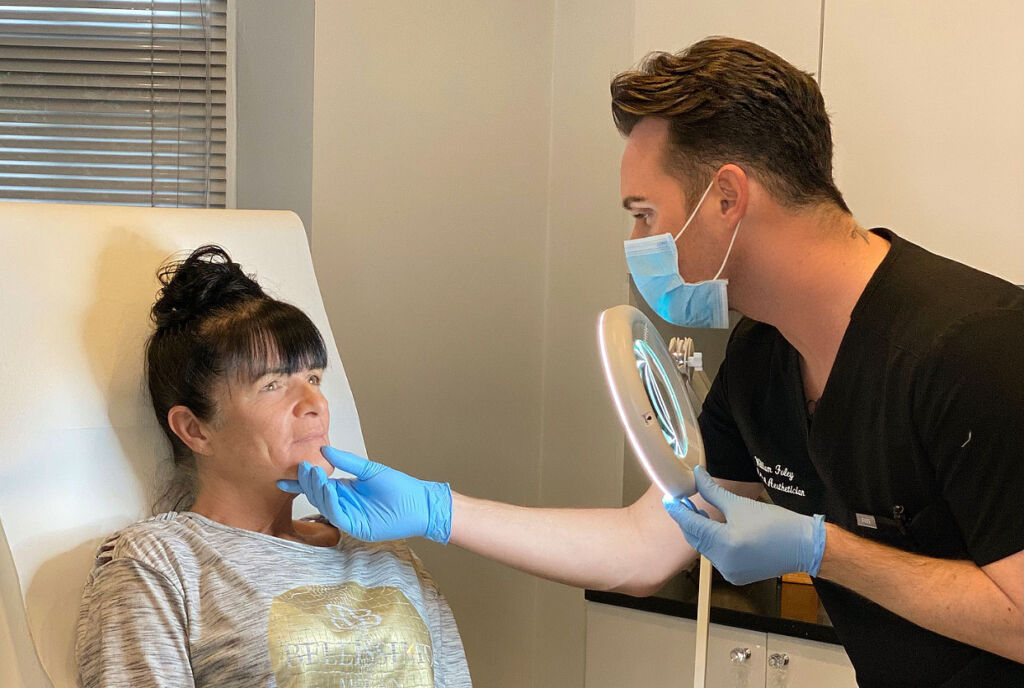 Thread Veins are tiny veins visible underneath the skin which left untreated, can spoil all the hard work you put into making your skin look its best. To find out what can be done to rid yourself of them. I popped over to Alderley Edge for a sit down chat with William Foley, a medical aesthetician at One Aesthetics Studio.

Let’s be honest; the past twelve months can hardly be considered inspiring. Anything to make things seem a bit better while increasing one’s confidence will be welcomed by all. Looking good is always a sure-fire way to create a positive mindset, and one of the best places to start is with the face.

Thread veins were something I paid little attention to until recently. My father is in his seventies, and last year during one of the few times I was able to get within touching distance of him, I noticed dark red patches on the sides of his nose.

I asked him what they are, and he told me they were thread veins. I said to him, “if I were you, I’d be getting rid of them or covering them up.” he said, “that’s life son, you get them, and there’s nothing you can do about it.”

That got me thinking, ‘nothing you can do about it, eh?’ I popped onto the internet and started to do some research. 100s of purported cures appeared, many of which sounded ridiculous. Amongst these were specific qualified treatments, and some names I recognised; One Aesthetics Studio, along with William Foley.

Fortunately, I’ve met William previously, so after getting in touch, we arranged to meet up in Alderley Edge where I could learn more about thread veins and find out what ‘proper’ treatments were available.

If you are not familiar with One Aesthetics Studio, it is one of the go-to places for anyone requiring aesthetic treatments in the North West. The studio is led by Miss Jonquille Chantrey, one of the leading aesthetic doctors in the world and a face seen frequently on British TV screens.

Alongside Dr Chantrey is an expert team comprising of Doctors and aesthetic specialists, including William Foley, a man with the smoothest skin I have ever seen. The most accurate words I can use to describe it is polished marble!

What follows is an edited transcript of my educational session with William.

LM: Thanks for taking some time out to talk to me. Let’s begin with the basics, what are thread (spider) veins, and what causes them?
William Foley: Thread veins are small superficial vessels that are visible from underneath the skin. They are found on the face and body and are not always visible. Due to certain factors, they tend to show on some people more than others. A persons job and the type of environment they work in can cause them to become more visible. For example, those working outdoors in harsher environments are often more prone to getting them.

LM: What can people do to prevent more from forming?
William: Genetics are a factor to some extent, but first and foremost, we need to limit our exposure to the sun. If this isn’t possible, a strong SPF cream or lotion should be used by those who spend a lot of time outdoors. Without a good quality protective screen, thread veins stand a far greater chance of forming along with other unsightly facial blemishes and associated skin problems.

Exercising and having the correct diet is, in my opinion, extremely important too. For example, consuming a large amount of caffeine and too much spicy food can contribute to the problem.

There are some simple things people can do to help. For example, taking a warm shower instead of a hot shower. Another thing I’d recommend is using medical-grade skincare products as this will help to reduce underlying skin issues such as rosacea, lessening the redness of the skin, which will result in a clearer complexion.

LM: There are many purported cures on the internet. Can any of them help?
William: There’s plenty of ‘home-grown’ treatments out there claiming to help with thread veins, such as Massaging ginger tea onto the area or even applying apple cider vinegar to the area to help reduce the appearance. How effective they are, I don’t know as I haven’t tried them myself. Personally, I’d always advocate the safest and most results-driven route for my patients, which are clinically proven to get the best outcome.

In the clinic, my go-to procedure would be the Thermavein treatment; it’s safe and effective with instant results. My patients literally see the thread veins vanish right before their eyes, resulting in an instant boost to their self-confidence. As we know, small things like this can have a hugely positive impact on someone’s everyday life.

The way the Thermavein treatment works is by focusing on the veins walls. It seals them by using radiofrequency at a certain temperature that is not harmful to the skin and doesn’t cause PIH (post-inflammatory hyperpigmentation), unlike some lasers that are used on the market.

LM: If you have thread veins, is it better to have them treated now and is their a risk they will look worse in time?
William: If you have thread veins, it’s certainly better to get them treated as soon as you notice them, as more can occur over time and make the problem appear even worse. It’s extremely important to remember if you want to prevent thread veins, have a healthy lifestyle and avoid excessive alcohol and smoking. Again, avoid prolonged exposure to the sun and remember to protect the skin with an SPF 50. My recommended product for protecting the skin would be the SkinCeuticals UV brightening defence.

LM: What is involved with the Thermavein treatment you offer?
William: Thermavein is a device that uses thermocoagulation to seal the vein walls by using energy from radiofrequency at 4mhz. This is delivered by a small gauge insulated needle. The result of this is a denaturalisation of the proteins in the vein walls, which changes the structure of the veins, making them stick together and sealing them. This prevents the blood from flowing through the vein, causing them to disappear.

My patients are thrilled with the instant results and find the procedure relatively pain free, unlike other devices on the market, such as lasers and IPL machines.

LM: How many laser treatment sessions are required?
William: All patients are different, and some may suffer from more thread veins more than others. Some of my patients who have one or two and will just need one treatment and will not need to see me for further treatments, just a skin review. Other patients I see that have quite a lot of thread veins would need to see me maybe twice or even three times over a six week period.

In conclusion
Armed with a significantly better understanding of what thread veins are, I now know that should I start getting them, there’s a simple treatment available. The fact the Thermavein treatment provides instant visual results and is said to be relatively pain-free should alleviate many readers reservations.

It appears my father’s words to me; “There’s nothing you can do about it,” were incorrect. When the days come when some semblance of normality return, my dear old Dad will likely find he has a surprise appointment arranged at One Aesthetics Studio for a thread vein removal treatment with William Foley. 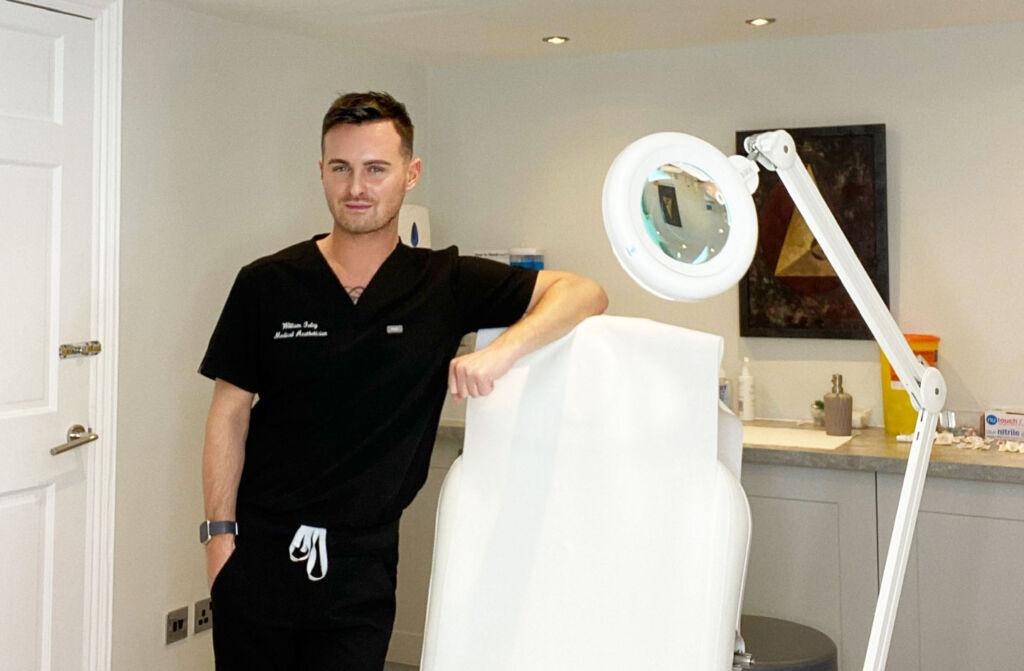 William Foley at One Aesthetic Studio – Where and how?

For appointments and information on the range of treatments provided by William Foley and the team at One Aesthetics Studio, please visit oneaestheticstudio.com.